Let's begin with some hard questions.

Our family WhatsApp group, consisting of a cross section of three generations of strong-minded females, ranging from the late teens to the mid-eighties, often indulges in good-natured banter and spirited discussion on current topics. Recently, we had a debate that was so robust that it bordered on the ferocious. The point of contention was Padmaavat; more specifically the open letter against the movie and its strong rejoinder. Opinions were thrown around like missiles by the feisty women while the men lay low, afraid to put forward any thought lest they be lynched with words. One brave male attempted to lighten this combative cyber sphere with a joke that had us all in splits. The joke was: Sanjay Leela Bhansali is planning to direct Akshay Kumar in his next film based on Rasikbhai, the man who invented the revolutionary herbal digestive Kayam Churna. The film is titled Padnaa Mat (don't fart).

Indian humour is getting seriously funny. The joke unlatched the bolt of my mind's Pandora box, releasing simmering thoughts about the three Ps afflicting Indian society - patriarchy, pottyarchy and periodarchy.

While patriarchy has deep roots in the psyche of Indian men, what hit me was that pottyarchy, too, is a gut-wrenching reality. Swachh Bharat, with its focus on training people to use toilets, is a clear indication of the muck that has piled up in Indian minds, not to mention in their immediate environment. We are bombarded with advertisements largely targeting men, advising them to use toilets themselves and to construct toilets for their women.

The movie Toilet - Ek Prem Katha, released in August 2017, was a satirical comedy in support of the governmental campaign. Thankfully, some rowdy group of shitty characters with undigested anger did not emerge from the bowels of the earth to form a Potty Sena, to rip apart the movie claiming that it was against Indian culture due to the absence of any mention of sanitation in our religious texts. 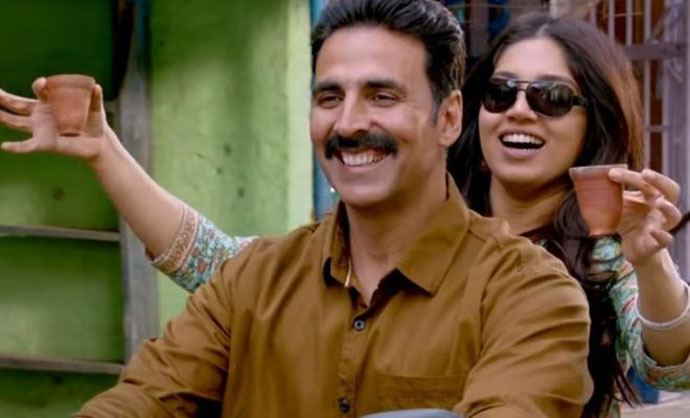 While there is evidence of a sewage and drainage system in the Harappan Civilisation, the epics, Vedas or historical sources find no mention of this touchy topic except in the context of the untouchables, whose job was to clean the bodily waste of other castes. It is rather paradoxical that those who cleaned the society's environment were relegated to the outskirts of society.

Coming back to current times, what is evident from government advertisements and the movie based on a real incident from Madhya Pradesh is that pottyarchy is largely a male bastion. Let's begin with some hard questions. Don't most men, even those with easy access to toilets, believe that it's their birthright to use public places as urinals? Do they ever wonder why females never urinate in public places? The answers are obvious. Women, from the time they are young, are trained to control their bodily functions while young boys receive no such training. Pottyarchy originates in each household, constantly spreading its stinky tentacles into the rest of the country.

Why is it almost impossible to potty-train the Indian men? I think it's because their minds are as twisted as their large intestines preventing free flow of thought. The movie Toilet - Ek Prem Katha shows the male head of the family opposing having a toilet in the house, while his son takes up cudgels against him to build a toilet for his wife. It's male versus male. One advertisement shows a man proclaiming that it's healthier to defecate in the fresh air till some village children make him see sense. The fact that most government-run advertisements target men further emphasises the point.

Pottyarchy is a stinky dropping of this gargantuan creature called patriarchy that is alive and kicking. The movie Padmaavat was released after a furor because a fringe group decided that it was anti-Rajput without viewing it. The release of the movie after great social, political and judicial efforts was a triumph of freedom of expression. But it was too good to last. Now the problem was that the movie glorified patriarchy, reducing women to a mere body part.

First there was a sensational open letter by a not-too-well-known actor Swara Bhaskar who wanted a piece of the Padmaavat popularity-pie followed by a scathing rejoinder by Siddharth-Garima, who scripted the movie Ram Leela. These pieces of crafty penmanship had the vocal females of our family taking contradictory stands despite all of them being on the same side of feminism.

Gripping their smart-phones purposefully, each was ready to defend her stance. The moderates believed that the movie was purely for entertainment. The intellectuals declared with a certain amount of hubris that creative people have a right to freedom of expression. The radicals agreed with Swara.

As I read the vigorous exchange, I found myself sitting on a pointy fence that was digging rather uncomfortably into my well-cushioned bottom. Some arguments by Swara about women having the right to live after rape and after the death of their male protectors made sense, but I also agreed with the writer duo's view that feminism means having the right to choose, to take a stand. These sharply opposing points of view poked me as I shifted uncomfortably on the fence.

My comfortable spot was not easy to find as I mulled over the fact that everyone seemed to have gained from this controversy. Sanjay Leela Bhansali was laughing all the way to the bank. Karni Sena and Swara Bhaskar, who were relatively unknown names, have become small "celebrities". The only people who suffered were ordinary citizens and those children who were caught up in the unnecessary rioting. I questioned the wisdom of the timing of Padmaavat in an era when India's fight against patriarchy is gaining momentum, but at the same time I am a true believer in the freedom of artistic expression.

I have serious reservations about the almost exploitative usage of the V-word by Swara to garner attention but I also believe that artists need to focus on subjects that bring about social change. We need more movies like Toilet - Ek Prem Katha that make relevant points and less movies like Padmaavat that make absolutely no point except to indulge the creative expression of a filmmaker.

Then there's periodarchy, a bloody offshoot of patriarchy where women are discriminated against because of their natural cycle. It's rather comical how men, known to be great warriors and conquerors, were so queasy about a small amount of blood; how men who saw bloodshed were so discomfited by some harmless shedding of blood. So they declared women to be impure during "those" days, not allowed into places of worship, religious ceremonies or cook food in their kitchens.

Imagine if all the women of the house by some coincidence ended up being "impure" on the same days! Who would cook for the kids and the men? I have this gleeful mental image of men toiling in the kitchen while women take a much needed break, waiting for a hot meal. Sigh!

Periodarchy is being taken head on by Padman, a movie that makes sense. Inspired by the life of a Tamil Nadu-based social activist who revolutionised the concept of menstrual hygiene in rural India, this movie also tries to remove the taboo associated with menstruation. The subject tends to make most men run for cover and women talk in hushed tones using code words. Some form of periodarchy, mild or radical is ingrained deep within us all.

So all I want to ask is, with patriarchy, pottyarchy and periodarchy: Hey India! What's up?

#Akshay kumar, #Periods, #Patriarchy, #Padman
The views and opinions expressed in this article are those of the authors and do not necessarily reflect the official policy or position of DailyO.in or the India Today Group. The writers are solely responsible for any claims arising out of the contents of this article.

Editorial professional with over 25 years of experience in print, publishing and digital media.