Pahlaj Nihalani should stay on as head of Censor Board. Said no one ever

If reports are to be trusted, Pahlaj Nihalni – the grand old uncle'ji with a kink for chopping off scenes that affect his delicate, ultra-conservative sensibilities – may soon be out of work.

A meeting of Central Board of Film Certification (CBFC) members has been called by Nihalani in Thiruvananthapuram on July 28. Times of India reports that sources inside the ministry of information and broadcasting have indicated that Nihalani, the Censor Board’s tyrannical, moral policing and sanskari chief, may be replaced. The report further speculates that filmmaker Prakash Jha and television producer/actor Chandraprakash Dwivedi are being considered as his replacement.

It would be a great day for the CBFC, Indian cinema and the whole country in general if Nihalani were to get booted out. And there is no dearth of reasons why. Pahlaj Nihalani is scared of way too many things. You cannot be in a position of power if you are afraid of ideas.

Nihalani is afraid of sex

We're the second most populous country in the world and this man feels that Indians should not see sex in films. What is he afraid of? That Indians who see intimate moments in cinema might suddenly get more affectionate in the confines of their bedrooms? In fact, so afraid is this man of sex that he wanted the word "intercourse" removed from the upcoming Shah Rukh Khan-Anushka Sharma film When Harry Met Sejal.

He lives in fear of liberation, not just of the sexual kind but also of ideas, and expressions. Nihalani is afraid of shifting from a sanskari status quo. 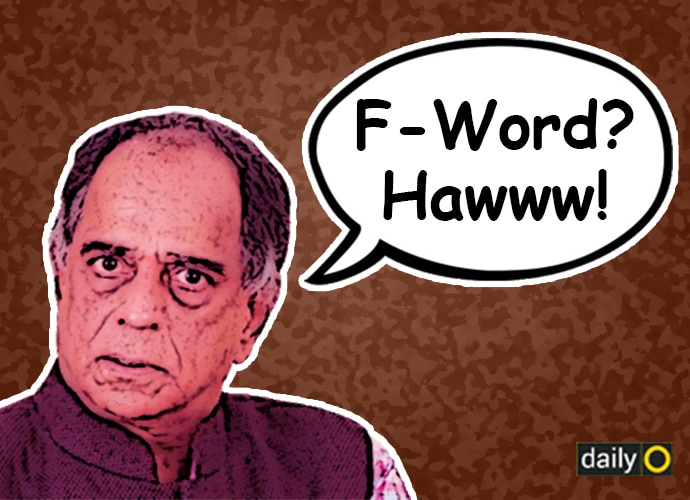 He is afraid of lipsticks

Lipstick Under My Burkha is a rare example of a film managing to escape from the scissor-friendly clutches of the CBFC under Nihalani – well, almost. The film was initially refused certification for being “too lady oriented”. According to the CBFC, the film had, “contanious sexual scenes, abusive words, audio pornography and a bit sensitive touch about one particular section of society”.

Of course, in the end the film won and everyone got to see what irked Nihalani. A wonderful piece on The Ladies Finger points out that Nihalani afraid of lipsticks, because “lipstick is a sign of defiance”. Nihalani, thus, is afraid of women breaking away from gender roles, societal norms, conservative barriers and “log kya kahenge”.

He is afraid of upsetting oversensitive Hindus

According to a report, a sequence from the new Anushka Sharma- and Diljit Dosanjh-starrer Phillauri, which shows actor Suraj Sharma reciting the Hanuman Chalisa in the bathtub in a ghost’s presence, has been asked to be deleted. The CBFC felt that ghosts are supposed to be eradicated, not pacified with the recital of the Hanuman Chalisa, and hence it is a sequence that just can’t stay.

“This amounted to hurting of religious sentiments. The CBFC has asked for the Hanuman Chalisa to be removed from the soundtrack. All that the audience will hear now is Suraj's long droning chant which would be inaudible,” said a source inside the CBFC.

This frivolity, however, is sadly the tip of the iceberg when it comes to Pahlaj being afraid of hurting Hindu sentiments. For Ka Bodyscapes, this Nihalani aspect was much more of a hurdle. According to the CBFC, “…the entire content of the Malayalam feature film Ka Bodyscapes is ridiculing, insulting and humiliating Hindu religion, in particular portraying Hindu Gods in poor light. Derogatory words are used against women. The Hindu god, Hanuman is shown as coming in the books titled I am a Gay and other homosexual books [sic].”

Not just that, the CBFC has a problem with filmmaker and academic Suman Ghosh’s documentary on Amartya Sen, The Argumentative Indian containing the words “cow”, “Hindutva view of India”, “Hindu India”, “Gujarat”.

Filmmaker Alankrita Shrivastava said that she was made to "feel like a criminal” by the Censor Board chief. Having been forced to certify and release Lipstick… by Film Certification Appellate Tribunal (FCAT), Nihalani was obviously sour.

"These are tactics to draw attention to her film. You tell me, what's the only point of curiosity about the film? That the [CBFC] Examining Committee rejected her film? She has been cashing in on that for months now,” said Nihalani.

He added, "She is a liar. I was never aloof, rude or uppity with her... I very clearly remember asking her to sit. She didn't respond. I told her that her film was rejected by the Examining Committee. She said she knew that would happen. It was a civil, to-the-point conversation. How did it make her feel like a criminal? I fail to see why she continues to flog the CBFC and me to get her film noticed, rather than have people talk about it for its intrinsic merit. Does the film have anything else to recommend itself other than the fact that it was questioned by the Censor Board?"

A film that beautifully portrays women from different sections of the society defying norms, with power packed performances from both newcomers and thespians, has nothing else to brag about other than the fact that a bigoted, sexist, old man tried to stop it from being screened? Bravo, Pahlaj. You sometimes outdo yourself.

His pettiness doesn’t end there. Pahlaj Nihalani sent Wizcraft International, who organised IIFA 2017, a five-page legal notice objecting to the use of his picture and the “denigrating title of watchman,” describing the skit as a “sordid attempt to increase TRPs.” He also demands a public apology, a retractment of the footage broadcast on Colors and declaration IIFA will not defame him in future.

Nihalani once said, “We are sneered at here for being sanskari and over-conservative. But we’ve been more liberal in the censor certification of films like Befikre, Ae Dil Hai Mushkil and Rangoon than many countries abroad. But of course, no one notices when we’re liberal.”

The CBFC is a body constituted under the Cinematograph Act, 1952. Although, when it was created it was called the Board of Film Censors, its powers of certifying a film was introduced by way of an amendment in 1959. It is true that CBFC can ask for parts of the movie to be cut or removed before showcasing it in public in case it is “against the interests of the sovereignty and integrity of India the security of the state, friendly relations with foreign states, public order, decency or morality, or involves defamation or contempt of court or is likely to incite the commission of any offence”.

But ever since the appointment of Pahlaj Niahalani, the Board seems to have become more tyrranical than ever. After the Udta Punjab row, the Bombay high court asked the CBFC to not be over-sensitive in matters of art.

Nihalani’s style of silencing all that goes against the supposed "Bharatiya sabhyata", be it empowerment of women through sexual liberation, or the acceptance of homosexuality (rather the lack thereof), and mollycoddling the Indian audience by acting as a gatekeeper of what’s appropriate and what’s not, is in line with the workings of the saffronised centre. Nihalani once even proudly proclaimed, “Yes, I am a chamcha (acolyte) of Narendra Modi as Anurag Kashyap said. I am proud to be, a Modi chamcha.”

As was rightly pointed out by Gautam Chintamani in an op-ed, “At a time when Indian cinema is truly coming of age in more ways than one, someone like Nihalani is the last person to expect anything halfway sensible from.”

The day Pahlaj Nihalani gets ousted from the CBFC will be the day to celebrate.

Also read - My childhood was ruined because Pahlaj Nihalani wasn't there