Why the Pondy Lit Fest is caught in an ideological crossfire

Organising a festival of letters, arts and ideas, which I am doing for the first time as the co-curator of ‘Bharat Shakti: The Pondy Lit Fest’ (PLF), August 17-19, 2018, is such an onerous responsibility not to mention a huge headache. I have just learnt, as I send this column, that our venue partner the Alliance Française de Pondichéry (AF) has backed off from being our venue partner.

I would not like to construe gloomy motives for this last-minute pulling the plug. After all, the president of the local AF, Lalit Verma, is also the co-curator of the festival. I am sure he must have faced unprecedented pressure from the Alliance Française Foundation in Paris, which already put out a press release without informing him, regretting its association with the festival.

Now, with the added and unexpected demise of former Prime Minister Atal Bihari Vajpayee on August 16, all public functions in Puducherry have been cancelled. The sudden passing of a great leader, who was himself a journalist, poet, writer, intellectual, must have tipped the balance.

This mischance, in addition to the political pressure mounted against the AF, probably influenced his local team members to withdraw its association with the PLF. I am sure Lalit has taken the right decision under the circumstances and is at this very moment scrambling, as all of us in the organising team are, to find an alternative venue.

For the past few days we found ourselves under attack from an alliance of five parties including the Communist Party of India (CPI), Communist Party of India Marxist (CPI-M), Viduthalai Chirutaigal Kattachi (VCK) and Dravida Kzhagam, who held a press conference calling for the cancellation of the PLF. They also condemned the association of AF as a venue of the festival.

We also received other veiled threats of more drastic and disruptive protests. Should I conclude they have succeeded? If so, it is a sad day indeed; the AF has hosted all over India, several speakers of differing views without being forced to close their doors to free speech.

Unfortunately, it is my experience that a section of the Left is not only highly intolerant of differing opinions but does not hesitate to bully or threaten its opponents into silence or submission. If so, isn’t it totally ludicrous of them to claim to be supporters of freedom of expression, dissent, democracy, let alone decency? To be fair, we have also received support from a range of writers, intellectuals, journalists and media outlets considered Left-liberal. Standing up for dialogue, dissent, and free speech, many of them have condemned the attacks against the festival and threats to shut it down. Salil Tripathi, for instance, said: “If they demand that the festival should be cancelled, they are the same as the religious fundamentalists who have sought to stop writers from speaking…’Right wing’ ideology has as much right to be heard and debated in India as ‘Left wing’ ideology.

A free society must have room for debate and dialogue, and disagreements should be debated and discussed.” Noted journalist, Vir Sanghvi tweeted, “This is disgraceful. Stop the Pondicherry Lit Fest because it ‘provides a forum for the right wing’? Every wing has a perfect right to express its views… Stalin and Mao are dead but they are very much around.” 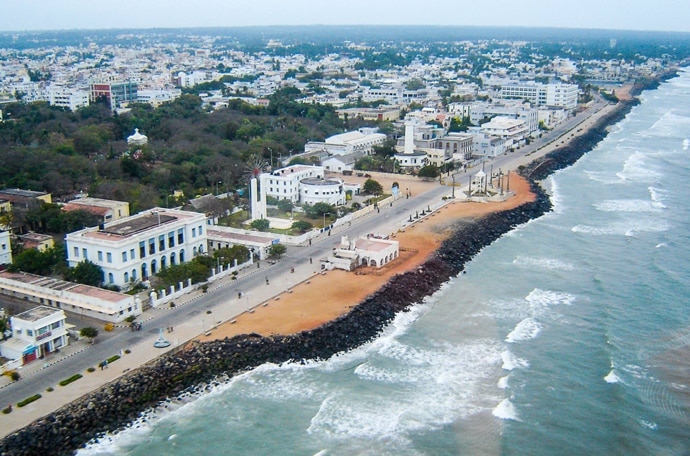 The literary fest is being held in the picturesque town of Puducherry. (Photo: PLF/Facebook)

The upshot is that the PLF has become yet another flash point in the struggle between forces of democracy and intolerance. I am glad to say that we will not let the opponents of free speech stop us. I also hope that next year’s PLF will have a richer and more diverse body of speakers compared to this year’s cohort, which has been perceived as being more Right inclined.

The fact is that we did try to invite writer-intellectuals holding several shades of opinion, but many were unable to accept our invitation. I must also stress that the allegation that the PLF is full of outsiders is also blatantly false. Over half of our more than 100 speakers are local to Puducherry or from nearby areas.

My experience has made me appreciate even more than ever what friends like Namita Gokhale and Anil Dharkar are up against or have achieved. The former, along with William Dalrymple, has created one of the world’s biggest and most successful of literary festivals, the Jaipur Literature Festival.

Dharkar, well-known Mumbai-based journalist, writer, and intellectual, is the director of TATA Literature Live, a high-quality, meticulously organised, unmissable event in the literary calendar of the country. These are just two, perhaps my favourite examples from a dozen or more such gatherings, to which PLF hopes to add its name as the latest and junior partner. I hope we succeed.