The verdict will decide if we want to remain Gandhi's India or descend into becoming Godse's variant of Pakistan.

Even as the media gives its undivided attention to the turf war between VK Sasikala and O Panneerselvam in Tamil Nadu, a far bigger story is unravelling in Mumbai — something that can have massive ramifications for rule of law and democracy.

A division bench of the Bombay High Court is hearing an appeal filed by self-styled godwoman Sadhvi Pragya Thakur, accused in the Malegaon blast case of 2008, challenging a sessions court order that had rejected her bail.

The NIA, which is probing the case, has shockingly told the court that it has no objection if the court grants bail to the terror accused.

This in a way corroborates with what Rohini Salian (who was a special public prosecutor in the case) exposed not only in the public domain, but also in an affidavit before the Supreme Court that she was asked to "go soft on 2008 Malegaon blast accused". 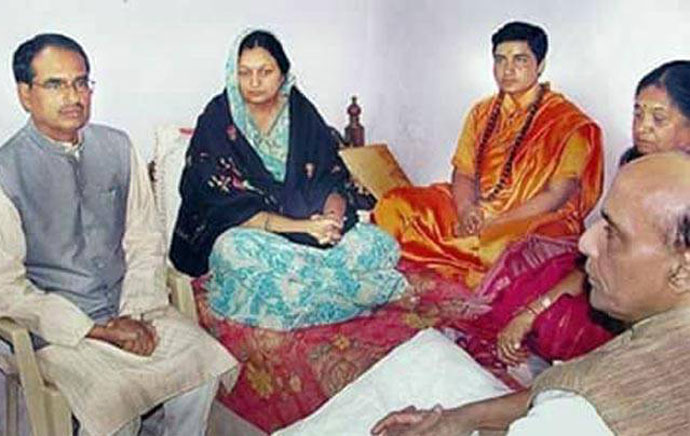 Pragya Thakur has been photographed with several senior leaders of the BJP, including Madhya Pradesh chief minister Shivraj Chauhan and Rajnath Singh.

She went on record to state that ever since the central government changed in 2014, there has been a "clear shift" in the stand against these terror accused who have been openly defended by the BJP and RSS leaders.

Sample this: The current Union home minister, and perhaps the most powerful man in the government after Prime Minister Narendra Modi, said this while he was the BJP chief — “I personally believe that there is a huge conspiracy behind these happenings (the Malegaon investigations) and do not forget that Maharashtra has a Congress-NCP coalition government and this could be part of the conspiracy. This possibility cannot be ruled out”. Rajnath Singh said that in an interview to former editor-in-chief, The Indian Express, Shekhar Gupta.

On Pragya Thakur, a former ABVP national executive member, Singh gave a virtual clean chit saying, “I’m not ready to believe that Sadhvi Pragya Thakur is a terrorist until there is enough evidence against her."

Incidentally, Thakur has been photographed with several senior leaders of the BJP, including Madhya Pradesh chief minister Shivraj Chauhan and Rajnath Singh himself.

Imagine if a Muslim leader made such a statement in favour of an Indian Mujahideen or an ISIS terror accused? What would the media say?

And this despite the fact that several cases against Muslims for their alleged involvement in terrorist activities have been "dismissed" by the courts after 10-15 years. The Akshardham terror case of 2002, wherein all six convicts were acquitted by the Supreme Court after nearly 12 years, is one of the examples.

Rajnath Singh's "conspiracy theory" line on the right-wing terror accused was parroted by almost all BJP leaders. This despite the fact that it was top cop Hemant Karkare (who died fighting terrorists during the 26/11 Mumbai attacks), who headed the Maharashtra ATS that had unearthed the link between right-wing groups and the Malegaon blasts. Any attempt by the BJP to raise such conspiracy theories are a direct assault on the integrity and commitment of Karkare.

Besides, former home secretary and current BJP MP RK Singh had also come on record to state: "Yes, during investigations we have found names of at least 10 persons who have been associated with the RSS at some point or the other."

The question is simple — If right-wing terror (which I do not and will not label as Hindu or saffron terror) is a work of political conspiracy, as Rajnath Singh suggested, then why did the BJP make RK Singh an MP? He has not retracted that conclusion and stands by it. Clearly, he was a part of the said "conspiracy" too.

Now, the NIA reports to the MHA headed by Rajnath Singh, whose view on terror accused such as Pragya Thakur, is evidently sympathetic. Can the NIA be expected to conduct its investigations and prosecutions independently?

To make the NIA even more pliable in a rare move, the Modi government gave a second extension of one year to IPS officer Sharad Kumar by re-employing him as director general of NIA for a period of one year.

In effect, he has been hired on a contract, which is unprecedented. Is there a shortage of capable IPS officers who can head the NIA?

Going by the brief perhaps, Sharad Kumar in mid-2016 declared the decision of the NIA not to charge Pragya Thakur was justified as "there was insufficient evidence against her".

He added: "The only material evidence against her was the motorcycle (registered in her name) on which the bomb was kept."  This stand is baffling and a complete U-turn from the earlier stand of investigating agencies in the case.

How can agencies reach two different conclusions on the basis of the same evidence merely because a government changes?

Just imagine if this is the stand of the NIA in Thakur's case what precedent it will set.

Let's assume a scenario — a boat registered in Pakistan is used for a terror attack in India. Will the NIA consider the boat (registered in the name of someone in Pakistan) to be insufficient evidence to link Pakistan with the attack?

In addition, stringent MCOCA charges were also dropped so that the various confessional statements recorded by the Maharashtra ATS could be discarded as evidence by the NIA.

In many cases such as the Ajmer Dargah blast case, which was allegedly planned by RSS activist Aseemanand (as per his confession before a magistrate in 2010, something that cannot be assumed to be under pressure or coercion), dozens of crucial witnesses began turning hostile since the change in government at the Centre in 2014.

This in turn would weaken the prosecution's case against the entire network of right-wing terror involving Sangh parivar activists — be it the Mecca Masjid blast, the Samjhauta Express blast or the Malegaon case.

The NIA chief once again justified witnesses turning hostile by saying that he has "no control over the memory of witnesses" which had "weakened over time".

In June 2016, coming down heavily on the NIA for not investigating the role of Pragya Thakur properly in the 2008 Malegaon blasts case a special court threw out the NIA chief's contentions and observed there were reasonable grounds to believe that the charges against her were prima facie true and went on to reject her bail plea.

Drilling holes in the NIA "clean chit" the court added that at this prima facie stage "the fact of the ownership of the motorcycle cannot be ignored nor could the evidence of Thakur’s “complicity” with accused Kalsangra in executing the blast".

Notwithstanding that the NIA brazenly gave yet another clean chit to Sadhvi Pragya, an accused in the Sunil Joshi murder case.

Sunil Joshi, yet another RSS functionary, was a suspect on the run and was murdered in Dewas. He was believed to be a key link in all these right-wing terror cases. Hence, the matter was given to the NIA in 2011.

Three years later, the government changes and the NIA files a chargesheet before the court that there was no such conspiracy and eventually enabled Thakur to get an acquittal in this case just a few days ago.

Despite what the special NIA court said in June 2016 and also earlier orders rejecting bail to Thakur, the NIA has said in response to an plea filed by the terror accused before the Bombay High Court that it has no objection to granting bail to her.

This means that the NIA, India's premier investigating agency to combat terror, is okay with an accused (that the special NIA court believes to be prima facie involved in a terror attack) walking free.

What is even worse is the fact ṭhat the Bombay High Court in January this year granted bail to three accused in Pune's Moshin Shaikh murder case justifying that the men affiliated with the right-wing Hindu Rashtra Sena were provoked and committed the murder in the name of religion.

This sums up how the entire system seems to be pitted against justice when the victims are Muslims and the perpetrators of terror are those affiliated with Sangh Parivar (I still refuse to label any terrorist as a Hindu or saffron terrorist just like I reject the term Islamic terror) but the moot question here is: will the courts, investigating agencies go out of their way to defend, justify and rescue terror accused?

If this is repeated in Thakur's case, there is no doubt in my mind that the faith of the common man, and particularly the victims of Malegaon blast, in the entire system and in rule of law will be completely shaken.

It is for India to decide which road it wants to take. One where we distinguish between good terrorists (like Thakur and Mohammad Akhlaq's killers, who are given bail or honoured by a Union minister placing the tricolour on them ) and bad terrorists just like Pakistan once did to its own detriment? Or we want to be a country which truly believes that terror has no religion and political affiliation?

I am hoping that the Bombay High Court will follow in the footsteps of the US courts who have shown in standing up against president Donald Trump's ban.

Thakur's bail plea is not an ordinary appeal — it is an most important battle for the Indian democracy against religious fanaticism.

The verdict will decide if we want to remain (Mahatma) Gandhi's India or descend into becoming (Nathuram ) Godse's variant of Pakistan.

#Malegaon blasts, #BJP, #Right-wing terror
The views and opinions expressed in this article are those of the authors and do not necessarily reflect the official policy or position of DailyO.in or the India Today Group. The writers are solely responsible for any claims arising out of the contents of this article.