Shame upon India, BJP is playing as dirty as Congress

After all the hullabaloo leading up to the Gujarat Rajya Sabha polls, Ahmed Patel, political secretary to Congress president Sonia Gandhi has made it to the Upper House, for the fifth time running.

Thanks to the midnight orders of the Election Commission of India, which invalidated two votes of Congress rebels who had proudly displayed their voting preferences to BJP president Amit Shah, Patel has managed to scrape through.

The Congress is now accusing the BJP of sabotaging its candidate and trying all the dirty tricks to spike his election, which it dubs the "dark hour in our democracy".

BJP has accused Congress of playing politics by whisking away or "kidnapping" its MLAs to a resort in Bangalore and "securing their votes under duress", which the saffron party terms a "blot on our democracy", where voting for Rajya Sabha nominees ought to be "free and fair".

August 8, 2017 would go down in India’s Parliament history as a "sad day" not a "dark day" for democracy, for we have few number of days that are not "dark", since all we have is the Congress-BJP tussle on display as the major focus. The rest are fringe players, neither better nor worse. 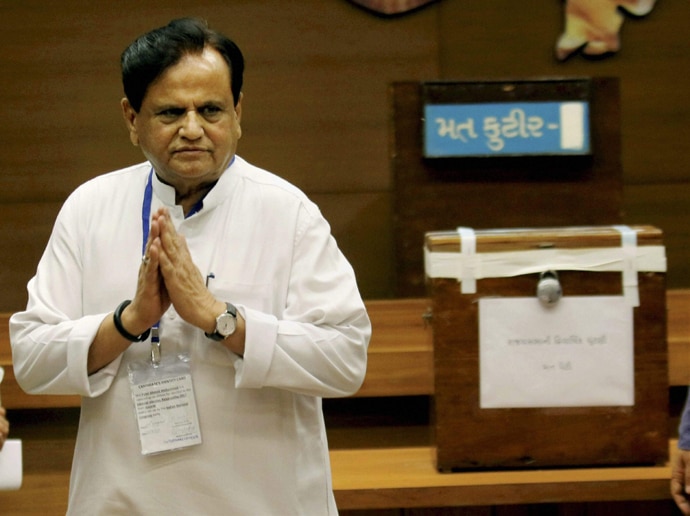 The BJP and other parties kept crying foul and the Congress party - with Ahmed Patel as its pointman - had perpetrated many an ignominy of similar or worse genre. Photo: PTI

The Congress leaders have none but themselves to blame for they were unable to "keep their flock together", without carting them off "against their will" to Karnataka and "herding" them back to vote in Gandhinagar and then "releasing" them only later.

In fact, this is not new for the Congress - which has 70 years of experience, with BJP mostly having been in the Opposition all these years. The BJP and other parties kept crying foul and the Congress party - with Ahmed Patel at the helm - had perpetrated many an ignominy of similar or worse genre.

They are countless, and shall remain a blot on our democracy.

In came Narendra Damodardas Modi - on horseback – claiming to be the man of the moment to "lead the party with a difference" and promising a "Congress-mukt Bharat". BJP leaders have, day in and day out, painted the Congress and its minions in dark hues for demolishing democracy and continue to do so.

When their turn to rule came and they were ensconced in the saddle, well and firmly - they have indulged in crimes of the same kind and in no less darker shades than they accused the Congress of.

Well, the BJP has ensured that the President of India is their man. The vice president elect is also their choice. Nitish Kumar has rejoined the NDA by uprooting his earlier association with RJD lock, stock and barrel and ensuring that the sway of the Congress is down in the dumps. Photo: PTI

Nitish Kumar has rejoined the NDA by uprooting his earlier association with RJD lock, stock and barrel and ensuring that the sway of the Congress is down in the dumps.

If the Uttar Pradesh elections had downed the shutters on the business and commerce of Mayawati's BSP - it was evident when the Dalit icon had to throw a tantrum and leave the Rajya Sabha with just a few months to go in office.

Uttar Pradesh chief minister Yogi Adityanath too is well-entrenched and the BJP has all the numbers going for them.

Not only is the Northeast already in the bag for BJP, and Andhra Pradesh and Telangana on their side, the ruling dispensation in Tamil Nadu too is falling over heels to hug the BJP to cover up its shenanigans.

It is only Karanataka - slated to go to the polls in 2018 - and Kerala, which have remained isolated from the marauding BJP hegemony. 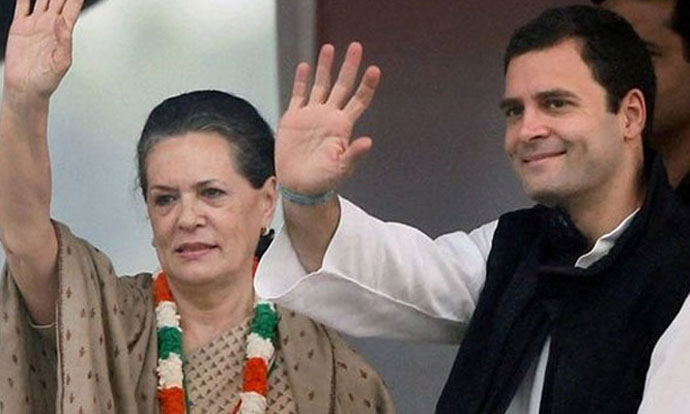 The Congress party - with Ahmed Patel as its pointman - had perpetrated many an ignominy of similar or worse genre. Photo: PTI

Stalwarts in the Congress are engaged in belittling chief minister Siddaramiah so much that the BJP may have little to do to dislodge the present rulers, come the time for hustings in 2018.

Of course, the BJP has aped the Congress in anointing a tainted leader like BS Yeddyurappa as their chief-ministerial aspirant for Karnataka.

The saffron party is keeping tabs with the Congress in every which way.

The Ahmed Patel escapade only shows that the BJP has a lot to learn from what they promised to stand against. The Congress, in its heyday, may not have bungled but delivered a defeat to the targeted.

Yet, the bottomline is that the way the BJP has taken to heart the mere slogan "Congress-mukt Bharat", they are chasing them down seriously. 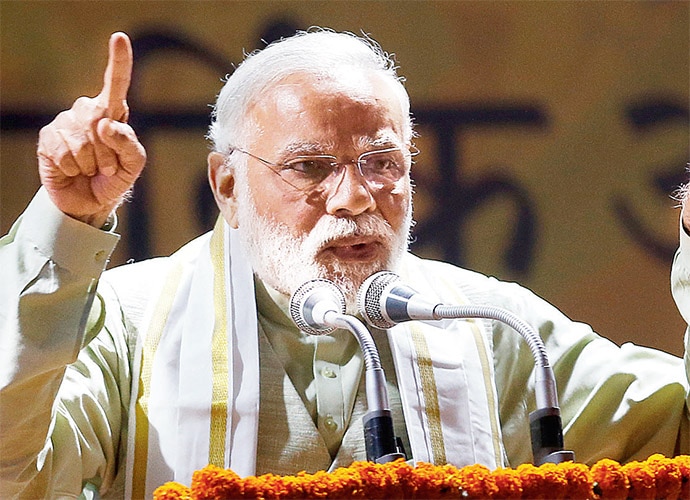 Even if you and your team were working for 16-18 hours a day to deliver on several of your promises during the 2014 general elections - such brazen politicking is despicable. Photo: PTI

The way the BJP went after the elected legislators in Gujarat Assembly, split the Congress - compelling its leaders to be flown to a resort for a joy ride amid the burgeoning flood waters in Gujarat, and timing the Income-Tax raids on their benefactor in Karnataka DK Shivakumar, his brother and cronies - the dirty tricks department of the BJP has been engaged in overtime and overkill, to be specific.

The political environment is entirely vitiated. Chances of these parties and their leaders getting together for any serious legislative business and economic measures have slimmed beyond slimming.

Prime Minister Narendra Modi promised "minimum government, maximum governance" and an "alternate vision" from what we have had all the years since Independence. And the same Modi wants us to take a pledge akin to Quit India movement of August 9, 1942 on several fronts:

"In 1942, the need of the hour was to free India from colonialism. Today, 75 years later the issues are different," the prime minister added."Let us pledge to free India from poverty, dirt, corruption, terrorism, casteism, communalism and create a 'New India' of our dreams by 2022," he said.

It is all very well to pronounce and proclaim. Even if you and your team were working for 16-18 hours a day to deliver on several of your promises during the 2014 general elections - such brazen politicking is despicable.

All his bhakts strongly believe that he is on the right track and what the Congress and Opposition are "getting" in the political arena is what "they truly deserve".

It may be nemesis time for the Congress for all the "protests made by them on the moral plane" fall flat and their track record belies any claim by them to occupy the moral high ground.

Yes, we have seen "it all" from Congress not only in all shades of grey, but in every shade of the darkest black. No matter how loud and hard the Congress protests, it shall never pass muster.

But that, my dear Mr Modi, it does not behove well for the moral high ground you took when you offered to lead the "party with a difference" as the "first chowkidar".

We the people agreed with you and threw out the Congress for what they stood for. Now, if you are inclined to follow their path, even it is to "give it to them", it is shame upon India.

Yes, politics in practice could be mean and politicking unavoidable. But to play dirtier than them while proclaiming holier-than-thou is surely not the party we anointed in office - "a party with (no) difference".

Also read: What Ahmed Patel's victory means for Congress, a party that had forgotten how to win