“That’s my headache. I don’t have to share that information with you,” the ADGP said.

As a journalist, I was just doing my job.

I was standing there to do nothing else, but to report what was going to happen at Sabarimala. I had no intention of disrespecting any culture or tradition. Neither was I planning to climb 18 steps and stand before the shrine to prove anything as the Supreme Court has allowed women of all ages to enter the shrine.

Just a day before I had gone to the Ganapathy temple at Pamba (the first temple from Pamba to Sannidanam) for reporting and went all the way to the temple. There has never been any restriction in the temple, unlike Sabarimala.

But yesterday I was stopped at Nilakkal — the Sabarimala base camp — by some self-proclaimed devotees, who, according to them, were just protecting their lord through a peaceful protest; singing hymns and chanting prayers. 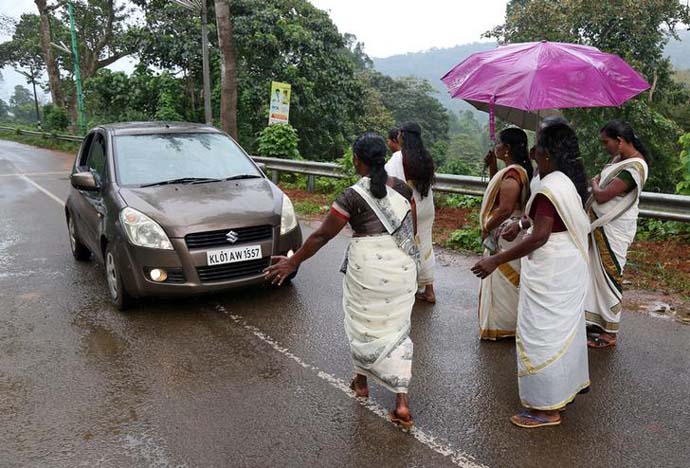 The self-proclaimed devotees, which included many women, stopped each and every car. (Photo: Reuters)

But the peaceful protesters were running to every single vehicle to check whether there was any young woman sitting inside. They were not even asking the vehicles whether they were heading towards Sabarimala or somewhere else. Every car with a young woman sitting was asked to go back, including media vehicles. They even stopped some media cars and pulled women journalists out and abused them in Malayalam.

The ‘peaceful protesters’ then stopped a KSRTC bus and abused six students who didn’t know Malayalam.

It was mayhem. I was caught in the middle of it. Police personnel were there. But what were they doing? They took photos of the students and their identity cards, while the protesters were hurling abuses in the name of God.

By the evening, the ‘mute spectator’ that the state police was so far became active — not to take the ‘peaceful vandals’ to task, but to stop the buses, making way for the protesters to check if there was any young woman inside. What happened at Pamba on Wednesday was absolutely unacceptable. (Photo: Reuters)

The ADGP, south zone, had a solution in hand for those who were complaining of police inaction. “File a complaint. Action will be taken,” he said. He was right there at the spot throughout, witnessing everything.

What happened at Pamba on Wednesday was absolutely unacceptable. In the name of peaceful protest, they smashed cars, equipment and threatened us. Some women journalists were even physically assaulted by these “devotees”, and as the day was progressing, their numbers were only increasing.

If the media saw it coming, why did the state not see it?

Women journalists who reached Pamba in the morning before the “vigilantism” started are now stuck there. Others, like me, were stopped at Nilakkal only. And there was an incessant flow of people coming up to me and asking me to leave. Otherwise, they would damage my car and beat me up. The threats were straight and open. I was not even allowed to stand in one place for more than five minutes, as they were following me constantly. A woman threatening to commit suicide in protest against the Supreme Court verdict. So we all knew what was going to happen on Wednesday. (Photo: Reuters)

At one point of time, I asked ADGP Anil Kant, “Sir, What are you going to do about this?”

“That’s my headache. I don’t have to share that information with you,” he said.

What he did we don’t know because the reporters were stuck amid nowhere — no sleep, water, food, and network.

The government and the police will have to answer a lot of questions.

As a person who calls Kerala her home, where is my safety and security?

I didn’t want to go up to the temple. That was not my fight yesterday. I wanted to do my job without being heckled in ‘God’s own country’.