My intent was to call out those women who say women wearing saris look older, backward, or culturally repressed.

To begin with, allow me to sincerely apologise for the words that I used while answering impromptu questions at a conference at Harvard. I am sorry that I used the word "shame" in reference to some women's inability to wear a sari. I truly regret that the way in which I tried to make a point about the sari enabled it to be interpreted as misogynistic, patriarchal, and non-inclusive - this was certainly not my intention.

Let me provide some context for those of you who may not have heard the speech I gave at Harvard. A woman had asked me to comment on the cultural taboo of young women wearing saris because, as she said, society tells them that it "makes them look older". "What is your suggestion," she asked, "for those young generations, to break that taboo and embrace the sari…"

Unbeknownst to many, this is a question I field often with friends and customers. The ubiquity of such sentiments in our culture, evidenced by the fact that this question was posed to me at Harvard, of all places, was hard-hitting and triggered an unfortunate series of reactions on my part. Sometimes, when you are that invested in your craft, you become hypersensitive to the negativity surrounding that which you love.

Now I have worked with the sari for 16 years. During this time, I have had countless open dialogues at various forums pan-India with women of all age groups and income brackets about the constant barrage of negativity surrounding it. Yet another question of ageism and the sari at Harvard triggered a lot of pent-up frustration that I have accrued for that segment of our society which constantly expresses disdain for this piece of Indian heritage. It is this frustration that I unfortunately generalised to Indian women in response to the question, when I now see that I should have framed it as a call to stop shaming the sari and whoever chooses to wear it. I am passionate about textiles and our heritage, and I am sorry that in the heat of that moment, I allowed this passion to be misplaced. I take full responsibility for it.

On the topic of the sari, I ask you today how many times have you or someone you know encountered this issue?

Body shaming, attaching connotations of "auntie ji", calling them sloppy; these are all ways in which some men and women alike belittle the sari (and, more specifically, the wearer of the sari). These comments are laced with sarcasm and connotations of cultural repression and backwardness. Many women, young and old, are scared to have an outing in a sari because it is shrouded in so many layers of taboo and controversy, often citing inability to properly drape a sari as an exit point.

We are a celebrity-obsessed country, and yes, it does affect consumption patterns and social behaviour at large. Some consumers are being conditioned to believe that the sari ages women, and you will see the evidence of that clearly documented by so many social media trolls targeting celebrities online. Isn't that shaming, or shall we call it cyber-bullying? Yet we are often complicit in this, which may even be welcomed by some to encourage more traffic to a website/blog. 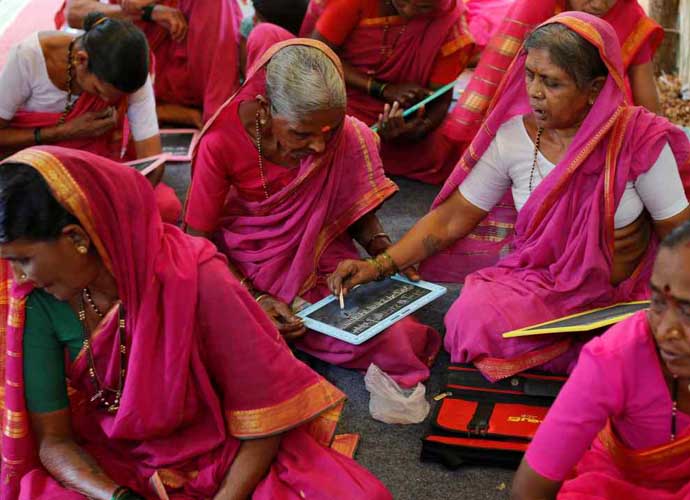 Let's also talk about another subject that has arisen out of the fervent discussions occurring about me and my brand, and one that has always been a big topic on gender inequality and the patriarchy (which, according to some of you, I am ardently supporting): the pay gap. It is humiliating to have to defend yourself in public but sometimes a bitter medicine needs to be swallowed to drive home a hidden truth. I would like to bring to your notice, that the majority of my staff at Sabyasachi Couture comprises women. From pattern makers, to seamstresses, to designers, to publicists, to IT consultants, department heads, store managers, and core of management; women comprise the top earners on my payroll - and it is not because they are women, but because they've earned it by merit. And every Friday, men and women alike at Sabyasachi wear Indian clothing to celebrate our love for textiles, with zero enforcement.

Mine is a women-oriented brand and I owe my complete success to them. I have always, and will continue to love and respect women irrespective of the labels recently assigned to me. It was in this spirit that I started my brand, and that is how it shall remain till the day we decide to shut its doors.

I once again apologise for the distress caused by the words I used, but not for the intent, which often takes a back seat when slammed by controversy. My intent was to call out those women who proudly proclaim that they don't wear saris and simultaneously shame others who wear saris by saying it makes them look older, backward, or culturally repressed.

My social media team takes extreme care that not a single negative comment written by you is censored so that the world can make its own judgments and have a transparent view of the brand. Tomorrow, you can shame me further on Twitter, make provocative headlines out of this letter, or choose to blacklist us as consumers. It is absolutely fair and understandable because it is your prerogative.

For us, for better or for worse, it will be business as usual.

Also read: No, Sabyasachi, if an Indian woman can't tie a sari it's none of your business

#Misogyny, #Indian Women, #Harvard, #Sari
The views and opinions expressed in this article are those of the authors and do not necessarily reflect the official policy or position of DailyO.in or the India Today Group. The writers are solely responsible for any claims arising out of the contents of this article.

Author is a fashion designer.