Twenty-three-year-old Sakshi Mishra’s bold and desperate step to go public about her fears of being harmed by her father, Rajesh Kumar Mishra (alias Pappu Bhartaul), a BJP MLA from Uttar Pradesh (UP), has probably saved her husband and her own life. Even though some people have accused her of being dramatic and actually sympathised with the father, her fears are not unfounded.

On the same day that Sakshi posted her video appeal to her father, the media reported the killing of Haresh Solanki, a 25-year-old Dalit man in Gujarat by his wife Urmila Jhala’s family who belonged to an upper-caste community. On June 20, a couple was killed in Pindwara, Rajasthan, allegedly by the woman’s uncle since he objected to her inter-caste marriage. In September 2018, shockwaves were sent across the nation with the brutal killing of Pranay in front of his wife Amrutha who later publicly stated, “My father ordered my husband’s murder,” allegedly because he was a Dalit. In May 2018, Kevin P Joseph, 23, was killed within three days of his marriage to Neenu Chacko, 21, whose affluent family of Saint Thomas Christian community disapproved of the marriage. Earlier this week, 21-year-old Minakshi Chaurasia was allegedly killed by her father because she married a man, also a Chaurasia, but from the same village, which is considered a taboo. In January 2018, Meenakshi had eloped with her cousin Deepak, both of whom were stabbed by their relatives. Though Meenakshi survived, her family said she should have died too as she smeared the family’s name in the colony.

Sakshi Mishra, daughter of BJP MLA Rajesh Mishra, whose viral video gripped the country, made an emotional appeal to her father.#ITVideoMore videos at https://t.co/NounxnP7mg pic.twitter.com/tfU6nJlYFK

These are just some of the reports of ‘honour killings’ in India which were readily available on a simple web search at the time of writing this piece. Each case is telling of the severe violence and hate that emanates when a woman exercises her choice in marriage or relationship. While some of these cases had grabbed national media attention, some were just reported on a corner of the newspaper and forgotten the next day. But the fact remains that these crimes in the name of honour are rampant in India and not much efforts have been made to tackle the menace.

It wasn’t until 2014 that the National Crime Records Bureau (NCRB) started collecting separate data on the crime. As per the 2014 NCRB report, a total of 28 cases were reported where honour was the motive of the murder. This number saw a shocking 792% jump to 251 cases in the 2015 NCRB report and then fell to 77 cases in the 2016 report. UP topped the list of states with the highest honour killings in the 2016 report with nearly 70% of all the murders in the state caused with honour as the motive.

Evidently, these data are not fully reliable due to the fact that these cases are tabooed and people don’t talk about them openly. A sudden jump in 2015 indicates a pro-active data collection but a sudden fall next year indicates a probable awareness that such crimes would no longer be taken lightly leading to aggressive attempts to hush them up. The NCRB has not published any data after 2016 — in absence of which, fully understanding the nature of these crimes is not possible. 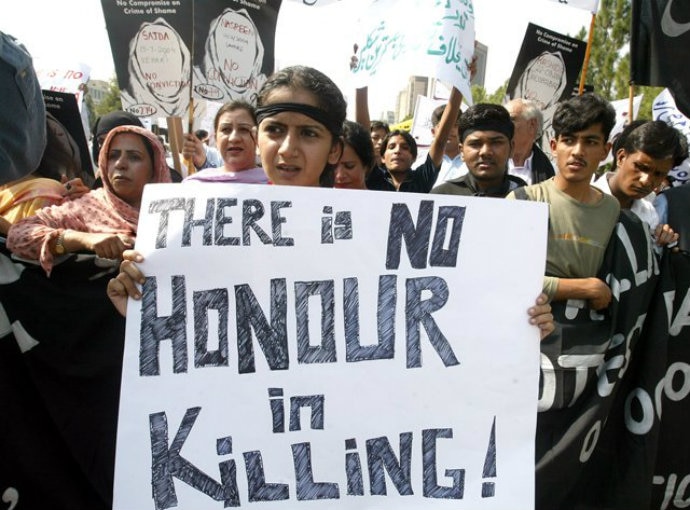 Honour killing is more about the patriarchal concept of 'honour' bestowed upon a woman’s body, than caste difference. (Photo: India Today)

The Supreme Court, in a historic order dated March 27, 2018, has held that the freedom of choice in marriage is an inherent aspect of Article 21 of the Indian Constitution and therefore a fundamental right, and laid down strict guidelines for the state, police and judiciary to prevent cases of ‘honour killings’ and protect women’s right to choose. The apex court directed the respondent states to carry out the preventive measures within six weeks and file a compliance report. Yet, neither did the judgment gain the kind of media attention or awareness it should have nor did all the states follow the order properly.

Just the day before Sakshi Mishra’s video appeal went viral, the Madras High Court took suo moto cognisance of the growing menace of honour killings and asked the state what steps have been taken in pursuance of the Supreme Court order.

Most television debates and op-eds after every gruesome incident of such killings put the focus on how they are a sign of India’s deep-rooted caste bias. While it may be true that most of them are caused where families object to inter-caste relationships of their daughters, but more than caste it is the patriarchal concept of 'honour' bestowed upon a woman’s body and sexuality that causes these killings.

A patriarchal and patrilineal society’s very survival depends upon controlling women’s sexual, matrimonial and reproductive choices because it is through a woman’s womb that identities are produced and reproduced, and controls over properties are maintained. The word ‘patriarchy’ was first used by Friedrich Engels in his work Origin of the Family, Private Property, and the State (1884), in which he propounded that ancient human societies which engaged in hunting and gathering were more or less classless and egalitarian, but the advent of private property such as agricultural land and the desire to own and control them gave way to "the world-historic defeat of the female sex". Studying the ancient Mesopotamian civilisations, Gerda Lerner in her work Creation of Patriarchy (1986), observed that as humans started to learn agriculture, production became the central activity, children were then seen as economic assets and therefore men wanted to acquire and control the reproductive potential of women, and thereby began the process of skewing the power structure.

Since only a woman can ever fully tell the identity of her offspring (until DNA tests were invented), there was only one way for the suspicious and vulnerable man to be sure that the offspring he was nurturing were really his own — that was to physically control the woman’s movement and sexual contacts. From this point onward the sense of man’s 'honour' was artificially bestowed upon the woman’s body.

The same control on women’s reproductive potential is required to maintain racial purity, caste purity, community identities and nationhood. Therefore while honour killing on the face of it looks like an outcome of caste bias, it is actually a backlash against women’s sexual and reproductive choices. It would have helped us in understanding the issue further if we had the NCRB data segregated as per caste and community to find out how many of the relationship that faced violence were inter-caste, how many were inter-religion and how many were within the same caste or community. From my personal tracking of honour killing reports in the media, I have observed that there are many cases — if not equal — where violence took place even when the marriage or the relationship was within the same caste and community — the ‘love marriage’ or ‘elopement’ being the main reason behind the family’s wrath, not the caste.

It is important to examine these crimes from the perspective of patriarchy and women’s equality, and not just caste bias, because they are a severe attack on a woman’s fundamental right. The Supreme Court too in its judgment went at great length to reiterate that the issue is about the individual’s liberty which must prevail upon the class or community honour.

It is often convenient — but disingenuous — to focus solely upon upper caste’s bias against Dalits and let other caste and community escape scrutiny. The real challenge in tackling the problem of honour killing is to question the deeply held patriarchal values camouflaged as parental concerns in every community. Take the case of 22-year-old Anuradha from Yadava caste, for example, who was beaten to death for marrying Laxman, a Padmashali, both caste being in OBC category.

The second wave of feminism propounded that women across the globe, across caste, class, community, race and ethnicity are oppressed by a single factor — patriarchy. For long, Indian feminists have believed we have crossed the second wave — addressed the main problem of patriarchy and are now ready to deal with identity-based power battles like Dalit feminism or Islamic feminism. But I would argue that we are far from having dealt with patriarchy. Looking at the caste angle in honour killing cases takes away the scrutiny from the real factor that oppresses Indian women.

The cardinal rule is that an adult woman is not free to even make a wrong choice, as the Supreme Court stated in Hadiya’s case, “We cannot annul a marriage on the ground that the person she has married is not the right person.” We must, therefore, start with our own homes and accept our daughters' choices, even when it does not seem right. Yes, daughters will probably make the wrong choice, marry a smuggler or a junkie and might even come back crying to her parents, but that is what parents are for — to watch their daughters' backs if they fall. Not control their lives.

Also read: Sakshi Mishra is just one of the many daughters 'owned' by Indian families