Sardar Sarovar dam: Forceful eviction of adivasis and farmers is a blot on our democracy

The government's dream project is a nightmare for 40,000 families.

Prime Minister Narendra Modi is all set to celebrate the completion of the Sardar Sarovar Dam by holding a grand Narmada aarti along with 2,000 priests and chief ministers of 12 BJP-ruled states. Sardar Sarovar, the dream project for modern India, will be a nightmare for 40,000 families — something that will affect the entire ecosystem of the Narmada valley and wipe out the age-old civilisation of the world.

The question we ought to ask: Won’t the forceful eviction of thousands of adivasis, farmers and others from their villages without rehabilitation and resettlement leave a blot on our democracy?

Here are the main issues at stake. Know more about the problem in 10 points:

1. The tragedy: The completion of the Sardar Sarovar Dam on Narmada to 139 metres high will raise the water level by 55 feet, while with the 122-metre-high dam in 2013 itself water had gushed into villages and caused submergence of hundreds of houses.

Can anyone survive when this happens? The dam will affect 244 villages and one township due to its reservoir spread over 40,000 hectare in Madhya Pradesh, Maharashtra and Gujarat as long as up to 214 km. The dam will affect 244 villages and one township due to its reservoir spread over 40,000 hectare in Madhya Pradesh, Maharashtra and Gujarat. (Photo for representational purpose)

Out of the 192 villages and one township falling in Madhya Pradesh, at least 150 villages are in the plains, with highest density of population including various occupational categories such as farmers, labourers, potters, fish workers, boatmen, shopkeepers and various artisans to small-time entrepreneurs. The adivasis on the hilly areas are the communities living on the agricultural land as well as forest and fish. The whole area and village communities that will be affected are scheduled tribe where the provisions of the Panchayats (Extension to Scheduled Areas) Act, 1996 or PESA should be applicable.

2. Entitlements: The resettlement and rehabilitation (R&R) of the Sardar Sarovar-affected families is governed by the provisions of the Narmada Water Dispute Tribunal Award (NWDTA), the policies of the respective states and the two main judgments of the Supreme Court of India (2000 and 2005).

The landholders would get a minimum of two hectares of land, if they are severely affected while the landless, as per the action plan (1993 onwards) submitted before the apex court, would get a source of livelihood with a special fund and through a special agency.

3. Resettlement: The governments of Maharashtra and Gujarat resettled more than 14,000 families with land, while Madhya Pradesh has allotted land to hardly 53 families in its own state.

As per the Tribunal, Gujarat had to give land to 5,500 families from Madhya Pradesh, and 777 families from Maharashtra while the rest of the oustees chose to resettle in their own state.

The Madhya Pradesh government decided to give cash in lieu of land, against the law, that is, Tribunal Award and Supreme Court’s judgments (2000 and 2005) which led to fake registries, scams and derailment of policy depriving thousands of families of their due entitlements in rehabilitation.

4. Corruption: The huge corruption in various aspects of rehabilitation of the displaced in Madhya Pradesh was investigated by the Madhya Pradesh High Court-appointed Justice Jha Commission, which had submitted a 2,000 page report. However, the high court was prevented from opening the report by the apex court and instead asked to hand it over to the government of Madhya Pradesh, which was then asked to initiate action.

However, no appropriate action on the basis of the recommendations has been taken as of yet. The Supreme Court stopped the government from acting against the oustees while the Jha Commission has held the officials of the Narmada Valley Development Authority and the agents (about 400 named) as responsible.

5. Irregularities: As a result, many farmers got caught up in a scam involving fake registries (land-based for farmers, and livelihood-based for the landless, fishermen, labourers, potters). While the resettlement sites are without those two hectares of land and the landless without alternative livelihood, hundreds are yet to get plots for houses and thousands of others not able to build their houses at the resettlement sites which lack even basic amenities due to neglect and massive corruption over the years.

This is obvious from the fact that 40 engineers-officers were sacked due to corruption in construction works at all R&R sites in Madhya Pradesh, after the CAG report and during the case of Narmada Bachao Andolan before the high court, Jabalpur bench. The 2,000-page report by the Justice Jha Commission incorporated a technical report by the MANIT, Bhopal and IIT, Mumbai bringing out the totally unlivable conditions at the R&R sites and corruption involved. No work was carried out since then till the Supreme Court order of February 8, 2017. 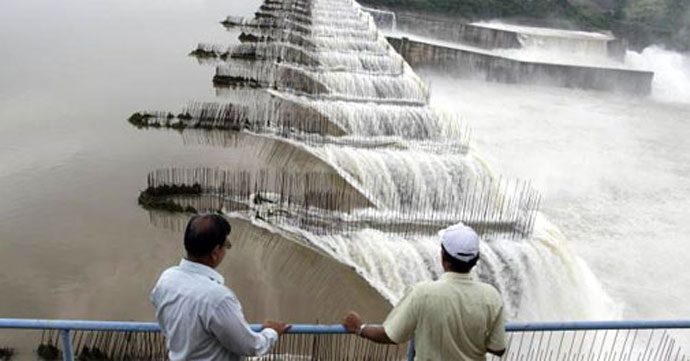 The Sardar Sarovar gates have been closed since June 17, and it’s claimed that this has been done with due diligence and approval by the R&R sub-group and environment sub-group.

6. Maharashtra: In Maharashtra, while hundred of families are yet to get land and house plots, a few hundred others are yet to be declared as project-affected. Some who are supposed to get forest rights and land measurement to work on amenities are still waiting in the R&R sites even as more sites are lack irrigation and basic amenities. The state, however, has hidden all this and reported false compliance. The adivasis in the hills and those at the sites are facing serious problems.

7. Gujarat: The relay fast by the oustees of our state since the July 15, 2016, was withdrawn after one year, prior to the visit of the PM, on assurance from the Gujarat government, but no action has been done on ground yet (on their demand for completing rehabilitation and "no to taking back land after 20 years"). Gujarat is ready and has begun taking back lands allotted to hundreds of adivasis, after 15-20 years.

8. The government’s lie: Sardar Sarovar gates have been closed since June 17, and it’s claimed that this has been done with due diligence and approval by the R&R sub-group and environment sub-group. However, that is based on false claims and fake figures. There are not less than 40,000 families in the submergence area of Madhya Pradesh itself. All of them would get drowned and devastated, along with their farms and houses, schools, shops, brick kilns, enterprises, temples, mosques and all religious places, huge number of cattle and big trees, the green cover for Narmada.

You can well imagine what would be the fate of these lakhs of people and the generations-old communities.

9. Our belief: This is nothing else but political expediency of the Narendra Modi government (at Centre) and the Shivraj Singh government in Madhya Pradesh, all out and ready to benefit the corporate in Gujarat and Madhya Pradesh. This is in violation of legal rights, including Supreme Court judgments since 2000, besides an impingement upon right to life.

This must be immediately challenged and stopped. Don't close the dam gates without comprehensive resettlement and rehabilitation for the project-affected families.

No force should be used against those sacrificing for development, their rights must be respected.

Each of the project-affected families, including the landless, must be rehabilitated as per eligibility and benefits granted by the law, policy and action plans submitted to the apex court.

All resettlement and rehabilitation sites should be ready with civic amenities as per tribunal award and R&R policy.

No impoundment affecting any family before complete rehabilitation should be permitted.

The project, its impacts and feasibility of just rehabilitation must be reviewed to find a reasonable way out.

10. Take action, sign petition: We need more and more volunteers to sign this petition to save the people threatened by submergence.

#Farmers, #Rehabilitation, #Adivasis, #Modi
The views and opinions expressed in this article are those of the authors and do not necessarily reflect the official policy or position of DailyO.in or the India Today Group. The writers are solely responsible for any claims arising out of the contents of this article.