Omission of facts are important when the agenda is to make civil liberties movements look frivolous.

A lot has been written, discussed, and opined on Section 377 of the IPC. But where there are thought-provoking pieces about queerness, heartbreaking personal essays about struggles with homophobia in India, and informative analyses of the nature of laws, there is also noxious diatribe, written, perhaps, with the express purpose of either derailing the conversation — or just to have an “edgy” self-serving opinion.

A column titled “Fighting 377, stupidly: In seeking 15 seconds of fame, gay rights activists have only lost valuable time,” penned by Abhijit Iyer-Mitra, a Senior Fellow at Institute of Peace and Conflict Studies, falls under the latter.

Fallacious claims in this column begin with a question: “Why has the [LGBTQ+] community’s fight for decriminalisation taken so long in a society that can arguably be classified as one of the most open to same-sex relations, historically and in modern times, socially least violently opposed to it in the Third World?”

It’s an intentionally loaded question that leads with the presumption that India, as a nation, has been open to homosexuality and that it has been socially non-violent (or at least, the least violent) towards the idea of same-sex relations. This notion is false. 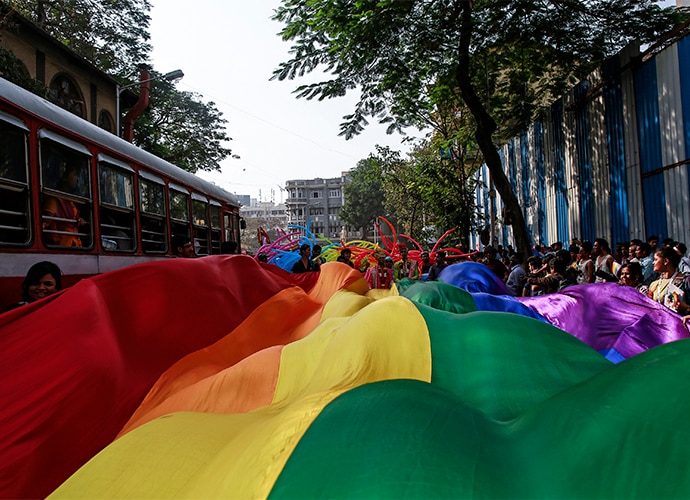 Instances of homosexual folk present in Hindu mythology is no barometer for judging the social acceptance of same-sex couples; after all, any organised religion works “best” when commandments and codes are cherry-picked. But even if we shrug off ancient (and even medieval) histories of the Indian subcontinent, the modern Indian homosexual has mostly been at the receiving end of violence, sometimes verbal, sometimes psychological, and often physical.

One can argue that homophobia, like the dreaded Section 377, is a colonial gift from the puritanical Brits, but even so, it has been a long colonial hangover that India urgently needs respite from. A question that the author, perhaps, forgets to ask is this: If India has been historically socially accepting of same-sex relationships, why then did it choose to not part ways with a law that flies in the face of the supposed Indian spirit of tolerance and acceptance?

While explaining the “anthropological patterns” of how homosexuality gains acceptance in a modern state — first, normalisation, then decriminalisation, then guarantee of equal rights and finally, special protection/affirmative action — Iyer-Mitra makes yet another reference to Indian society supposedly having never witnessed violent homophobia.

The claim is either privileged ignorance — or wilful denial (to empower a narrative, but we’ll get to that later). In either case, it is not true.

A 2015 survey conducted across five Indian states by the Swasti Health Resource Centre for 12 community organisations for men with alternate sexual identities found that of 8,549 respondents, 14 per cent have faced some kind of emotional violence, 8.9 per cent sexual violence and 9 per cent physical violence. 1,762 men who were interviewed in the survey reported facing 2,795 incidents of violence — an average of about 1.6 attacks per person. The report added that most of the violence was perpetrated by clients on male sex workers (39.4 per cent), followed by strangers (24 per cent) and goons (17.5 per cent).

That’s sadly not even the tip of the iceberg.

In 2015, Reuters reported on how India’s terrible laws that criminalise consensual homosexuality have given way to a pattern of abuse and blackmail. The report told the story of a 31-year-old gay marketing professional, who was followed by two men into a public toilet in Mumbai and forced to perform oral sex on them. “They knew I was gay. They were watching me and waiting. They filmed the whole thing and threatened to tell the police. Then they took me to an ATM and made me withdraw all the money I had which was 15,000 rupees ($240)... Even though society has not fully accepted us, the law was there to protect us. But now we are scared.”

The Humsafar Trust, an NGO in Mumbai which promotes LGBTQ+ rights, according to the same report, documented 500 reports of abuse of LGBTQ+ people in the states of Maharashtra, Goa, Rajasthan, Madhya Pradesh and Gujarat in 2014.

In 2017, a lesbian couple — 25-year-old Reena Singh and 22-year old Soniya — from Mathura, Uttar Pradesh, who wanted to marry each other, went missing the day they filed a complaint against their parents. The couple was caught in a "compromising position" and was allegedly thrashed by Reena's father. They claimed they were beaten up for being lesbians, and for indulging in an "unholy union". The police shrugged off the case calling it a “family matter”.

In a 2018 essay, LGBT activist Arif Jafar wrote about how he was arrested and jailed for 47 days in 2001, just because he was a gay man. In his account, Jafar chronicles how cops mercilessly beat him and his colleagues up, humiliated them and tried to break their souls.

Rajesh Yadav, who identifies as a gay cross-dresser, told The New York Times recently that she had been gang-raped four times in less than one year, beaten with a brick and nearly thrown out of a moving vehicle because of her sexuality.

A 2015 Amnesty report has many more examples of how violently members of the LGBTQ+ community are treated.

Yet, Iyer-Mitra writes: “In India, thankfully, despite the fact that we are not an industrialised state, society has never seen violent homophobia.”

If one has to lead their lives in accordance with Hanlon's razor — never attribute to malice that which is adequately explained by stupidity — the motive of such a barefaced lie will never be understood. But it is 2018 and being unaware, especially for men and women of privilege, no matter what their sexual orientation may be, is certainly not an option, least of all, an excuse.

What, then, is the motive?

Iyer-Mitra explains that the problem plaguing the LGBTQ+ community and the movement is the “malaise of intersectionality” — gay rights getting clubbed together with a whole bunch of issues that apparently include how to deal with "Naxals, terrorists in Kashmir and their B-team, the stone-pelters, as well as the urban 'tukde tukde' gang".

Here, the monster is “feigned ignorance”, and the villain under the mask is “fascist apologia”.

If LGBTQ+ rights activists talk about other oppressed minorities, it is because the intersectionality is key in a movement born out of empathy. But extending even latent support towards these groups and questioning a regime that has made oppression and abuse more acceptable (through silence) is an invitation to a get smeared; in this case with straw men such as “Urban Naxals” and “tukde-tukde gang” — because that’s what you are if you lean left, challenge authority or question the Army.

Homophobia, among other forms of social oppression in India, is not the mythical enemy Iyer-Mitra claims it is. It is very real. But omission of facts are important when the agenda is to make civil liberties movements look frivolous.

#Tukde tukde gang, #Lgbtq+, #Homophobia, #Section 377
The views and opinions expressed in this article are those of the authors and do not necessarily reflect the official policy or position of DailyO.in or the India Today Group. The writers are solely responsible for any claims arising out of the contents of this article.