Muhammad Wāris, in his Pādshāhnāma, mentions that as Shāhjahān used to frequently visit Fathpur Sikri for hunting in the environs, he had constructed his daulatkhāna there. During one of my field trips, my assigned purpose was to locate this palace. Because of the way Wāris had mentioned it, my supervisor, noted historian Irfan Habib, was convinced that it was on the ridge overlooking the lake but outside the complex built by Shāhjahān’s grandfather, Akbar. And he advised me to look for it somewhere near the Hathipol sarai. Do analyse the mortar of the Imperial Sarai, he told me; look around it, he stressed.

Upon reaching the site, I realised that there was only one place which tallied with the information given by Wāris. But then at that place was an excavated ruin that professor RC Gaur identified as Minor Haramsara. It is situated on top of the ridge, north of the Jāmi Mosque, east of the Chishti quarters and on the edge of the ridge, as it tapers towards the north. In the middle of the ruins was a water tank or hauz. 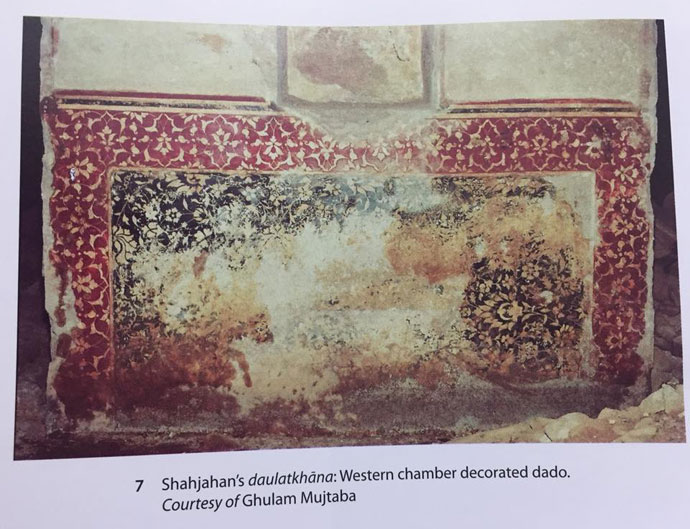 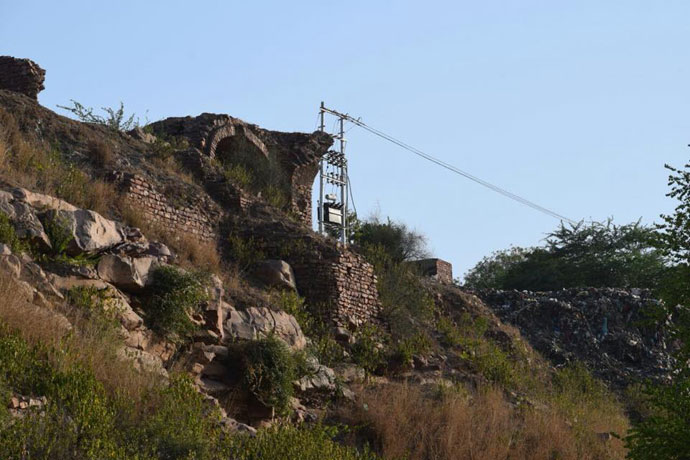 When we tried to approach it, a local shepherd warned us not to go near. “Why?” we enquired. Because a “bhootni” resides below it, we were told. Whenever lambs or sheep stray near it, the evil demoness devours it, and only their carcasses are found afterwards!

Our curiosity took us near the tank and we started looking around. At one point, where the shepherd pointed out, we could see a depressed cavity where he said the animals would disappear. Upon close scrutiny, we could make out that it was something like a window opening below the ground!

I told my team members that we had to enter into this. You go first, they replied. It’s your work, so you take the risk. And as the shepherds who had by now gathered beseeched us to return and not to antagonise the demoness, I lowered myself into the hole, which, by now it was clear, was a ventilator of a subterranean chamber. Alvin Sahib followed me, and soon, one by one, the whole team descended into the hole!

On reaching below, it took us a few seconds to realise that we had descended into a huge hall constructed below the water tank at the ground level! But to our horror, it was full of cobras that were crawling all over the place. The torches in our hands and heavy sticks in our hands were our defence against them. I also realised that it was easy to have descended but it would be an uphill task to climb out. But then, Alvi Sahib had a solution! We would keep on stomping the ground and throwing heavy beams all around to stop the snakes approaching us, as our camera man, Mujtaba Sahib would take the pictures!

The flashlights were revealing beautifully painted walls, dados and ceilings. And the paintings were all in a style common during Shahjahan’s reign! They were all carvo-intaglio. Cream and brick red, as in the mosque and mehmān khāna at Taj!

And then we discovered a second room connected to the first! This, too, was equally beautifully decorated! But then at the far end was something which gave us the jitters! A massive python: the root cause of the legend of the demoness! Beside it lay scattered the bones of animals it had crushed and devoured!

We stayed amid the numerous shiny cobras and the sleeping python for more than three hours, taking measurements of the underground chambers and photographing the wall painting, and then came out alive! We had found and identified the Daulatkhana of Shahjahan and debunked the myth of the demoness!

The Daulatkhana of Shahjahan extends from the ridge above to the ground below. As the ridge falls steeply towards the lake, it ends up at the base in a pleasure pavilion with two large square, domed chambers. In the middle is a large well and a rectangular chamber towards the ridge. The interior of the domes are decorated with beautiful floral designs and patterns, while the walls have carvo intaglio dados and friezes. The soffits of the cupolas and the sides of vaults are adorned with carvo intaglio cartouches and designs. All the internal walls are covered with sparklingly white shell plaster.

So is the case with the pavilions of this palace on top of the ridge, where the internal surfaces are adorned with colourful medallions, friezes and cartouches.

When I was surveying the pleasure pavilion for the first time in 1994-95, we entered a subterranean chamber by opening a passage blocked with large heavy blocks of stones. It was in fact a eureka moment for us when the passage leading to the chamber was cleared!

Since the moment we entered the pavilion by sliding down from the ground level, a large black dog was following us. Oddly, it was neither barking at us nor threatening us, just following us. As it trailed us, Alvi Sahib got nervous and agitated. In fact, he told me we should go back.

When I enquired why, he said he had heard that djinns, at times, take the form of black dogs to guard their territory. Upon hearing this, I had a hearty laugh! Alvi Sahib! Let the djinn come, it would be nice to talk to him, I said, adding that maybe he may grant us a wish or two!

But then when the above mentioned passage had been cleared, and when we entered the damp cold and dark chamber, our hearts skipped a beat. What we saw was a shock that left some of us terror-stricken. In the centre of the room was a prayer mat made of what looked like date palm leaves. On it was kept a rosary and beside it a camphor lamp continued to burn in all its glory!

It was a shock to find this in an underground chamber which we had just apparently opened! My mates fled, trembling. First I tried to reason with them that, probably, there was some other door to this room as well! But the fear was such that even I was not keen to test my rationality or push my luck! We turned back. And as we turned back to leave, the black dog reappeared and stood at the door, watching us keenly! Alvi Sahib muttered a Salam to him and we left!

As we came out, some of us were muttering prayers, while others shivered in fear. One of our team mates, in fact, had fever for the next two to three days!

When I returned to this site decades later, on March 18, 2018, I saw that the place had been enclosed by a stone masonry wall and a group of mullahs had come to occupy the site. A green flag now flutters on the top of this structure. They now claim that this is the abode of a benign djinn, who — if you pray to him to speak to god on your behalf — gets your wishes fulfilled! You just have to make some offerings to the  Mullahji and the djinn will do your bidding!

Upon hearing this, I was reminded of our little experience of decades ago! But I said nothing to them.

When we returned to the Dak Bungalow of Fatehpur Sikri, I lodged an encroachment complaint with the Archaelogical Survey of India (ASI) and appealed to them to have the illegal occupation removed!

(The piece is a version of two Facebook posts by the author.)