The Prime Minister launched the international version of 'Vaishnav Jan' by artists from 124 countries to pay homage to Mahatma Gandhi.

There can’t be a more powerful torchbearer of India’s vision for the world — woven around ancient India’s famous principle of ‘Vasudhaiva Kutumbakam' (the world is one family) — than Narendra Damodardas Modi.

The Prime Minister once again proved it today at the closing ceremony of the four-day Mahatma Gandhi International Sanitation Convention in the presence of ministers and delegates from 67 countries, including United Nation’s Secretary-General Antonio Guterres, when he presented before the world the Mahatma’s vision for clean sanitation along with his favourite bhajan, “Vaishnav Jan To Tene Kahiye Je Peer Parai Jane Re", symbolising the spirit of 'Vasudhaiva Kutumbakam'.

It was a 'stellar performance' that showcased Modi's extraordinary vision, prompting the UN Secretary-General to say that the "the Indian Prime Minister has shown remarkable leadership and vision”.

The high point of the event was the playing of the more than five-minute-long bhajan, sung by artists from 41 countries, a unique experiment that was given shape by Union Minister for Foreign Affairs Sushma Swaraj and India’s foreign ambassadors at the behest of PM Modi. In fact, artistes from as many as 124 countries have sung the bhajan, written by 16th century Gujarati saint-poet Narsinh Mehta. The rest of the artists will be featured in later editions.

As the video of the extraordinary rendition played on the giant screens flanking the dais, there were many in the audience who were left misty-eyed — those who understood the purport of the initiative that has emerged as a symbol of humanity after being popularised by Gandhiji.

The bhajan, which means "only he who loves others is a true Vaishnava", is about embracing diversity and treating every human being as equal.

Modi said the Swachh Bharat Mission has made five lakh villages, 513 districts and 25 states open defecation-free and that the rural sanitation coverage in the country had increased from just over 38 per cent to more than 92 per cent.

Calling it a milestone for "Manav Kalyan (human welfare) he said Swachh Bharat had emerged as a biggest public movement in the world.

Dwelling deeper on the subject, he said until 2014, as much as 60 per cent of the total world population defecating in the open was in India which had now come down to 20 per cent.

Recalling the Mahatma’s words, he said that Gandhiji gave priority to cleanliness over freedom from the British and that was the reason why he could turn it into a mass movement.

Although the government's figures for open defecation-free villages have been contested by some, even the staunchest critics of the PM agree that the success rate of the Swachh Bharat campaign is unprecedented.

This was perhaps in the back of Modi’s mind when he said that due to the government’s strong monitoring efforts it was able to ensure that 90 per cent of the toilets constructed under the mission remain in use and people don’t fall back into defecating in the open. 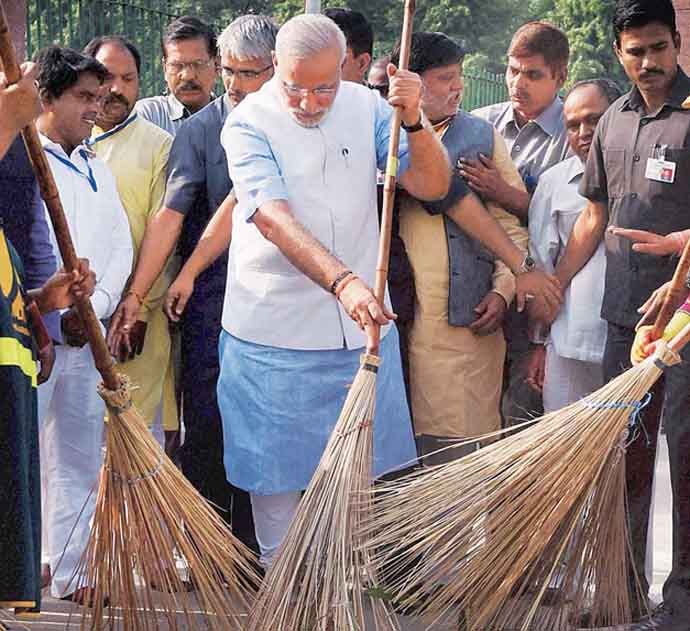 "I don’t think Gandhiji preached cleanliness just for removing dirt and filth," Modi said, adding that the Mahatma's call for cleanliness had much deeper meaning.

“I think when you start tolerating the filth around you, it also starts to affect your mind and the capacity to think. If a man can't stand filthy surroundings, he keeps his faculties open and his mind remains healthy with a clear vision for the future," Modi added.

The UN Secretary-General also disbursed annual Swachh Bharat awards in various categories during the event. The prize for the highest donor for Swachh Bharat went to Mata Amritanandmayi, who donated $14 million out of the total $170 million donated by various individuals and corporates to the Swachh Bharat kitty.

The award for the cleanest district went to Satara in Maharashtra, won by Satara Zila Parishad President Sanjivraje Nimbalkar and CEO Kailash Shinde. Haryana was declared the cleanest state and a proud Chief Minister Manohar Lal Khattar received the award. Three children below 10 years, all from very poor families, also won awards for their little acts of cleanliness. Satyapal Mittal won the award for innovation in Swachh Bharat.

Modi deftly used the platform to carve out a unique image for himself on the world platform where various representatives, including ministers from 67 countries, were present.

The PM showered praises on Sushma Swaraj and her MEA officials and ambassadors posted in various countries for the hard work in bringing together so many artists for the bhajan.

Post your comment
#United Nations, #Modi government, #Mahatma Gandhi, #Swachh Bharat Abhiyan
The views and opinions expressed in this article are those of the authors and do not necessarily reflect the official policy or position of DailyO.in or the India Today Group. The writers are solely responsible for any claims arising out of the contents of this article.