Taimur vs photographers: Why this is a case of confused parenting

Either you work towards upping your privacy wall, or you stop cribbing altogether.

This saga must end — Taimur Ali Khan is just two and a half years old. But we have already clicked, read, seen and scrolled such a huge lot about him.

For long, we have tried to figure out the elephant in the room. What is it that doesn't ring quite right here?

Is this an issue of infringement into the private lives of Bollywood celebrities? Into the life of a little kid? Or is this just social media being the creature it is?

There has been a lot of to and fro; Taimur’s parents and grandparents have expressed their concern over prying eyes on their little bundle of joy, Saif Ali Khan then saying that he doesn't want to put any embargos on photographers, etc., etc.

But finally, it seems, we have found the elephant in the room.

This is a simple case of confused parenting — then blaming the media for doing what they have been doing for ages.

Both Saif Ali Khan and Kareena Kapoor Khan must accept the fact that they are more visible on social media than many of their contemporary parents, though ironically, none of them is actually on social media. They can blame it on their fame, but their gym look, airport look, vacation look, spa look — all their 'looks' are on Instagram.

There are other famous cute toddlers’ parents too, even in their family, like Soha Ali Khan. But we don’t see an overdose of her daughter on social media. Rani Mukherji and Aditya Chopra’s daughter too has a nil-to-limited social media presence. Mahendra Singh Dhoni’s daughter, Ziva, who’s a little older than Taimur, has started becoming a social media star — but we don’t hear her parents complaining about this pressure.

So, you have to choose one side. 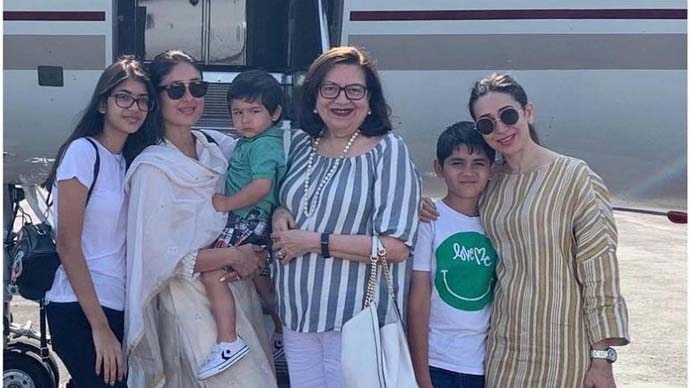 There's no point in blaming photographers when many 'leaked' photos actually come from inside. (Photo: Instagram)

Either you work towards upping your privacy wall — or you stop cribbing altogether.

You ask photographers to not stand in front of your house without thinking of their professional obligations — Bollywood photographers will never be out of jobs if they are barred from taking Taimur’s photos.

You ask your family members, managers and publicists not to share any photos featuring Taimur on social media.

You stop discussing how much a photographer may earn by selling one Taimur photo on national television.

The more you discuss it, the more the subject stays in the digital space. At centrestage.

So, if you scream ‘Don’t blind him, he’s just a kid’ to shutterbugs waiting at the airport, it will also make headlines.

And firmly stop such leakages of private information — where you are travelling, when you're returning, who is with your child, what your kid said or did, etc. — from inside.

It's in your hands to stop your child's pictures go crazy on the internet. But you need to take those steps yourself, parents.

Also Read: Pataudi versus Kapoor: Taimur delivers the verdict and how!