Making War: We must save the children imprisoned in Pakistan's jihadi-run madrassas

Instead of choking their funds, Pakistan's government is helping the expansion of these madrassas, while govt schools remain much fewer. There is a method to this madness.

When I was about four years old, I asked my mother how I was born. She said I came out from her tummy. I asked, "But how did I get in there in the first place?" My mother fumbled at the question. My elder cousin then pulled me aside and told me a fictitious story about how I was actually an orphan and I was discarded in a dustbin after my birth. She narrated that she, in fact, was my great saviour as she had collected me from this terrible position — and handed me over to my mom.

I was shocked at first — but, coming from her, a trusted elder, the story seemed believable.

For many years, in fact, I wholeheartedly believed in this tale and would even narrate the story to all my visiting relatives (to their bemusement). There was not even a speck of doubt in my mind that the story could be untrue. It was total reality for me; I had no reason to doubt it.

That's how a child's mind is — like a clean slate.

And the first deep scratches on such a clean slate can perhaps last a lifetime. 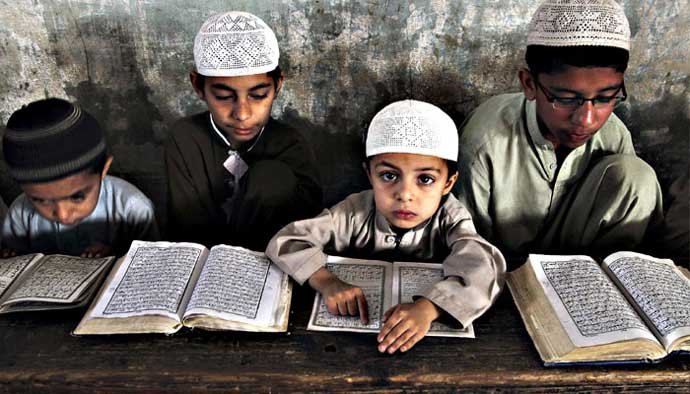 A child's mind is like a clean slate. The first impressions on it last several years. (Photo: AP)

Now, imagine a child of the same age group being told that he is the 'chosen one' who has to actually die one day after killing 'infidels'. That is exactly how jihad starts; that is exactly how the jihadi mindset takes shape. That is the starting point of such terrorism — and it has been proven that it begins in some of the madrassas in Pakistan, especially in rural areas like Khyber-Pakhtunkhwa.

The ever-mushrooming madrassas in Pakistan are the root cause of jihadism in the country. The madrassas have actually become an assembly line of producing terrorists — who are frequently brainwashed from early childhood into believing that they are born to kill infidels.

The reports that emerge about Pakistan's jihad factories are undeniable. Here is one from the Brooklyn Institute of Social Research that raised an alarm way back in 2010. They also released a video, speaking of the grave concerns about the Pakistani educational system which can almost mechanically radicalise a young boy to pick up jihad.

There are some madrassas in Pakistan which don't even put up the pretence of being a religious school and are in fact exclusively dedicated to jihad. One of the most famous, which has produced the world's deadliest terrorists, is reportedly the Darul Uloom Haqqania at the Khyber Pakhtunkhwa Province. Here is the New York Times reporting about the madrassa all of 18 years ago, extensively describing how it became a factory for producing jihadists, like an assembly line production unit. There are several other similar reports.

Yet, we find that in 2018, the Pakistan government sanctioned Pak Rs 277 million to the same madrassa — to expand its operations.

The above is just an example.

There are probably hundreds of research papers across the internet that point out how the madrassas that operate in Pakistan have become breeding grounds for terrorists before they are ready for actual physical training.

The enormity of the problem may be guessed at with the simple statistic that today, there are more than 35 thousand madrassas in Pakistan — up from about 300 during the 1950s.

There are about 3.5 million students studying in these madrassas. Not all the madrassas in Pakistan are teaching the terror doctrine, but I am sure you get my point.

On the other hand, the number of government primary schools in Pakistan is a measly 4,300. 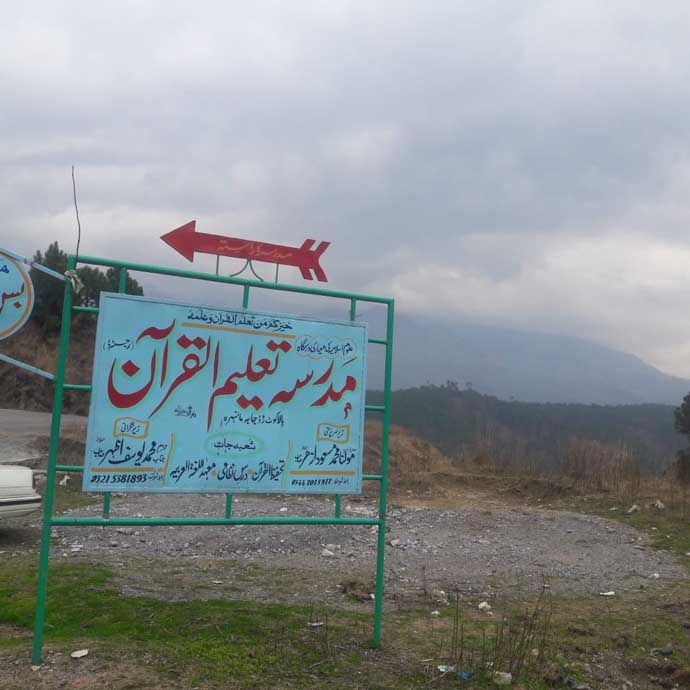 Most terror camps operate behind madrassas, including the one the IAF has destroyed in Balakot. (Photo: Author)

Imagine millions of children being taught a doctrine of hate and being fed every day that they were born to kill infidels. Now, are you surprised that some of them grow up to become suicide bombers or assasins and finally infiltrate India with this purpose?

Most of the terror camps in Pakistan today operate behind such madrassas. All the infamous terrorists today are patrons of a chain of madrassas — be it Masood Azhar's madrassa in Bahawalpur, which is regarded as the terror headquarters of the Jaish-e-Muhammed (JeM), or the madrassa at the terror camp in Balakot which was flattened to the ground by the Indian Air Force recently.

Things have come to such a head though that wherever there is a terror camp in Pakistan, there has to be a madrassa at the exact same campus or just at a stone's throw distance from it. There is undeniable proof in the public domain that students from these madrassas are 'graduating' to terror camps. Imagine the results if you tell a child the same violent story every day. For years. For decades. (Photo: Reuters)

In my opinion, this is where the war against terror should start.

Since India cannot do anything about it, the world community should start pressuring Pakistan to shut its ‘terror madrassas’. Unless Pakistan is forced to crack down on the explosive growth of these terror madrassas, there seems to be no solution at sight to end terror.

We all know that we would achieve nothing by killing terrorists — that's because if one is killed, another swiftly replaces him. These jihad factories ensure that the supply is endless and relentless. Each year, thousands of students graduate as terrorists and suicide bombers, just as Zia-Ul-Haq had envisioned for Pakistan. For the uninformed, it was President Zia who "initially funded Deobandi madrassas with funds from his compulsory zakat collection which began in 1980."

Imagine a little child being told a very violent story. This story is told to the child every day, day after day, year after year, for decades.

We don't need a scientist to prove that any human being will start believing in the story.

After all, I too believed I was first in a dustbin before reaching my mother. But as I grew up, I did also understand where ficiton ended and fact began.

That is a freedom the thousands of little children imprisoned in Pakistan's jihad factories will never know.

Also Read: Why I think banning Kashmir's Jamaat-e-Islami is barking up the wrong tree