He even watched the FIFA world cup in 2007, hosted by Germany as part of a parliamentary delegation, discussing football with Maradona.

One of the last heated arguments Somnath Chatterjee had was with his daugthter. Whether Croatia would win the Football World Cup or would it be France. Always fighting for the underdog, Somnath da chose Croatia. Alongside the ailing leader was his grandson, who had flown down especially from the US to watch the matches with his grandfather.

If there was one sport that brought a glint to the veteran’s eye, it was football.

There was hardly a football world cup that Somnath da missed; going to watch the matches to whichever corner of the world was hosting them. He even watched the FIFA world cup in 2007, hosted by Germany as part of a parliamentary delegation, discussing football with who else, Maradona.

Somnath Chatterjee, who passed away on Monday in Kolkata following multi-organ failure, might have been a veteran Parliamentarian winning 10 Lok Sabha seats, but at heart, he was a sportsperson. Police personnel give a gun salute at the funeral of former Lok Sabha speaker Somnath Chatterjee in Kolkata (Photo: PTI)

Parliament’s proceedings would be smoother if India was winning a cricket match and Somnath da was in the Chair.

During a particular logjam in the Lok Sabha, all eyes were on the Speaker and reporters waiting outside his door were told that Somnath da was in a particularly important meeting.

When that meeting wouldn’t get over even after an hour, the reporters barged in unannounced only to discover Somnath da watching cricket and eating a rasogolla!

A veteran politician and a powerful orator, Somnath da will be best remembered as a man who put principle before party, democracy before self. 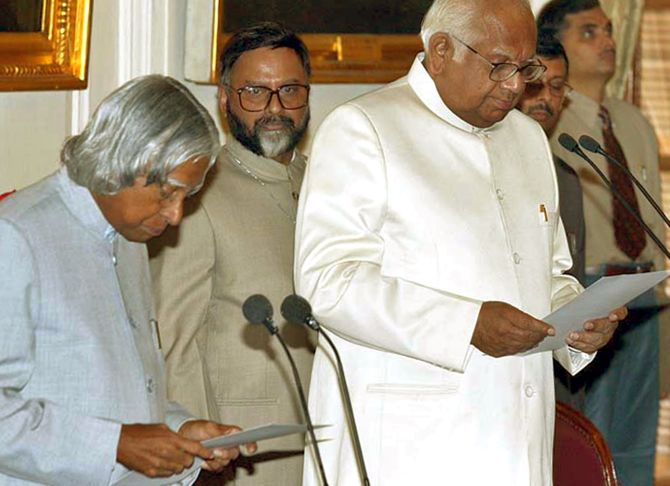 Principle before party, democracy before self: Then President APJ Abdul Kalam administers the oath for the pro-term speaker to Somnath Chatterjee in 2004. (Photo: Reuters)

The “saddest day of his life”, which he couldn’t live down till the end, was his unceremonious expulsion from the party following the defeat of the no-confidence motion over the nuclear deal.

The CPM wanted the Congress out.

They wanted Somnath Chatterjee to resign and vote with the motion to defeat the government. Somnath would have none of it.

The Office of the Speaker was above party politics. CPM general secretary, Prakash Karat, not one to be crossed so easily, invoked the party Constitution’s dreaded Article 19, Clause 13 to summarily expel him from the party.

This was done in haste apparently to pre-empt Somnath da from resigning from the post of Speaker and from the party.

That was a blow that Somnath Chatterjee could not ever come to terms with.

The party that he served so faithfully since 1971, elected uncontested nine times from Bolpur except once.

Defeated in 1984 by a then non-entity called Mamata Banerjee, Somnath da, however, remained a stalwart in Indian politics. 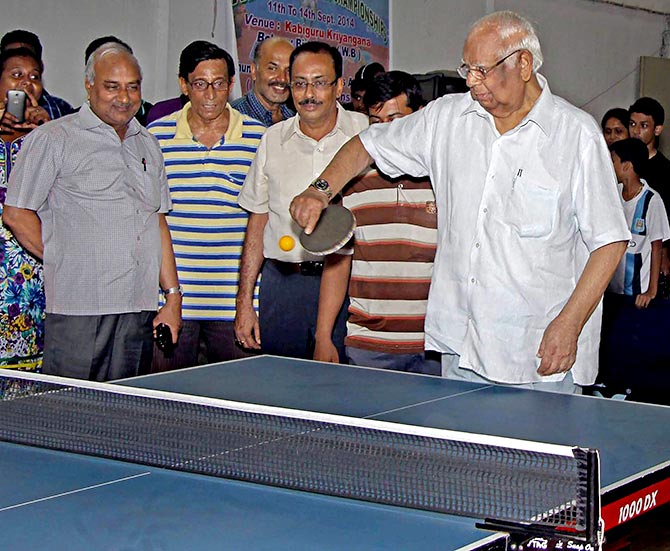 He was a sportsperson at heart (Photo: PTI)

He had no hesitation in calling out the CPM’s historic blunders in turning down the post of Prime Minister. Nor did he mince words in questioning the party leadership’s preference for backseat driving. The party might be now a decimated self of the powerful Left Front that ruled Bengal unquestioned for over three decades, but Somnath da chose to keep his counsel to himself, never criticising his party even after his expulsion.

Ahead of the last Assembly elections, Somnath Chatterjee turned down an offer to be brought back into the party fold, pointing out that he should never have been expelled in the first place.

Upfront, large-hearted, with an acceptability across party lines, Somnath da loved his scotch and his hilsa. And the minority government of VP Singh, supported by the Left and the BJP, knew that. Singh would make sure that there was hilsa for Somnath and vegetarian food for LK Advani at the dinner table. Somnath would jokingly tell Singh, “You have managed to get the support of both vegetarians and non vegetarians.”

His father was NC Chatterjee, eminent lawyer and president of the All India Hindu Mahasabha. But after his father’s death, he contested from Bolpur in 1971 as an independent with outside support from the CPM. Somnath da chose to move away from the ideological moorings of his family for the Left.

As in life, so in death. Somnath da was generous to a fault. He chose to donate his body for research, defying the dogmas of religion and society.

Also read: How I learnt parliamentary politics from Somnath Chatterjee

#CPM, #Lok sabha speaker, #Football, #Somnath chatterjee
The views and opinions expressed in this article are those of the authors and do not necessarily reflect the official policy or position of DailyO.in or the India Today Group. The writers are solely responsible for any claims arising out of the contents of this article.