When the RSS met the tribal

A section of the population was also stopped from turning into Naxal sympathisers.

From Gujarat to the Northeast — most recent elections have indicated a trend of tribal votes shifting towards the BJP in a very impressive way. The shift has proved decisive for the BJP’s electoral victories.

Media reports, researchers and political observers are of the view that this shift is due to the relentless work the RSS has been doing in tribal areas of the country. Even analysts, who are never ready to give any credit to the RSS for the BJP’s electoral gains, are beginning to recognise the RSS’ contribution in this area. The tribal zones of India have remained under the influence of either the Christian missionaries, or the Naxalites. Source: Reuters

For long, the tribal zones of India have remained under the influence of either Christian missionaries or Naxalites.

The RSS entered these zones silently. It formed NGOs to work among the tribals, to drive them towards the Sangh, and to empower them as 'respectable citizens'.

On the one hand, the Sangh attracted the tribals through “seva”; on the other hand, it tried to cultivate a 'Hindu identity' among the tribal population.

Apart from the political significance of the move, it created a counter to the Christian missionary activities in these areas. A section of the population was also stopped from turning into Naxal sympathisers. 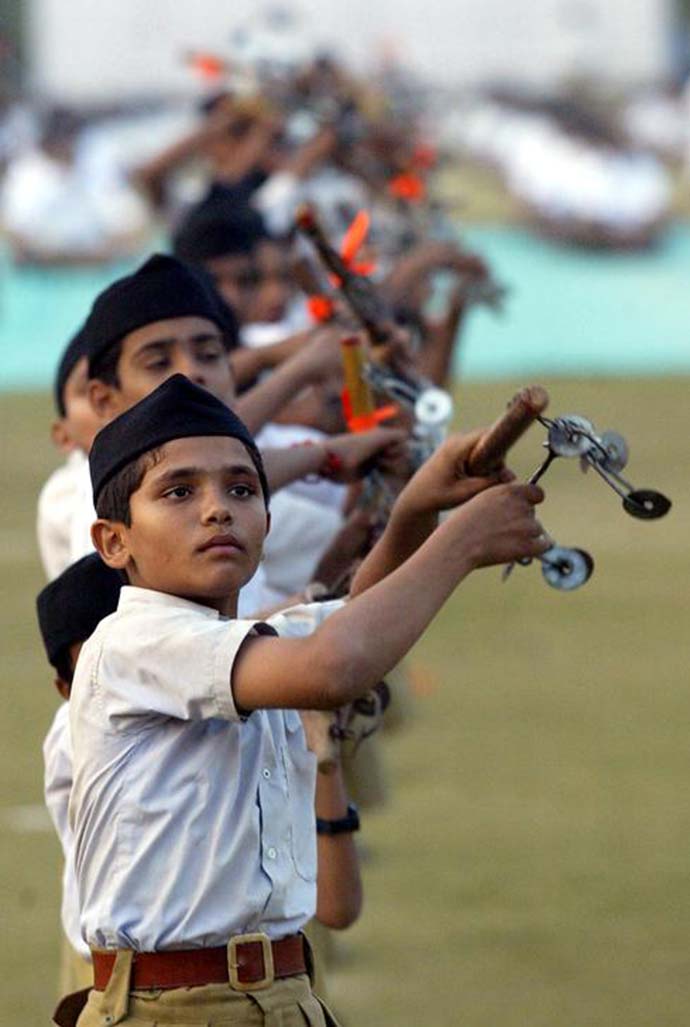 A Sangh pracharak said the organisation maintains a relationship with its students even after they graduate. Source: Reuters

The RSS has set up free schools with hostel facilities in remote areas where state facilities have not yet reached. Similarly, they came up with many aarogyashalas (hospitals of ayurveda, homeopathy and modern medicine) there. In an attempt to support the indigenous knowledge of the tribal communities, the RSS institutes started imparting national-level training on archery, wrestling and other traditional tribal sports.

RSS training completely transforms these tribal children - later, they become role models for their communities, a Sangh pracharak working among the tribals in Sonabhadra area of Uttar Pradesh said. “These boys also learn bhajan kirtan and moral education from our schools. After passing from our schools, they go to cities and we support their higher education too. We maintain our constant relationship with them,” he said. Not just an average march-past. The RSS supports the traditional sports and learning of the tribals too. Source: Reuters

The Sangh believes in the traditional ways of tribal living. There is an acute water crisis in many tribal areas. The Vanvasi Kalyan Ashram in Sonbhadra has thuus taken up a project to revive traditional sources of water to address the shortage of the crucial resource.

An activist explained how they are also concentrating on reviving tribal businesses. Students from nearby technical schools or business schools are often invited to exchange ideas to develop avenues for tribal livelihood, conforming to their tradition and culture.

Setting up Hanuman temples or statues of Hindu gods and goddesses is also part of the RSS’ outreach project.

At some places, many other Hindu organisations are also chipping in to reconstruct tribal culture. Tribal deities are placed inside Hindu temples as well, forging a Hindu-tribal synergy. “Both societies have the same values and moral structures. We are working to explore such links, which may create unity in the society,” a religious interpreter said.

With RSS' deep reach in the tribal areas, it's high time BJP leaders started using the organisation's influence for its outreach programme. For the BJP, this would be a win-win.