The Supreme Court will continue to hear the constitutional validity of the test for survivors.

Despite the fact that two-finger tests have been either abolished (in some parts of the country) or made inadmissible in rape trials as part of courtroom proceedings, these tests continue to be used.

The two-finger test examines virginity, provides an account on whether the rape survivor in question was habituated to sex or not and this then serves as determination for consent.

Today, August 1, the Supreme Court will continue the hearing on the validity of these tests and conclude as to whether it will be allowed and admissible in court, and if so under what circumstances.

In its report of January 2012, the Planning Commission’s Working Group headed by the secretary of the Women and Child Development Ministry issued a recommendation for the abolition of the test so as to protect victims of sexual violence from any further emotional distress.

Following a public interest litigation filed by Dr Ranjana Pardhi in the Nagpur bench of the Bombay High Court, the state government appointed an eight-member panel and subsequently the GR was issued. The PIL sought to streamline the medico-legal response in cases of sexual violence. 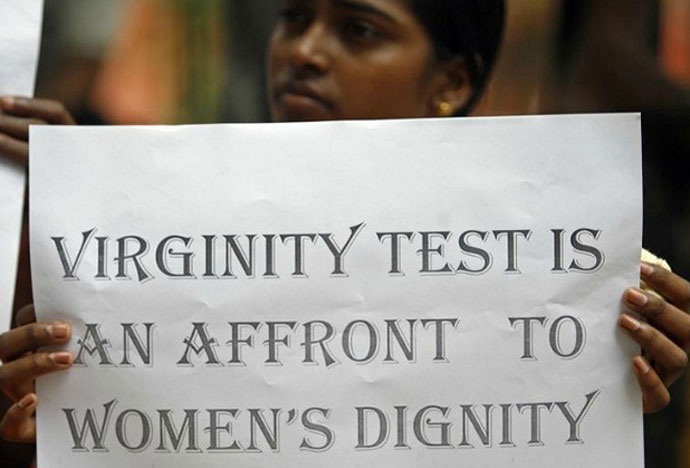 The Lillu Rajesh versus State of Haryana was a criminal appeal admitted in the Supreme Court that, amongst other things, brought about the seeming end of the two-finger test.

For the rape of a 13-and-a-half-year-old girl, the Punjab and Haryana High Court convicted the offender under Section 376 (section on rape) of the Indian Penal Code; he was awarded a seven-year rigorous prison sentence. An appeal was admitted by the Supreme Court on the grounds that the prosecution had failed to prove the date of birth of the victim.

The appellants maintained that the victim was over 18 years old and that she had consented to sexual intercourse. On the issue of age, it was noted that the trial court had examined the school certificate of the victim and the defence could not adequately disprove its authenticity. This certificate had established that the victim was less then fourteen years of age at the time of the rape. On the issue of consent, the court relied on the medical evidence provided by the examining doctor, a medical officer from a civil hospital in Jind. The medical officer had conducted an examination including the two-finger test. Following the investigation, the following statements were made in the report:

“Vagina admitted two fingers cervix was normal. It is correct that I have given my opinion that hymen was completely torn. I cannot say whether it was torn one year back, two years back or 10 days back. I cannot say from how many days the prosecutrix was having sexual activities. The possibility of the prosecutrix  habitual sexual intercourse cannot be ruled out.”

The Supreme Court then considered other precedents, specific judgments by state high courts of Uttar Pradesh and Karnataka. The court had noted that, “Even if the victim had lost her virginity earlier, it can certainly not give a licence to any person to rape her.”

For years, feminist scholarship and activism has been trying to make this precise point. For years, activists have continuously challenged the legal eco-system often exposing patriarchal biases that exist in these institutionalised spaces.

The Supreme Court bench of Justices BS Chauhan and Fakkir Mohamed Kalifulla then dismissed the case and denounced the two-finger test stating that "…undoubtedly, the two- finger test and its interpretation violates the right of rape survivors to privacy, physical and mental integrity and dignity. Thus, this test, even if the report is affirmative, cannot ipso facto, be given rise to presumption of consent".

Activists have argued against not only the unscientific basis of the tests themselves, but also its constitutional validity and the serious mental grievance it causes rape survivors who traverse the arduous paths of justice. Feminist legal theorists like Ratna Kapur have argued about the various social constructions of culture and tradition that finds its way into framing of laws and the legal procedures. In the case of State of Uttar Pradesh versus Munshi (2009) the court noted that: “Even a woman of easy virtue has a right to refuse to submit herself to sexual intercourse to anyone and everyone.”

The terminology “easy virtue” points out the extent to which patriarchal biases exist in the language of the law. While the rapist is referred to as offender, defendant or appellant, the victim is painted as a woman whose moral character is always suspect, a promiscuous person of easy virtue.

It is therefore necessary to remain not only fearful and horrified (that the Supreme Court will now continue the hearing on the two finger-tests) but also vigilant and ready to challenge the legal ecosystem once again.

It is indeed a black day for feminism that a deeply intrusive and gravely unjust process like the two-finger test still has takers who continue to seek legitimacy in legal systems simply on the basis of the cultural constructions of chastity and the virtue of women who have been violated in the worst way possible.

Also read: Why is virginity a reason to humiliate a woman after rape?

#Supreme Court, #Anti-rape law, #Rape, #Two-finger test
The views and opinions expressed in this article are those of the authors and do not necessarily reflect the official policy or position of DailyO.in or the India Today Group. The writers are solely responsible for any claims arising out of the contents of this article.