Is the PMO trying to usher back Aurangzeb's era for the IAS?

An inter-departmental communication that emanated from the office of the joint secretary (administration) in the Ministry of Personnel, Public Grievances and Pensions, has created ripples among civil services aspirants. The letter, dated May 17, 2018, a copy of which is in the public domain, states that the Prime Minister’s Office (PMO) desires to "examine if service allocation/cadre allocation to probationers selected on the basis of the civil services examinations be made after the foundation course" based on the "combined score obtained in the civil services examination and the foundation course". 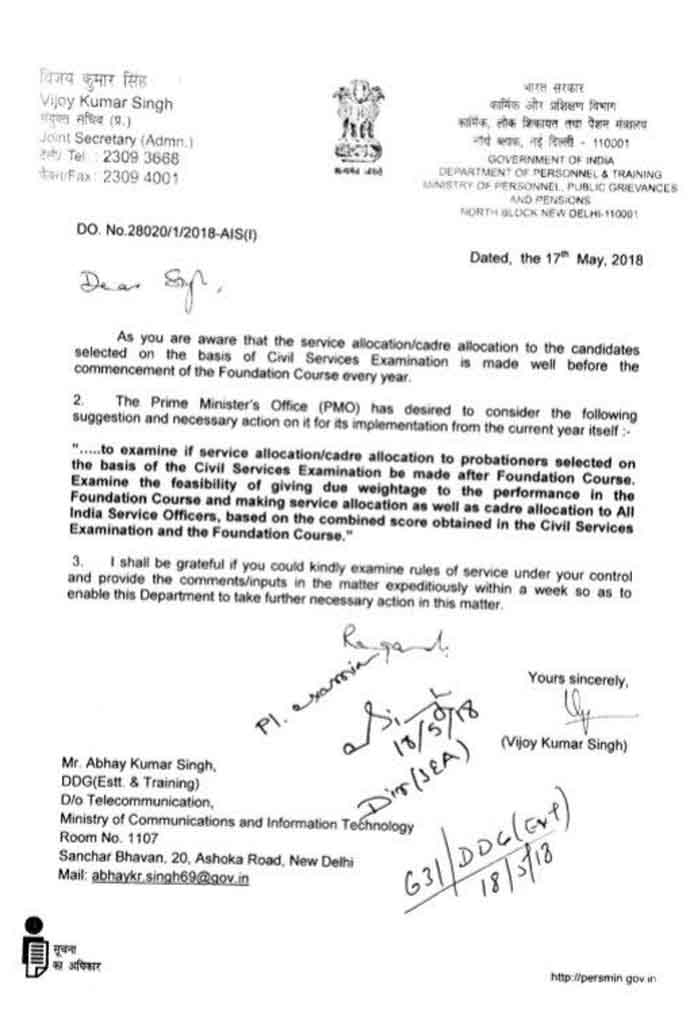 Screengrab of the letter (via author).

The proposition desired by the PMO is dangerous and regressive.

Many have argued that under the proposed set-up, merit would be replaced by sycophancy. This poses a direct threat to the role of the Union Public Service Commission (UPSC), which, under Article 320 of the Indian Constitution, must “be consulted on all matters relating to methods of recruitment to civil services and for civil posts” and “on the principles to be followed in making appointments to civil services and posts and in making promotions”.

During the debate in the Constituent Assembly in August 1949, Muniswami Pillai, representing Madras, raised the issue of what the UPSC must guard against: “Due to communal distinctions in this country, some of these communities, though they may be intelligent and competent to hold any post, have not been given their due chance.” When he further pointed out that “the number of Scheduled Caste people that are occupying posts both in the Centre and in the provinces is very negligible”, there was very little said and on that note, the provisions relating to the UPSC were voted into the Constitution. The Constitutional provisions for reservations for Scheduled Castes and Scheduled Tribes along with an independent UPSC were seen as adequate safeguards to the challenges prophesied by Muniswami Pillai. Back to Aurangzeb's era? The ill-thought-out attempt to introduce subjective assessments is regressive.

In 1951, the Report on Public Administration submitted by AD Gorwala explicitly mentions that recruitment to all grades of government services should be conducted in a manner which eliminates scope for patronage - while describing 'patronage' in the report, he expands the definition of 'patronage' to encompass communalism, sectarianism, nepotism and favouritism.

But it was not until the implementation of the Mandal Commission in 1990 when the civil services were made inclusive and representative, and the unspoken system of patronage was tackled.

At a time when the diversity of the candidates entering the services, along linguistic lines, gender-wise and caste-wise representation is in question, such ill-thought-out attempts of introducing subjective assessments are regressive. This will only serve to reduce the transparency of the recruitment process by allowing an administrative body — the Lal Bahadur Shastri National Academy of Administration (LBSNAA) — under the direct control of the government to play a crucial role in service allocations.

The LBSNAA will run the risk of becoming a breeding ground for “yes-men” and sycophants of the government of the time. Moreover, the LBSNAA is not a constitutional body like the UPSC. This, in turn, has evoked fears that it will not be immune to partisanship or political influence. This scenario has given rise to concerns among civil services aspirants and concerned citizens, about a bias along caste and class lines, along with patronage networks and sycophancy influencing the final service allocations.

If the PMO goes ahead with the plan set out in the inter-departmental circular, it will certainly be reminiscent of an earlier ruler who also hailed from Gujarat: Aurangzeb.

In his book, Emperors of the Peacock Throne, Abraham Eraly quotes the Italian traveller Niccolao Manucci, who spoke about the Mughal emperor’s court being filled with young men who were timid sycophants. This, Manucci claims, “led to lack of earnestness in thought and action, corrupted values and perverted both individual character and social process".

Modi and his government must guard against any move that will bring back sycophancy, patronage and influence as the key factors in administering public service in India.

Also read: Denied entry to UPSC exam centre, Varun Chandran killed himself. Who should we blame?