Contempt and compassion: Every village suffers it

The meaning of humanity, or the lack of it, is discovered by living in a village.

The year is 1990. I am 26. From my father, I have just about got the hang of farming. It is end-December and we are back shivering from the field. The village cold goes an inch deeper into the bone than winter in the city. I must drive back to town, where I live, after blood thaws in my hands and feet. Three of the farmhands and I sit around a fire, on broken bricks. The fog and smoke waltz together.

There is a peculiar smell in the air, all of us murmur. Nissar says that it is rubber, and the other two nod their heads. Nobody owns up to throwing something, a plastic bottle perhaps, in the fire. The smell gets stronger and we rake the embers and find nothing. What’s that smell? The best suggestion yet is that a lizard had crept close and got buried under the burning crumbling wood. 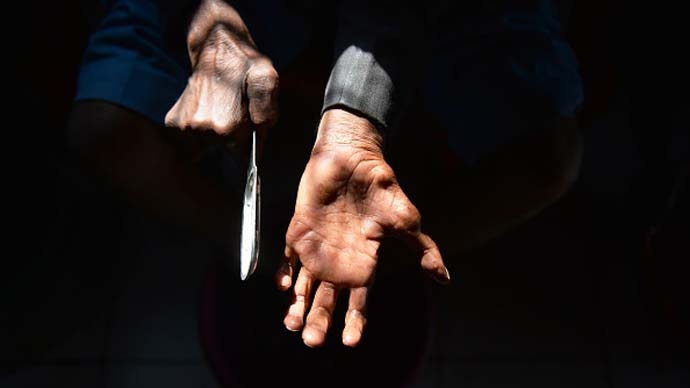 “The man has leprosy,” the doctor says. “Start the medicine but don’t tell him.” (Representative photo: AFP)

It is the next morning, and Nissar doesn’t report to work. I am back after assigning duties to find him sitting on his low-slung cot in front of his hut. His children play around in the dust at his feet unmindful of the chill. His arms are painted black, I notice, with discarded engine oil, believed to be an antiseptic. The village folk pour it into deep gashes and claim it works better than doctors and stitches.

Nissar holds up his arms under my enquiring eye. I am shocked. The entire length from his shoulders to the wrists is adorned in pus-filled balloons up to four inches wide. I have seen nothing like it. Does it pain? He shakes his head, smiling. I rush him anyway to town to my brother, a dermatologist, whose answer unnerves me.

The skin on Nissar’s arms feels no sensation. The smell around the fire was him burning alive. “The man has leprosy,” the doctor says. “Start the medicine but don’t tell him.” I ask why, and he calls me stupid. If the village gets to know what disease he has, they will chase him out. More serious than that, the patient will blame it on his sins and may want to kill himself. Village logic, like discarded engine oil, cannot be questioned yet.

Months go by, spring arrives. Then spring ends and the harvest season begins. Nissar is back to work and takes his pills regularly, I ensure. Nobody but my brother and I know why he must take medicine without fail. I admit, I’m scared of infection and try not to show it. His wounds have healed fine.

We are loading bags of wheat onto an awaiting trolley. The combine harvester circles the plot eating up the golden crop like a monster. It’s a beautiful April afternoon. I sit on the tractor with my feet up. Nissar is on the trolley arranging the bags. A boy of 23 with a slight deformity in his left foot carries 100 kilos on his back up a ramp and slips. The bag hits the ground and bursts open, spilling gold. We rush to help. Nissar throws up his arms.

“What deformed eunuchs we’ve employed!” he screams at the heavens. I look at him, I want to cry. Leprosy is of the mind, yeah, and kindness too lives thereabout. I will never fully understand the meaning of humanity. Village life can be a lot colder than cities. I was tempted to tell Nissar the truth about him, something held my tongue.

Also Read: How to bring an end to disabilities among children with leprosy