With love from Chennai: Why eight years' wait for Rajinikanth's 2.0 was worth it

Shankar and Rajini have balanced each other out in the film.

Loud music, dance, bursting of crackers — the atmosphere around Chennai’s Rohini theatre seemed like that of Diwali, or Pongal.

It was no different as the celebration was to mark the release of Rajini’s newest flick 2.0, in all its grandeur.  The 4 am show, which is generally the first show of a Rajini film in Chennai, had a houseful of audience and the success rate continued for all the other shows during the day.

The 543-crore film was criticised for the initial delay in the release. Low-key promotions cast a shadow of doubt on its box-office performance. The makers have proved all these skeptics wrong by winning the hearts of the masses with a sci-fi, a supernatural thriller starring two superstars of the Indian cinema — Rajinikanth and Akshay Kumar. 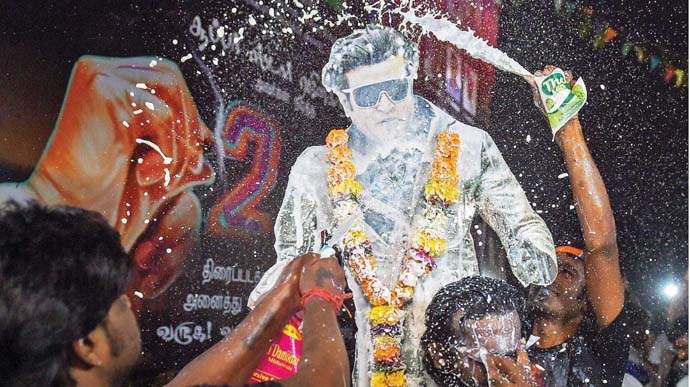 Something like Diwali or Pongal — every Rajini movie is a reason to cheer for. (Photo: PTI)

From the word ‘go’, the film hooked the audiences to their seat, though the first-half took time to establish the concept, with many technical terms thrown at the audience every now and then. The obsession of the current generation with mobile phones was well-depicted. The scenes where Rajini and Akshay Kumar shared screen in the second-half made 2.0 a memorable journey.

Rajini’s entry in all his four avatars got grand reception from the audience with screams and cheers drowning out the voice of the following dialogues. It needs to be noted that age is catching up with the superstar and this was evident in some sequences, but Rajini proved his mettle through his avatar chitti 2.0 and 3.0. “Thalaivar was beyond expectations. Four avatars and each of them portrayed with brilliance. Shankar has once again proved he is the best,” said Karthik, a fan after the show.  Akshay Kumar’s characterisation of Pakshiraj invokes love, sadness, fear and anger towards the character.

“Many are talking about Rajini only, but Akshay Kumar’s intro and his flashback was so well depicted. He has been improving as an actor with every film,” said Santosh, who watched the film on the opening day.

Amy Jackson, too, needs a special mention for bringing in slight humour and a love angle in the film. Yes, robots do have emotions; they do fall in love and even give their hearts (Memory Power Units) to save their lovers!

As far as the other characters are concerned, Kalabhavan Shajohn seems to have been a new pick by Shankar for Kalabhavan Mani, a person who essayed many roles in Shankar films, including Enthiran in 2010. The biggest superstars in the same frame. (Photo: Twitter)

“Eight years of wait, and the sequel seems acceptable. The makers took three years of time and the perfection reflects that. The movie is like a Hollywood film as far as its VFX is concerned,” said Abdul, who watched two shows of the film on the first day itself.

The visual effects, part of over 90 per cent of the film, have been brilliantly executed. Though the BGM was not as captivating as one would have liked, the music by AR Rahman has won the heart of the masses. The makers could have used better clothing for the robots — the designs were a little disappointing.

Shankar has brought in a lot of elements from the first part — Enthiran, and the grand entry of chitti 2.0 makes you love this villain of the first part and make you fall in love with his mannerisms and his creation the 3.0. 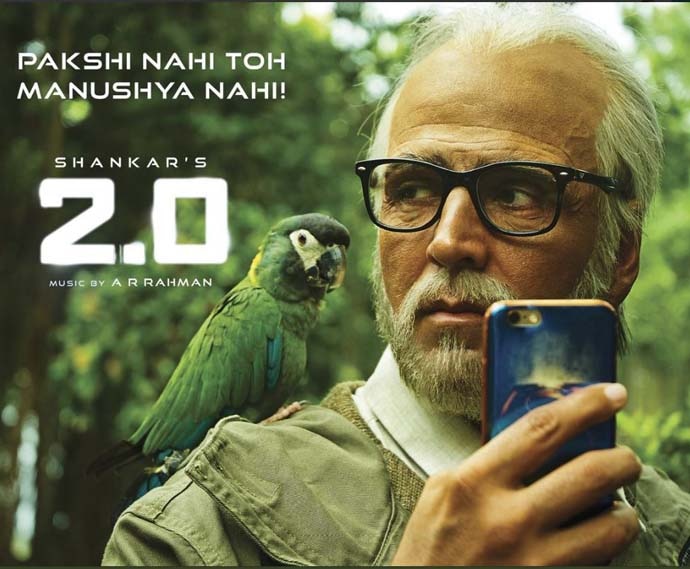 We can't stop talking about Rajini. But Akshay was splendid. (Photo: Twitter)

There aren’t many punch dialogues, which is what is generally expected in a Rajini film. But then Shankar and Rajini have balanced each other out in the film.  Will sci-fi and supernatural go together? You must have thought this over and the answer was ‘no’.

But Shankar makes you think again.

As usual, this film too has a strong message that the present and future generation will have to give serious thought about.

2.0 has received a grand opening, and has been declared a blockbuster by fans but now these Rajini fans are demanding the superstar’s next, which they hope will be his grand entry into politics.

Rajini undoubtedly has the power to shift the political discourse of Tamil Nadu.

Also Read: Rajinikanth’s 2.0: Will it make or mar his political future?