STEM is in dire need for more girl-power. It's time to see and remove the barriers

Despite the huge potential, why are such few women choosing a career path in science, technology, engineering and mathematics?

“Alexa, what is the capital of Australia?”

“Alexa, is it likely to rain tomorrow?

“Alexa, how is the Sensex fairing today?”

It is unlikely that the Indian urban population has not heard of ‘Alexa’. The digital assistants Echo and Dot from Amazon hit the Indian and global markets last year, and since then have been lauded for their performance, design and specifications.

Developed by a team of skilful and adept scientists, these voice-controlled devices required a host of inventions and hardware development. After years of reiteration when Echo finally launched, it increased Amazon’s sales by 39 per cent alone in a year. This technology marvel was built and led from concept to product with a small team of robotic scientists.

Kavitha Velusamy was a core member whose research and work served as guiding principles for developing Echo.

The real question, thus, is for us and not Alexa — did you imagine the robotic scientist behind Echo being a ‘her’?

It is not surprising if the answer to that question is a resounding NO. Women and girls in India, or even around the world, are hardly encouraged to pursue careers and professions in Science, Technology, Engineering, and Mathematics (STEM).

According to a UNESCO study conducted in 2018, the world average for women in STEM stands at 28.8 per cent — wherein only 13.9 per cent women in India are employed in the field. The number which is disappointingly low finds its roots in the wide digital gender divide that exists within the country — which is worse than that in Iran and Saudi Arabia. 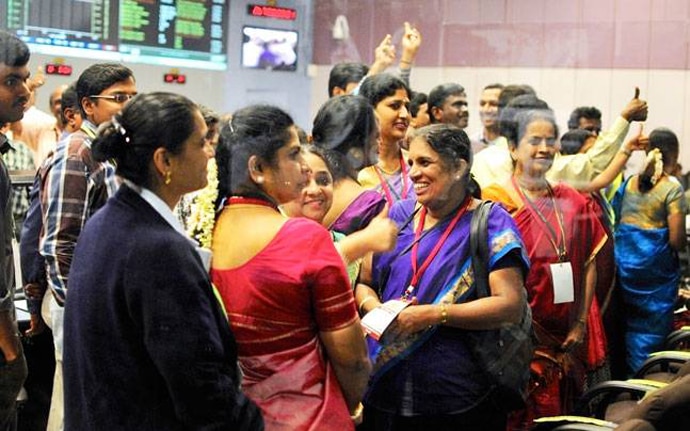 A rare moment: Female scientists at ISRO congratulate each other when India put a satellite in Mars' orbit on September 24, 2014. (Photo: Reuters)

As substantiated by a recent Organisation for Economic Co-operation and Development (OECD) report, the lack of women and girls pursuing as well as studying STEM subject has led to a digital gender divide among inventors and software developers in the developed economies.

What is puzzling is the fact that STEM is a lucrative and reputed career option — yet, women and girls do not pursue it. It is important to understand the rationale behind such low-uptake.

Several studies and research including those by the American Association of University Women point to the thriving gender stereotypes and the absence of role models as reasons for women’s low participation in the field. These biases — not new — are propagated and reinforced since childhood, leading young girls and women alike to believe their male counterparts have a ‘natural flair’ for technical fields.

Even though girls outperform boys consistently in these subjects, these stereotypes bring down their own self-efficacy or diminish confidence in their own abilities to succeed in the domain, as corroborated by a Stanford University study. Moreover, people are likely to pursue those professions where they have a greater number of people from their own gender — hence the lack of role models further compounds the problem.

Rising above these intangible barriers is often an uphill task, requiring deep introspection and perception change not only in our surroundings but within ourselves. It takes stories of those who have fought insurmountable barriers to imagine different possibilities and a better future for oneself. Introspective questions and statements such as, “What if this barrier can indeed be transcended” or “If she can do it, so can I” help girls dream big for themselves and realise their full potential.

In my own experience, I have witnessed how catalytically stories inspire change, building agency among even the most reticent. Can we see the barriers? There are powerful reasons why we do not see many women in STEM. (Representational image: Reuters)

Girl Rising — a global campaign for girls’ education — launched its flagship initiative as a gender sensitization curriculum, which sought to encourage adolescents to reflect on dominant social practices, corroborates the efficacy of the model. Students who underwent this curriculum were not only more confident in pursuing their dreams but were also able to successfully identify traditionally accepted gender stereotypes and biases. With gender norms being solidified during adolescence, it is imperative that adolescents are equipped to find their voice and encouraged unequivocally to pursue dreams and aspirations of their choosing.

Fortunately, a gender-equitable STEM industry may very well be on the horizon. An OECD report remarks that with over 2,60,000 female tertiary ICT graduates, India is the second country in the world closest to achieving gender parity in STEM. India is also amongst the few countries where innovations by women received the highest patents between 2010 and 2015.

These achievements, highly encouraging, need to be sustained and continued.

As we saw recently, the 2019 International Women’s Day theme — #BalanceforBetter — calls attention to creating a world driven by balance and equal participation. Catching them young is key to changing the narrative — encouraging them to dream big for themselves expands their world of possibilities.

We need more Kavitha Velusamys, not just in India but across the globe.

After all, like Melinda Gates says, ‘The next Bill Gates will not look like the last one’.

#Engineer women, #Women in technology, #Women in mathematics, #Women scientists
The views and opinions expressed in this article are those of the authors and do not necessarily reflect the official policy or position of DailyO.in or the India Today Group. The writers are solely responsible for any claims arising out of the contents of this article.