Women need to ask themselves who they were ten years ago, not how they looked

"Shree, put up a picture of yourself from the time you first got on Facebook, please," an odd request suddenly popped up in my Facebook messenger sometime this morning.

My phone was on silent until then. The way it usually is, every morning, unfailingly, when I work out — two hundred and fifty sit-ups, one hundred push-ups, squats, lunges, weights, planks, kettlebell, incline decline bench — you name it.

"I didn’t get you," I typed, heaving, my chest going up and down, as I stretched myself out, my back still smarting.

There was a minute or so of silence.

I scrolled down my timeline meanwhile, imminently alive with pictures of women I knew — under the hashtag #tenyearchallenge.

The same was now demanded of me.

Some posts came along with emotional outpourings. Some longer than others. Others, and to those I could more veritably relate to, mourned the loss of three things I now think also define my 40s — I am 41 by the way — hair, skin and memory.

What was being celebrated was how 'young' we looked, back then, but naturally. Soppy fashion sense, in a lot of the pictorial descriptions. Marriages gone sour and photographs from that day in particular or baby bumps or graduation day scenes made it to the final tally.

"I look like a dork…you look hot though, Shree…show it off, no one can tell you are forty plus…you’ve lost so much weight as well…" the second message from the same woman arbitrarily popped up, distracting me briefly from my voyeuristic social media morning pilgrimage.

I zoomed into one profile, just then. 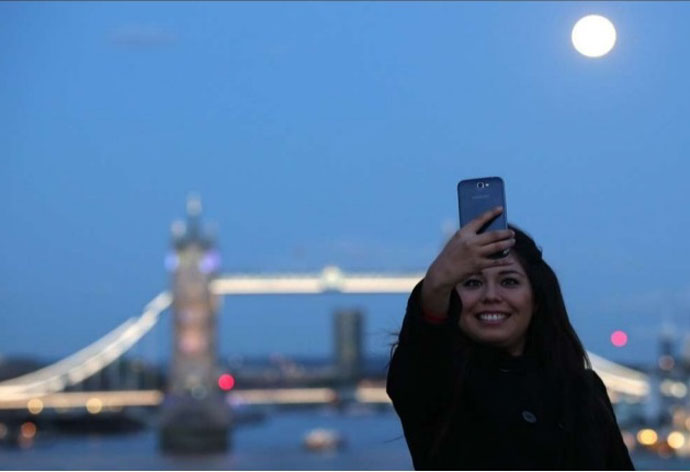 What was being celebrated was how 'young' we looked back then — but naturally. (Source: Reuters)

"Oh god…look at how dumbass I look…and those god-awful bras! Thank god for better lingerie…and tummy tuckers! Lol!" a woman I had once worked with bashfully admitted, her ‘before’ picture embarrassingly revealing abysmal fashion choices, as compared to her present-day persona — down to the breast enhancement job she had quite obviously chosen for herself.

What struck me when I began carefully studying the myriad pictures being shared so spontaneously by a swarming majority of my sex was how no one really spoke about the emotional milestones they had achieved or just how perfectly natural it is to have greyed or have lost a hideous amount of one’s once-luscious mane.

Of how dark spots and chin beards and sagging post-pregnancy tummies are more part and less parcel of biology — or, like in my case, post-three decades of battling PCOD and Endometriosis-related hormonal yo yo-ing meant that I was, at present, at the mercy of a short, muscular man named Prasenjit, on weekdays, between 10 to 2, who listened to Tirchi Topiwale (the sad version) on a loop.

How under the guise of celebrating ourselves, once again, we were perhaps falling for the most common booby trap in the book that there is.

The one that cosmetic companies, women’s lifestyle websites and fashion glossies had prescribed time and time again. The one that our nagging mothers, greying grand-aunts and bossy mothers-in-laws had preordered. The one that inevitably reduced us to our lowest common denominator — by deducing that demonstrating our physical beauty is a mark of feminine confidence and victory, when deep inside, we know, that it isn’t. Painting ourselves into that other corner? Aren't we falling for the most common booby trap in the book? (Source: Reuters)

Also, let’s be honest. Is there any point of this sort of superficial looking back?

What clothes we wore?

What lip-colour was in vogue?

Which hairstyle did we emulate from which reigning female actor in Bollywood?

Which fit of denim made the final cut?

I dig Facebook. I dig women (not to be interpreted sexually, if you know what I mean). I dig Facebook contests (I just did one which revealed the meaning of my name was the 'divine mother goddess' who is the symbol of fertility and reproductive prowess) that I have promised to take print-outs of and send each gynaecologist who had hitherto pronounced me as infertile, since the age of 19 when I underwent my first surgery for uterine cysts.

I even dig ‘befores’ and ‘afters’.

But all I am asking here and now is this: By sharing a hotter, fitter, more fashionable, better turned-up, more stylishly hair done-up self on social media, what were we proving?

That we won? At something? Over something? That we weren’t threatened by the prospect of our own diminishing youth? That we now had to work twice as hard, pitted against dwindling metabolism rates? That we had actually lost parents, siblings, lovers, spouses, pets, colleagues and cousins to things like breast cancer, cervical cancer, heart attacks and, a global menace that was swallowing us all, silently and stealthy — gnawing urban loneliness and manic depression? That the suicide rates of women globally were alarming?

In September, a report in The Guardian said the following: Nearly two in every five women in the world who kill themselves are Indian, according to a Lancet study that claimed the country’s suicides rates constitute a public health crisis. The rate of Indian women who die by suicide had reduced since 1990, but not as fast as elsewhere in the world, and now represents 36.6 per cent of the global female suicide deaths, the report in the UK medical journal held.

Indian women who died by suicide were more likely to be married, to be from more developed states and, by a large margin, aged below 35.

Poonam Muttreja, executive director of the Population Foundation of India, a public health group quoted in the same piece, blamed the trend squarely on early marriage — one-fifth of Indian women were still married off before the age of 15 — along with prevalent sexual violence against women and other fallouts of a regressive, centuries-old, patriarchal hierarchy where women were assigned two gender-specific roles — that of a wife and a mother — her womb, her destiny.

By highlighting our appearance from a time of yore, were we actually trying to make a breakthrough or fit into a cookie cutter mould?

Where we must follow a social media trend gone viral — just the way we ask women we hardly know in real life — by popping up unannounced on their chat windows — to fix a heart or a pink ribbon or change their display pictures to a certain sort of stereotyped, socially sanctified, silly copy-paste ritual. That every other woman must be doing. Or is.

So, here’s why I am staying out of the latest #tenyearchallenge, even as practically the whole of my timeline surrenders and succumbs to it.

To my own defence, there’s no Before.

And yes, I am skin deep. On days such as this.

Also read: Single women from urban India are no longer afraid to have one-night stands and affairs