When the stalwarts came tumbling down, these little warriors stood tall.

2018 has been a year of big releases coming tumbling down at the box office. We’ve seen some really bad films that would make you want to cry with a tub of ice cream going, “Why? Oh, why?”

But then, there were some outstanding ones as well.

Here are ten films that stood out for me the year that saw the three Khans fail one after another — Race 3, Thugs Of Hindostan and Zero. 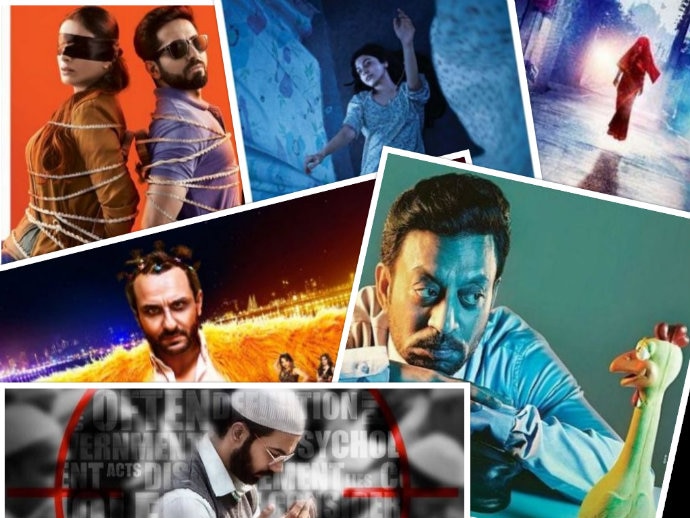 The year that was. (Source: DailyO)

It’s not every day that you get to see a leading mainstream actor go for a wacky role like Saif Ali Khan did in Kaalakaandi. And for that reason alone, this deserves a spot. A middle-aged man’s psychedelic journey through LSD, sex, life’s realisations, an unexpected friend in a transgender dressed in drag, all put together in a dark Shaitaan-esque tale and some brilliant acting. What’s not to love? The film’s lifetime collection may not have matched the opening of Padmaavat — which released just 13 days later — but it was a remarkable start to a cinematic year, indeed.

Technically this film doesn’t quite deserve to be on the ‘Best Films of 2018’ list, but I put it in for a certain bias. No, not because Zain Khan Durrani looked and sounded the way he did (that’s just half the reason), but because I don’t remember the last time we saw a woman with leucoderma play the romantic interest in a Bollywood film. In an industry that propagates warped beauty standards, Onir had the courage to place a seemingly ‘unbeautiful’ protagonist. And the best part — she didn’t feel incomplete because of that.

Bollywood seldom makes good horror movies, and even when they do, their ‘spirits’ are dampened by religious sentiments leaning right. Pari is not that. Anushka Sharma outperforms herself and makes one wonder how she manages to not perform in other films like Jab Harry Met Sejal or Zero. Not that Pari is a perfect film, but it’s an attempt worth recognising. And because of NH10, Phillauri and now Pari, Anushka deserves a clap.

By April all our resolutions had been boxed up, and just then came Blackmail, a film that celebrated flaws, flawlessly. Abhinay Deo made it nearly impossible for you to love, or even like any of the characters he played with on-screen — Irrfan, a man who masturbates to a picture of his colleague’s wife, Kirti Kulhari, a wife who is having an extra-marital affair with her ex-boyfriend, Arunoday Singh, the ex-boyfriend who married Divya Dutta for her money, and Divya, a debauched woman who only draws pleasure from belittling Arunoday. Blackmail taught me, in an Ugly-way, how beautifully evil we all can be.

Shoojit Sircar’s October received its due, yet, for the sheer magic it spun on celluloid, it feels like it deserved more. It was once said about Satyajit Ray that he can make a doorknob emote. I am not comparing Shoojit to Ray, but he did rinse, what could possibly be Varun Dhawan’s performance of a lifetime, out of him. What stood out for me was Banita Sandhu, more precisely her eyes, and made me realise how ephemeral life can be.

Bollywood had, up until now, walked a tightrope between the ‘hero,’ the ‘villain’ and the ‘anti-hero.’ The hero defeats the villain, and the anti-hero is usually just a victim of circumstances. Omar Saeed Sheikh is not a Sanjay Dutt or a Mohammed Azharuddin who deserves to tell his story. He is hardcore, a terrorist. Does he deserve a narrative? Hansal Mehta seemed to think he did, but not for one moment did he bestow evil Omar with a heart of gold. In that, Hindi cinema leapt decades ahead.

Stree is the satire Bollywood needed after decades of objectifying women. Men don’t understand consent, but Stree, the spirit that abducts men, does. Men don’t get the mental trauma women go through every day, so when they find themselves in a somewhat similar uncertain position, albeit before a supernatural force, it is hilarious. For once, in a small village called CHanderi, women are safe, free to move around. It’s the men who have to measure their steps. We need more films like this going into 2019.

Another twisted and wonderfully dark portrayal of those human emotions that hardly ever make it to the silver screen — Andhadhun is worth every penny spent. Of course, Ayushmann Khurrana deserves all the credit for choosing a script like this, but let's not, even for a moment, stop marvelling at that brilliant actor in Tabu. With Haider and Drishyam still fresh in our minds, we went in with a lot of expectations, and boy did Tabu deliver.

Remember Ship of Theseus? And Sohum Shah? Most of us have not been able to get over that film, and naturally so. Five years later, Sohum is back with Tumbbad, though it is nothing like that one, it reminds you what good cinema looks like. In the time of religious fanaticism, Tumbbad spins a story around a cursed town, built around a cursed temple of a cursed God. HE must not be spoken of, yet, the gold that this temple has buried in its heart is too tempting to let go of. So, there's religion on one hand and fear on the other, but, greed trumps all.

If by now you feel that October was THE month for movies in Bollywood, you are right. And then there's Shoojit's October, too (just saying). Badhaai Ho stood out for finally breaking the god-like mom and dad image Hindi cinema seems to be stuck in. Yes, they are as human as you are, and the film drove the message home like no other. Ayushmann Khurrana, take a bow, again, for picking this one.

Post your comment
#October, #Kaalakaandi, #Badhai ho, #Andhadhun
The views and opinions expressed in this article are those of the authors and do not necessarily reflect the official policy or position of DailyO.in or the India Today Group. The writers are solely responsible for any claims arising out of the contents of this article.