How Tripura won the 'war' against AFSPA

[Book extract] It took place in CM Manik Sarkar's state after 18 years - Manipur and Nagaland have been waiting for nearly 60.

"The Indian state has been using Kautilya’s four principles of statecraft - sam (reconciliation), dam (monetary inducement), danda (stick) and bhed (split) - in varying mix to control and contain the violent movements in the Northeast."

Subir [Bhaumik] tosses these four words out with relish, especially at public events, enlivening discussions and prompting much laughter at the irreverent description.

These views resonate through his writing and experiences, for his home state Tripura has excelled in all four, despite its tiny size. And one of the key players of this approach is the mild-mannered chief minister Manik Sarkar, one of the calmest political leaders that I have seen. Sarkar, who is always seen in public in the Bengali Hindu middle class man’s trademark uniform, a white cotton dhoti kurta, has implemented to near perfection these four principles of statecraft that the ancient Indian equivalent of Machiavelli enunciated.

First, with a combination of guile and pressure, he broke the back of the two armed groups that had plagued ordinary life and kept the security forces on their toes for over two decades. These were the All Tripura Tiger Force (ATTF) and the National Liberation Front of Tripura (NLFT), which like other "insurgent" groups of the region proclaimed their determination for independence from India. They took over a campaign that had been first driven by the Tripura National Volunteer Army (TNVA), led by Bijoy Hrangkhawl. After eight years of life in forests and in exile in Bangladesh, Hrangkhawl decided he had had enough. He signed an agreement with Rajiv Gandhi, among a spate of goodwill accords that came from that young leader’s term before his assassination in 1991. Hrangkhawl joined the "mainstream" and even launched a pro-tribal party that was closely allied with the Congress Party. This was the Indigenous Front of Tripura (IFT), whose fortunes waxed and waned with those of the Congress. But as Manik Sarkar realised early on in his tenure, a policy of appeasement was certainly not going to deal either with insurgency or bring about confidence among the dominant Bengali Hindu population or the tribal minority. The two groups had bases in the hill areas of the state but also slipped in and out of Bangladesh where they had camps and safe houses. Taking them on was turning out to be a thankless job.

Bhaumik’s essay in a book he edited has detail, drama, blood and gore. He tells in detail how Sarkar and his CPM predecessor, the veteran Nripen Chakravarty, worked out a strategy with the police, intelligence officials and the Army to take out insurgent elements based in Bangladesh. During an earlier time, the Congress leader of the 1960s, Sachindra Lal Singa, who was chief minister, cultivated his contacts with Sheikh Mujibur Rahman, later founder of Bangladesh, to support the Awami League. Sheikh Mujib was charged by Pakistanis in what was known as the Agartala Conspiracy case, where he and others were accused of plotting to overthrow the government in Dhaka. The case was later dropped, but Bhaumik says it had its origins in a secret mission led by Sheikh Mujib to the Tripura capital to ask Singa for armed assistance should they need it.

But in the first decade of the 21st century, Manik Sarkar, according to Bhaumik, decided to design his own external security policy, with minimal contact with New Delhi. He supported his head of police, a much reviled officer in Assam called GM Srivastava, his chief secretary VM Tulidass and an army intelligence officer in creating a strategy that would hit the rebels quickly and hard. The killing of Sarkar’s senior ministerial colleague, health minister Bimal Sinha, was probably another trigger for the crackdown.

Between 2003–2006, special units launched around 20 attacks on militants based across the border in Bangladesh, using a mix of rebels who wanted to surrender (but were instead asked to attack their former colleagues) and local Bangladeshi gangs and thugs, who were enticed with funds and the promise of more.

In 2008, Sheikh Hasina came to power in Dhaka in an overwhelming electoral victory and the rebels in Assam, Manipur and Tripura, who had lived there for years without a worry, found that their days were numbered. Hasina authorised strong assaults on the ATTF and the NLFT, which were already under pressure from across the Indian side. Within a matter of time, the rebels, softened up by body blows from both sides, found their local political bases crumbling as CPM cadres returned to the hills to assert the party’s presence and determination to take the rebels on politically.

Election after election saw the growing clout of the leftists and the diminishing hold of the insurgents; each group was said to be aligned to either the Congress or the Marxists.

This triple thrust - military on either side of the border and political pressure - resulted in large-scale surrenders and the dismantling of the terror machinery, which had created a system of abducting businessmen as well as officials for ransom to sustain their operations.

The armed movements shut down, trade and businesses in this Left bastion boomed as Bangladesh opened up land routes, allowed shipments of equipment and food grains, improved rail connectivity and opened up an internet gateway to improve communications in the Northeast. India’s Prime Minister Narendra Modi announced a $2 billion line of credit as Hasina delivered on promises which put northeastern insurgents in her country on the mat.

Modi also promised quick implementation of the earlier line of credit of $800 million and full disbursement of $200 million. The prime minister remarked in Dhaka that connectivity between India and Bangladesh by road, rail, rivers, sea, transmission lines, petroleum pipelines and digital links would increase. "Today, we have unveiled some of the pathways to this future," he said. 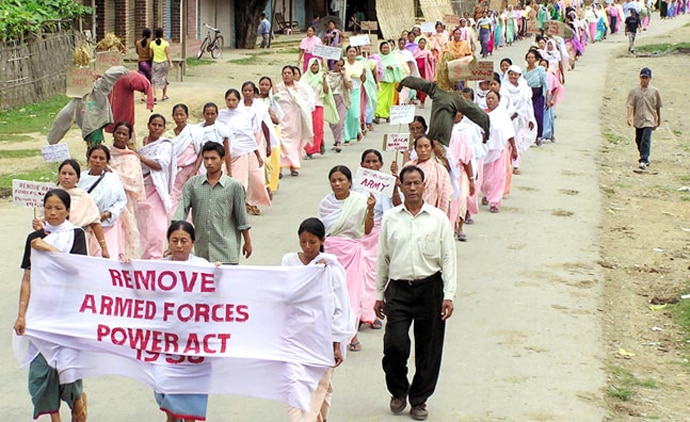 A march against AFSPA in Manipur. (Credit: India Today)

A combination of military pressure and political sagacity had achieved what two decades of standard anti-insurgency, manufactured consent and bursts of rebel surrenders and bouts of conflict had failed to achieve.

Manik Sarkar’s rethinking of policies where he converted a major local problem into an opportunity with bold initiatives on both the security and political front was the key. Sarkar "merely insisted that he was the small leader of a small state facing huge problems from across the border which the centre had failed to tackle". But the upturn in Tripura’s politics went beyond dealing with insurgency and improved economic conditions.

Sarkar felt confident enough to take a dramatic and far-reaching decision on which the government of India had refused to bend for nearly six decades and which few of his fellow chief ministers were sure of. He recommended to the Centre, run by the BJP, a security-conscious and -driven party, the lifting of the Disturbed Areas Act and its companion, the AFSPA. He faced no opposition as the internal conflict was virtually zero; peace was not a mere slogan but a lived reality, it wasn’t at hand but visible in daily conditions.

Ten years after the Justice Jeevan Reddy Committee had submitted its report, at least one state government, smart, small but gutsy and known for competence, had agreed to remove a law which enshrined inequality, injustice, impunity and immunity and send the security forces back to where they belonged - the barracks and the borders. This it has done on the strength of its own record and the vision of its leaders.

Manik Sarkar lifted the application of the laws - he can’t repeal them as they are a central legislation and can be repealed only by Parliament - and did so without the social and political pressure of a powerful hunger striker like Irom Sharmila or activist bodies like the Naga Mothers Association or the human rights groups in Manipur or Assam and Nagaland.

He did this on his own. That makes it all the more remarkable.

"In view of the significant taming of terrorism in Tripura, the council of ministers today (Wednesday) decided to withdraw the AFSPA from the entire state," Sarkar told the media, noting that it was no hasty decision but one that had come after much deliberation involving all departments. "The security forces recently exhaustively reviewed the law and order situation in the state. Considering the reports of the security forces, the council of ministers decided to recommend to the Union home ministry to issue a notification to withdraw the AFSPA."

Insurgency activities in the state "are now reduced almost at zero", he concluded.

It came a decade after Thangjam Manorama died fleeing from her captors.

As we have seen elsewhere, insurgency related violence in the key states which saw armed rebellion have diminished. More people die in road accidents in the Northeast than in state-rebel conflicts. There are more killings in internecine ethnic clashes than in the latter. Militant groups do play a role in such attacks and counter-attacks but they do so without threatening the structure of the state or harming internal security.

What started as a revolt against the "idea of India" has become a law and order problem.

Tripura had flagged the opportunities that grow out of good governance and a mix of political and military sensibility.

The question that hangs before the Centre and the other states and their people is why they cannot follow the Tripura example, not the doctrine advocated as foreign policy but the trinity of internal resilience, strong political interventions and sensible government which enabled Manik Sarkar to do what he did on May 27, 2015.

It took place after 18 years in Tripura - Nagaland and Manipur have waited for nearly 60. That surely is a long time. Manorama’s family and thousands of others will testify to that.

To build an area of peace in the region is especially important at a time when the centre’s Act East Policy is taking shape and the government wants a closer relationship with the so-called "economic tigers of Southeast Asia". In the long run, India wants to emerge out of the confines of the stagnating and divided South Asian Association for Regional Cooperation (SAARC) to tap the economic potential of ASEAN, register itself as a regional power and to try and balance China’s growing influence in the region.

Former prime minister Manmohan Singh stated that it is not merely an external economic policy, it is also a strategic shift in India’s vision of the world and India’s place in the evolving global economy. Most of all it is about reaching out to our civilisational neighbours in South East Asia and East Asia.

If this is to happen, then the Northeast needs to break the shackles of many controls which hold it back and which divide the region from the rest of India.

Repealing AFSPA is central to the plan to open up and reach out. The region needs to be at peace within, with adequate infrastructure and trained and capable human resources, if it is to play the role of a bridgehead to South and Southeast Asia.

Also read: ‘Do you have rapists in uniform?’: Why SC asked Indian Army this haunting question

#Manipur, #AFSPA, #Tripura, #Northeast
The views and opinions expressed in this article are those of the authors and do not necessarily reflect the official policy or position of DailyO.in or the India Today Group. The writers are solely responsible for any claims arising out of the contents of this article.