After being a ‘khiladi’ for a long period in his career, Akshay Kumar has emerged as the patriotic hero of modern times.

Anurag Singh’s upcoming film Kesari will show the Battle of Saragrahi on a grand scale. The real-life battle, which has inspired the idea for the film, had taken place in 1897. It was a numerically one-sided affair, with 21 Sikh soldiers taking on the might of around 10,000 Afghans.

The Sikhs were led by Havildar Ishar Singh, who, along with the other soldiers, was posthumously honoured with the Indian Order of Merit, the highest gallantry award for an Indian soldier under the British rule.

In the film, which is due next year, Ishar Singh’s character is being played by Akshay Kumar. The choice of the story suggests the film would not tank, as long as the writing, direction and performances aren’t pitiably bad. The subject, as they say, is a safe one.

Kumar’s recent preferences reveal his desire for working in films inspired by real-life stories. After being a "khiladi" for a long period in his career, he has emerged as the patriotic hero of modern times. Our dominant narrative continues to focus on the three Khans; yet, history shows that he has been giving hits almost unobtrusively. Many of Akshay Kumar's roles indicate he is keen on undergoing a complete makeover. (Photo: Screengrab)

The man behind several successes, he is ranked seventh in the list of Forbes’ highest-paid actors in the world in 2018. That also makes him the highest paid Indian actor, the Khans included. The surprise factor might be the outcome of his inability to deliver a record-breaking blockbuster like Dangal. But he has been prolific, which has worked for him. Besides, he has been a judicious strategist, too.

Gold, his recent release, is a seriously flawed film. Inspired by India’s first gold medal win as a free nation at the 1948 London Olympics, it is positioned as a saga of revenge against Great Britain, the erstwhile masters. The approach to writing is reductive. There is too much focus on the team manager (Kumar), less on important aspects such as how the winning combination was formed. Similar shortcomings notwithstanding, the film has struck "gold".

Gold’s brisk business is a reminder that Kumar’s audiences have accepted his new image. In Padman, which was inspired by Arunachalam Muruganan tham’s real-life story, he had taken on the role of a man who finds a way to produce low-cost sanitary napkins. As an everyman at the forefront of social change, Kumar’s performance was noteworthy.

Many of his recent choices indicate he is keen on undergoing a complete makeover. Toilet: Ek Prem Katha focussed on the need for having properly constructed toilets.

While slipping in some praise for demonetisation, the film sermonised about several subjects such as gender equality, women’s education and superstitions.

Playing a character that champions the cause of a swachh India, Kumar was a victim of bad writing marred by confused priorities. The film worked at the box-office, which showed that his choice had found many admirers among film-goers.

Kumar is not the best actor-superstar in the Hindi film industry. But he is known to be a hardworking actor, which showed in Rustom, a mediocre courtroom drama inspired by the KM Nanavati case. He played a Navy commander, who is always dressed in a spotless uniform and kills his wife’s lover by pumping three bullets into his body.

The story, a love triangle, mutates into the saga of a patriot who eventually walks free after committing a crime. That didn’t seem right; yet, the viewer’s approval of the man in uniform resulted in a commercial success. 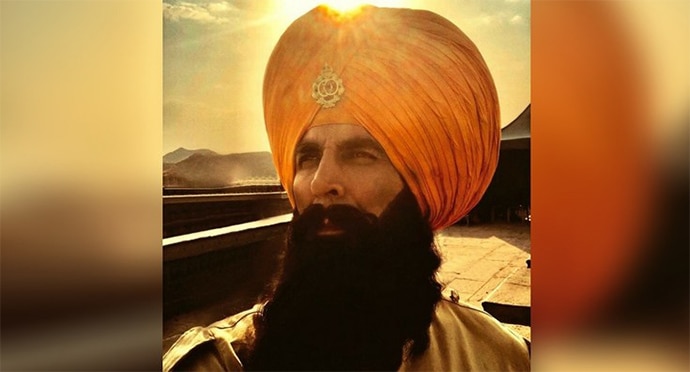 Kesari will show the Battle of Saragrahi on a grand scale. (Photo: Twitter)

Airlift was based on the evacuation of Indians who had been stranded in Kuwait after the latter was attacked by Iraq during the first Gulf War in 1990. Kumar was seen as a tough businessperson, who played a huge role in making the seemingly impossible, possible.

His character was fictional, leading to questions on why it had not been modelled after a real person from that period. However, his performance was well-received by viewers and critics in general. In Kesari, Kumar will be seen as a person who prioritises national interest above everything else. His recent success stories seem to indicate that he will have some more good news in the next few months.

#Gold, #Kesari, #Bharat kumar, #Bollywood
The views and opinions expressed in this article are those of the authors and do not necessarily reflect the official policy or position of DailyO.in or the India Today Group. The writers are solely responsible for any claims arising out of the contents of this article.