What Allama Iqbal's poetry can teach us about Guru Nanak

The Sufi poet's 'Nanak' is of high relevance in contemporary India.

For Iqbal, exploitation and deceit in the name of the god is disgraceful to the religion for it ignores - social justice and equality - the very essence of life. This would be clearer when Iqbal's poem "Nanak" from his Bang-e-Dara is reread: 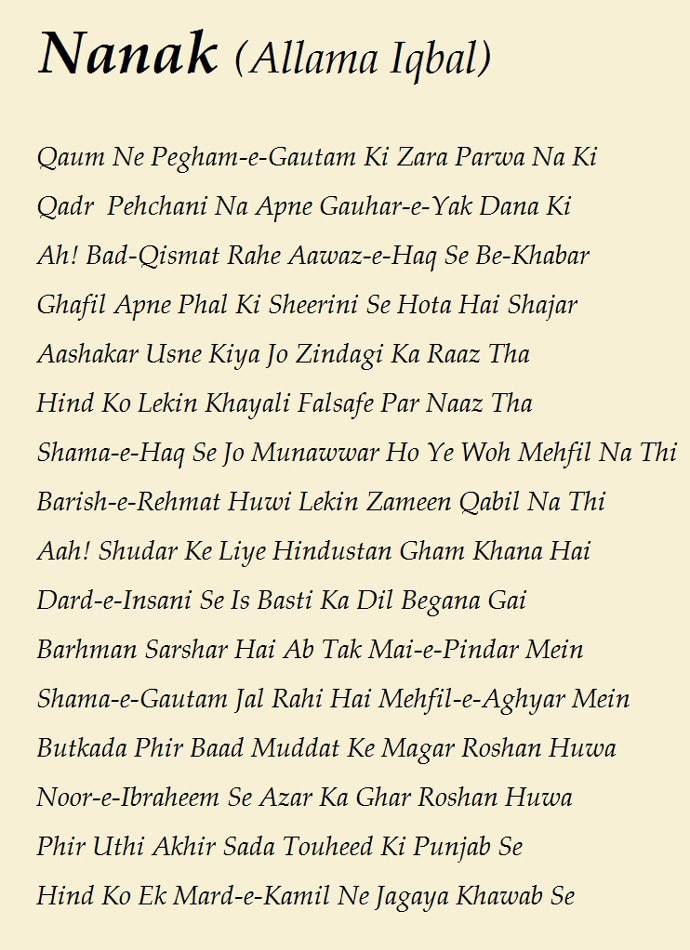 Iqbal's poem hinges mainly upon four themes - Gautama Buddha (563 BC-483 BC) and his teachings, essence of truth and monotheism, spirit of social justice and equality, and Guru Nanak (1469-1539). Out of eight couplets in the poem, the top six are dedicated to the first three themes; while the last two couplets are dedicated to Guru Nanak - the founder of Sikhism and the first of the 10 gurus of the faith.

Iqbal says that the Indian nation never valued and cherished Buddha and his teachings. Buddha called for the spiritual augmentation of one's life by shunning all kinds of obsessions with worldly desires. For Iqbal, Buddha was a "gem" and India could not identify the worth and value of its "own gem"; for Indians were particularly tinkering with the worldly pursuits of prestige, power and property. While Buddha was ferrying them to the spiritual path of salvation, they, owing to their own ignorance, were unaware of it. Alas! Indians were unmindful of the divine truth revealed by Buddha in the same way a tree remains oblivious to the sweetness of its own fruits.

Buddha's teachings are premised upon the Four Noble Truths that establish that the sufferings in human life can be quelled by disentanglement from worldly obsessions and desires.

These are manifested in the form of quest for power, prestige and property. It was the divine truth of life revealed by Buddha to his people. But Indians continued to follow their own caste system. Discriminating hierarchies and the social hiatus prevalent at that time is proof of the reluctance Indians showed towards the truth and divine light. India, then was a barren land where heavenly rains, in the form of Buddha's teachings, fell but nothing came out of it. Speaking on the long precedence of subordination and exploitation of Shudras - the lower most caste in India - Iqbal says with anguish, "India had always remained an abode of sorrow as the Indian society was devoid of humanitarianism and compassion." Brahmins in India were intoxicated with ego and pride by the dint of the self-formed casteist dogmas. While the message of Buddha was embraced by people in foreign lands such as China, and Japan, India couldn't benefit from the divine light.

In the last two couplets, Allama Iqbal, the Sufi poet, has talked about Guru Nanak and monotheism. "India was now illuminated after a long time with the birth of Guru Nanak in Punjab; monotheistic commandments would be rejuvenated in Punjab," said Iqbal.

Now, the word monotheism should be analysed in a broader perspective and it needs due consideration in today's Islamophobic world. Monotheism means believing in and submitting to only one god. It must not be confined to the religion of Iqbal or of any other Muslim. Apart from Islam and Sikhism, Christianity and Judaism are essentially monotheistic in nature. References are also found in Vedas about the monotheistic nature of Hinduism. And it is sine qua non of monotheistic literature of religions that religion must first promote the spirit of social justice and equality. For instance, when Moses was issued the Ten Commandments by his Lord, he was directed by his Lord to firstly challenge the Pharaoh.

He was not directed, at first, to meet his people and teach them the rituals on "how to offer prayers". Rituals were secondary, revolution was the primary task for Moses. Muhammad - the (last) Prophet of Islam -ordered proscription of "a man bowing before a man". For man is born free and they must not be subjected to any sort of exploitation, submission and oppression by the other man. And it is the foremost duty of a monotheist to help the masses end such submission and exploitation. With such vision, Guru Nanak, the mard-e-kamil (the perfect man) for Iqbal, started his mission and awakened the slumbering souls of India.

The poem "Nanak" is of high relevance in contemporary India. When there is an exponential bout in unpleasant rituals and innovations within religions creating differences among followers, environmental pollution, ignorance at the cost of rationality and scientific temper, believers must come forward to unravel the tenets of their religion that call for material betterment of humanity.

#Prophet Mohammad, #Casteism, #Buddha, #Guru Nanak
The views and opinions expressed in this article are those of the authors and do not necessarily reflect the official policy or position of DailyO.in or the India Today Group. The writers are solely responsible for any claims arising out of the contents of this article.

Author is a research fellow at the Department of Political Science at Aligarh Muslim University.