Delicious andarsey, once made with rain water, deep-fried in large kadhais brimming with ghee, are inextricably linked with the smell of wet earth, songs of monsoon loves and Indian longings.

Yet, my Nani and a gaggle of aunts, congregating for the summer break with their brood, would send fervent demands for Mumtaz Bhai’s andarsey to be sent post-haste from Rampur, along with the essential monsoon paraphernalia. The requirements included succulent langdas, bright green and red kacchi bangles for the married daughters and daughters-in-law and hand-dyed, crinkled cotton chunris for all the girls.

The andarsey — lovingly refried and resurrected to their juicy crispness — were served at the barsati singing sessions, watching the rains pound the brick courtyard. 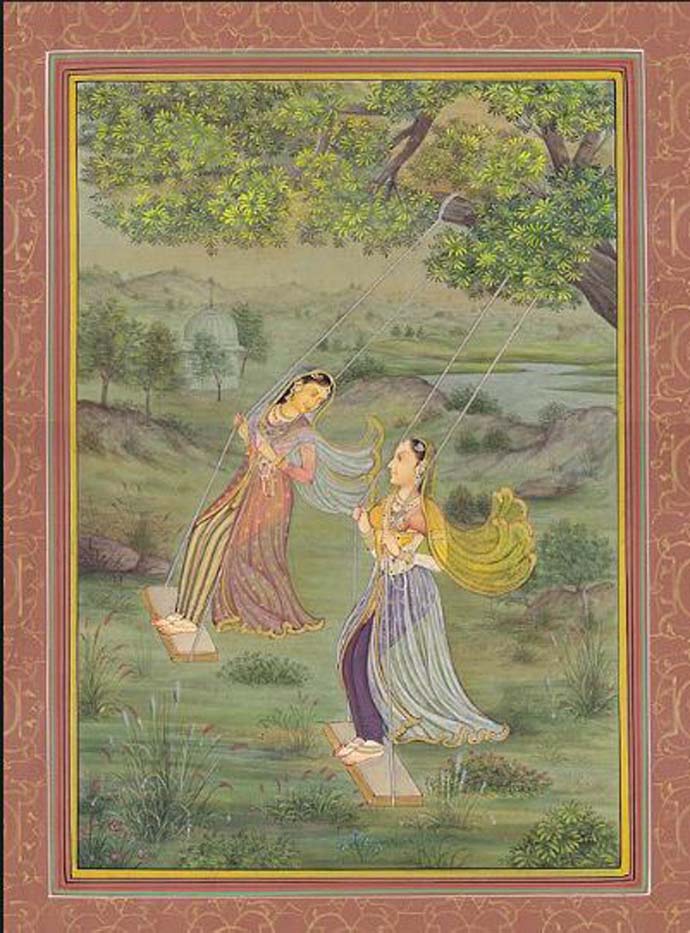 The wait and the celebration run through time in India. (Photo: Wikipedia)

The Rampuris, with their latent agrarian consciousness, engage intensely with the monsoon. There is a subculture of romantic chaar bayt quartet songs and monsoon fare that comes into play as the first purple, pregnant clouds congeal in the sky. Sawanis or monsoon feasts are organised in mango orchards that edge the city with swings for ladies and children, soulful barsati songs, fried treats and freshly plucked mangoes in iced buckets.

Invariably, there are stories and narratives of magnificent sawanis held in the orchards of the Benazir Palace by the Nawabs. The historical records of the sawanis and the monsoon feasts goes back to the time of Nawab Kalbey Ali Khan (1865-1887). The Pathans migrating from the cool climes of Swat and Roh highlands passionately rejoiced in the relief of the monsoons. Sweet Monsoons: Fried andarsey and the smell of rains is what nostalgia is made of! (Photo: Via Author)

The final flourish at all monsoon feasts is the piping hot, sweet andarsey brought from the local halwai.

Andarsey, the traditional monsoon sweets, are an epicurean delight with their crunchy, reddish-gold crust, freckled with crisp sesame seeds and fluffy, grainy, moist insides. It is prepared from rice flour, ghee and sugar batter shaped into flat cakes (sometimes with a hole at the centre) and deep-fried. The earthiness of rice flour is balanced with the nutty flavour of the sesame seeds.

Conventional cooking wisdom dictates that it should be kneaded in rainwater to make it extra-spongy. Rainwater contains bicarbonates — it must have helped the dough rise when it was traditionally prepared. So, though some halwais prepare it throughout the year, it is believed that the true masters only start off the monsoon sweet after the first monsoon showers have brought down the dust and the rainwater is pure enough.

No monsoon is complete without the delectable indulgence of Mumtaz Bhai’s andarsey. People wait for him to begin frying the sweet and declare the season open.

Mumtaz Bhai, the founder of the iconic shop, is, of course, long gone and his grandson claims that the recipe has been handed down the generations from his ancestors who worked in the Nawab’s kitchens. The Rampuris scoff at the claim — nearly every cook professes descent from the line of royal chefs!

Mumtaz Bhai’s shop, with its grimy awning, sooty walls and faded sign is anathema to its glorious repute. It has not expanded or modernised since its inception which, he says, dates to right after the merger of Rampur State into the Indian Union in 1949. There must have been a series of ‘Mumtaz Bhai’s’ — at least four since the 1950s, in greasy kurta pyjamas, face glistening from the heat of the fire, briskly frying andarsey and other sweets.

The current Mumtaz Bhai starts frying the fritters around five in the evening and the large kadhai brimming with ghee and andarsey discs is soon surrounded by customers pulled in by the sweet aroma, watching the andarsey acquire a deep golden hue. There is a directness to the experience of watching the andarsey being fried, the personalised greetings and the casualness of the newspaper packets bearing the sweets.

Lining up for andarsey is a male domain — but I cover my head with a dupatta, brave the curious stares trying to slot me, and take my place in the expectant circle. I greet Mumtaz Bhai, tell him that I have heard so much about his andarsey that I had to come myself to see him make it. Royal to Local: The Andarsey has a rich and fascinating history. (Photo: YouTube/ Kitchen With Amna)

He smiles, mopping his face, and asks, "Bibi, where are you from?"

I have to cite ancestral and mohalla references since all introductions here begin from grandparents, even great-grandparents.

"Do you still use rainwater?" I ask. "Journalist," I hear someone whisper.

"No, no. Rainwater is so dirty now. We use soda," Mumtaz Bhai laughs. “The secret is our honesty. Most roadside shops fry andarsey in low-quality oil, which leaves an aftertaste. We only use ghee."

I start munching from the greasy paper packet as soon as I get on to the rickshaw. The sweet is freckled with melon seeds rather than sesame seeds now — but the flavour is sacrosanct. Or so I thought.

"They don’t taste the same any more. There was a subtle caramel flavour that I miss," my mother has the most discerning taste buds and I scurry to the Raza Library in search of the missing ingredient.

Several Persian and Urdu manuscripts on Rampuri cuisine dating to the late nineteenth century describe the process of preparing andarsey in detail. The rice was soaked overnight and ground to a fine paste. It was then kneaded with ghee and sugar syrup to prepare the pastry. So, the sugar cooked to a thick syrup must have contributed to the caramel taste that Mamma remembers from her childhood.

One recipe advocates mixing some curds to make the dough rise. I guess soda was not easily available or used in Indian cooking at that time. The legend of Rampur: It is said that the Pathans brought the dish to India from Afghanistan. (Photo: YouTube/ food hub)

On my way back from the library, I ask a frantically busy Mumtaz Bhai Jr. about the sugar syrup. He says he just puts in powdered sugar into the rice flour with some ghee and soda powder. The rice is not soaked overnight any more since rice flour is readily available.

Somewhere we abbreviated the process, changed the ingredients — and forgot the essence of the dish.

The antecedents of andarsey cannot be determined. It is called andarsey only in the North Indian ‘Rohilla belt’ and Pakistan. The Sufi saint, Bulley Shah’s shrine in Kasur, near Lahore, is famous for several types of andarsey. It is generally called anarsa or adhirasa — a traditional festival sweet prepared during Diwali all over the country. The recipe is simple and quite similar everywhere with little variations — some use jaggery instead of sugar. On Diwali, it makes sense to have andarsey or anarsa because of the rice harvest but the craving for andarsey watching bursts of the monsoon is a cultural response.

Lucknow and Jaipur have a similar tradition of monsoon anarsa. Which raises doubts about the Rampur oral tradition that andarsey are a sweet brought in by the Pathans from Afghanistan. Maybe it was a traditional Indian harvest sweet, which was incorporated into the monsoon food culture of the region.

Andarsey are rarely made at home in Rampur and we wait for our crunchy supplies from the halwais. Mumtaz Bhai Jr. started frying andarsey rather late this year because of the delayed monsoons, even though the ingredients have nothing to do with the rains any more.

But there is a time for everything here and the pleasures of the tongue dictate an expectant wait for the fullness of time — and for abundant rain. Rain, rain: Don't go away, for the cultural heritage of India is inextricably tied with you. (Photo: India Today)

Some of my non-Rampuri book club friends had never heard of andarsey, so we arrange a monsoon party at Sofia’s farm. We gorge on freshly fried andarsey, watching the mango pluckers shimmy up the trees to pluck the langdas plumped up and sweetened by the rains, and try to sing the simple lilting chaar bayt barsati song composed by Nawab Raza Ali Khan (1930-1949), laughing at the quaint, ever pining heroine.

At such a time, I’m filled with longing for my beloved).