Qimami Sewain are the heart and soul of Eid, so much so, that it would indeed be a cardinal sin to not have them on this auspicious day.

'It’s Eid, let us sneak into the tavern unobserved,

The faithful are busy feasting on sugar and honey'.

Attu Bhai’s qimami sewain used to be the first disaster of tense Eid mornings. They came out too sweet, curling into shocked turgidity, angry red from the colour he added to hide their uncompromising stance. Some Eids they would be at the other end of the tangent-too soft, lumpy and barely sweet. Rescue operations would be mounted-pouring sugar syrup, putting in milk to make them softer and palatable. Once we even put the inedible mass into a pressure cooker!

‘Uffo, Attu, your sewain is as hard as your hair!’ Nani amma would despair.

Attu Bhai had black, tightly curled hair and from that time, the texture of qimami sewain inhabited a hairy area in my mindscape. I avoided the dish for all my growing years.

Attu Bhai was one of the large brood of orphans brought up by my great grandmother, growing up as a band of loyal servants around ‘Kaptanni Bibi’ who delighted in arranging their marriages, celebrating the birth of their children, admonishing and rewarding them like a benign, despotic queen. Delicious, creamy, sugary heaven! Qimami Sewain is one delicacy no Rampuri can get enough of (Photo: YouTube)

After her death, most of her adoptive children were settled into different professions by my grandfather. Attu Bhai remained with us for the longest time graduating from an odd job boy to finally taking up the kitchens, reluctantly taught by our old cook, Bakka. The latter, like the quintessential Rampuri cook, didn’t reveal all his secrets to Attu, leaving us mourning for his curries and kababs. There was always an essential ingredient, a fine print of sub procedure missing from Attu Bhai’s cooking. In the Attu era, the kitchen became a dank, barely clean place and the meals had an unpredictable taste. Finally, a position was found for Attu Bhai in the University kitchens and the household heaved a sigh of relief.

Demonstrating his love and undying loyalty, Attu Bhai would make his Eid appearance and insist on making qimami sewain. My Nani was an armchair cook and dining table food critic and the daughter in laws were too scared to take on the onerous task of preparing large quantities of the signature Eid dish; so we ate or avoided Attu Bhai’s inflexible, over sweet sewain till his death sometime in the nineties. When I first ate the real qimami sewain at a friend’s place in Lucknow, with the sugary qimam dripping from the fine, delicately stewed strands, I immediately overcame my childhood trauma and submitted to a lifelong affair with the syrupy, melting vermicelli dish. Qimami sewain entails the cooking of sewain in sugar syrup or qimam. It is essentially a Lucknowi and Mughlai dish and was probably imported into Rampur as it does not feature in the list of sweet meats in most of the Rampur cuisine archives dating late-nineteen century. A mid-twentieth century recipe book on royal dishes describes the method of preparation which is very different from our practice. The sewain is fried, put into a muslin cloth and blanched in boiling water, just enough to make it soft. Then it is combined with sugary qimam and slow cooked in a sealed pan- or put on dum.

We don’t blanch the vermicelli any more but some cooks put a bit of water or milk into the fried vermicelli to make it soft before the onslaught of sugar syrup. The qimami sewain requires a skillful balancing of sweetness and texture- each strand separate from the other, but never crisp and the syrup forming a glistening halo around the sewain. In the hands of the inexperienced, the sweet syrup poured over the fried vermicelli might make the thin strands recoil and curl up in inflexible horror. The master chefs indulge in making the dish with up to eight times (athguni) weight of sugar to that of the vermicelli. We manage double strength sugar syrup (duguni) sewain with great difficulty. Our Attu Bhai attempted the classic dish and failed every time. If you are not an experienced cook, your vermicelli might recoil and curl up (Photo: Wikimedia)

Most Rampuri households have a shortcut, simple style of cooking the dish. They don’t prepare the sugar syrup. Instead, fried sewain is blitzed with sugar, water and milk. It turns out well, but never as magnificent as the painstakingly cooked qimami sewain. The puritans don’t call it qimami sewain since it does not entail making sugar syrup or qimam. A similar recipe is described by the Pakistani food writer, Bisma Tirmizi. Somewhere along the way the abbreviated method of cooking the dish became more popular and the strands of vermicelli became thicker to accommodate it.

The sewain probably originated from the Greek and Turkish kataifi pastry made from unleavened dough sieved through a perforated plate into thin strands roasted over heated metal plates. Kataifi pastry, a softer version of our sewain, is packed into airtight bags and frozen. It is used as the base for the celebrated baklava, kanafeh as well as savory dishes in Greek, Turkish and Middle Eastern cuisines. ‘Remembrance of Days Past’, a memoir of the princely state of Rampur by Begum Jahanara Habibullah, describes the preparation of sewain pastry in the homes of Rampur before Eid. The wheat dough was squeezed through a perforated wooden contraption, the thin strands were separated and hung out to dry on trees. Thus the texture, the ingredients and the methodology of preparing the kataifi and sewain are similar. Both the pastries are baked or fried and put into sugar syrup with the thin strands absorbing the sweetness. The Turkish, Palestinian kanafeh has the look and the texture of our qimami sewain with the fried and baked kataifi pastry drizzled with sugar syrup. The only distinguishing factor is that the kanafeh has soft goat cheese sandwiched between layers of vermicelli.

The kataifi vermicelli itself is pliable and highly versatile and can be shaped into baklava rolls filled with dry fruits soaked in sugar syrup or honey as well as savory sea food rolls. Indian vermicelli, by contrast, is crisp, brittle and used to make two types of Eid dishes –qimami sewain and sheer khurma. Muzafar is the less sweet option of qimami sewain prepared with liberal use of saffron.

“After Eid prayers on Eid ul fitr, my father always opened his fast with sheer khurma as did everyone else.” writes Begum Jahanara Habibullah. Shaista Ikramullah’s work, ‘Behind the Veil: Ceremonies, Customs and Colour’, echoes the same practice followed at the Mughal and Lucknow courts in the late nineteenth century. Sheer khurma, a milk based sewain was traditionally the breakfast dish and the first sweet to pass the lips of the faithful on Eid day. 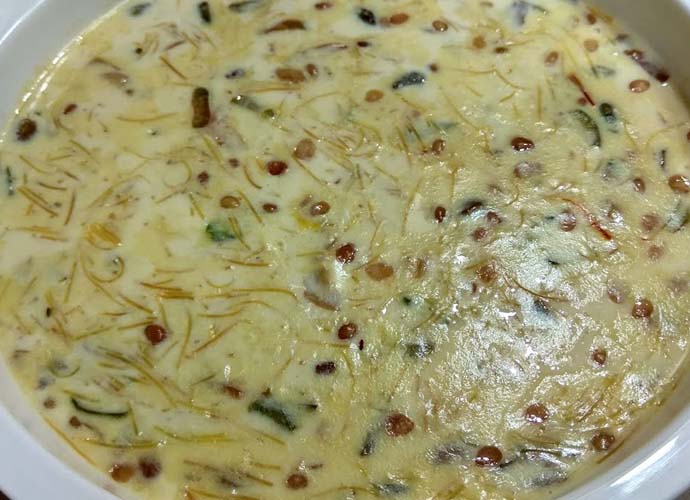 Sheer Khurma is creamy, milky heaven for those who break their fast on Eid Mornings (Photo: YouTube/ Shan e Delhi)

It was a lifesaver in Attu Bhai years. It’s a simple dish consisting of two main ingredients-milk (sheer) and dates (khurma). The milk is boiled and the dates, dry fruits and sugar added to the base. Sewain is used to add a certain consistency to the dish. Probably sewain was added later to the simple milk and dates Middle Eastern sweet as it travelled through the land of the versatile kataifi pastry or, maybe, the two were married in the court of Turkish Delhi Sultans.

One would incline towards the latter as the Indian subcontinent style sheer khurma is not found in Turkish or Middle Eastern cuisines.

Very like the loyal Attu, my mother is a one Eid dish cooking person. Sheer khurma is still the first dish to be cooked at home and Mamma, more comfortable in the operation theatre than the kitchen, takes charge like a surgeon with at least one assistants on each side and the ingredients arranged in a proper order around the stove. Her face sweating from the steam from the bubbling milk, she peers into the large deghchi, thrusts out a hand and commands, ‘Coconut!’, ‘Sewain!’, ‘Sugar!’. The ingredients are handed over like scalpels, scissors and clamps, the assistant swabbing her brow intermittently. We break our fast with her peerless sheer khurma on Eid mornings.

Also Read: The perfect khichdi: A dish that opens the door to a Rampuri's heart

#Eid mubarak 2019, #Eid 2019 date in june, #Eid 2019 date, #Eid qimami sewain
The views and opinions expressed in this article are those of the authors and do not necessarily reflect the official policy or position of DailyO.in or the India Today Group. The writers are solely responsible for any claims arising out of the contents of this article.