Daily Recco, November 3: Axone, and the pungent message of racism

When food, which is the strongest foundation of any tradition, becomes a bone of contention between two cultures, it results in a hilarious-yet-hard-hitting movie like Axone.

When you live away from your homeland, to what extent will you go to have your favourite food that connects you back home? That forms the storyline of Axone: A Recipe for Disaster (2019).

A group of friends who are from the Northeast living in Delhi, embark on an adventure as they try to cook and surprise one of their friends on her wedding day and encounter various troubles while doing so. They are making pork with ‘axone’ (pronounced as akhuni — literally meaning strong smell), which is a pungent Naga delicacy. 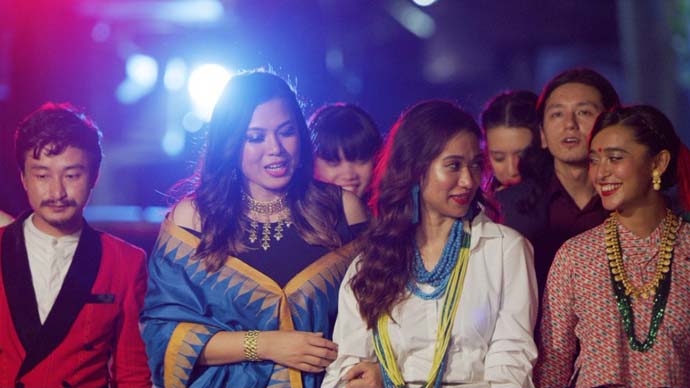 Axone brings out the pungent racism and the casual nature of it that those from the Northeast face. (Photo: A still from the movie)

Tense subjects like the racism that this group combats, the social aspirations of those from the Northeast and how they are questioned on their basic right to cook and eat their native food have been dealt with timely wit that hits the nail on the head. Their struggles and grit are evident as the actors traverse through the narrow bylanes and loud (and rude) landlords in the capital city. Actually, the city could be any metro in the country — the basic script is common. Only the names and the language vary. Stereotyping is not a one-way street; the film brings out the idiosyncrasies of both, the tenants from the Northeast and the landlady from Delhi.

Focussing on a chaotic day when everything goes wrong, Axone brings out a moment when you smile about the one thing that has gone right that day. The film is said to be based on the director Nicholas Kharkongor's days in Delhi and when experiences are as real as it gets for the creator, the creation is bound to be as realistic.

While racial stereotyping and othering those from the Northeast has been a longstanding problem, Axone highlights the issue in mainstream cinema with a satire that is pointed and humour that is observational. The script is not didactic and the wonderful cast — including Lin Laishram, Sayani Gupta, Dolly Ahluwalia, Lanuakum Ao, Jimpa Bhutia — and brilliant direction by Kharkongor ensure that the film is racy in places, satirical, and yet delivers the punches in the right points at the right times.

With food being one of the strongest foundations of culture, Axone — the movie —is a recipe for disaster, jouissance and everything in between. Watch Axone on Netflix for the satirical and chaotic take on a very real issue that our fellow citizens face every single day in their own country. You can also read the review here.

#Northeast cuisine, #Nicholas kharkongor, #Axone, #Dailyrecco
The views and opinions expressed in this article are those of the authors and do not necessarily reflect the official policy or position of DailyO.in or the India Today Group. The writers are solely responsible for any claims arising out of the contents of this article.