‘Batla House’ evokes memories of a time when saying ‘terror’ was a huge ‘error’. It merits 3.5 stars

So, Batla House is inspired by real-life events from 2008, when Delhi was shaken by serial bomb blasts, repeated across the entire country. The Indian Mujahideen (IM) claimed discredit for the same and the Delhi police claimed to have found IM operatives, posing as students, living in a Jamia Nagar flat. An incendiary encounter between a Delhi police special team and the young men led to the killing of Inspector Mohan Chand Sharma, along with two of the suspects, in furious firing.

The case, led by ACP Sanjeev Kumar, became hugely controversial — angry questions erupted over whether ‘masoom Muslim ladke’ had been framed and killed owing simply to their religion, whether the evidence against them stood, whether this wasn’t the Delhi police, under pressure, nailing the usual suspects, whether Sharma hadn’t been killed due to departmental rivalry, whether the entire Batla House encounter was a real encounter — or a massive fake. John Abraham’s Batla House picks up this complex narrative and shakes it down to its pure core — in an age of terror, is being factually or politically correct more important?

John, as ACP Sanjay, does a great job — far from his usual suave, polished self, he looks haggard and weather-beaten, his eyes plunged either in confusion or conflict. The film’s script aids him — it has shades of Rashomon, with questions raised over every narrative posed. And the film’s ambience — swinging from violent action to a sort of grim, peaceful oppressiveness — evokes a time when calling out terror could be a huge error.

The film shows clips of politicians, from Salman Khurshid to Arvind Kejriwal, showering criticism on Delhi police, which came under a storm of censure after the Batla House encounter.

It took years of presenting evidence for the police team to finally clear its name. Batla House brings back memories of that time — of regular bomb blasts in urban India, and a strained police force operating with one hand tied behind its back — often growing taut with tension.

But not often enough.

The film’s drawback is its run-time — about 40 minutes more than needed. It deviates unnecessarily into Sanjay’s personal life, with his journalist wife Nandita (Mrunal Thakur, whose expression stays fixedly the same), losing tightness along the way. Had the film stuck to the encounter — depicted dramatically, with Ravi Kishan playing the slain inspector flaunting a sour flair — and then, the case that followed, it would gain. One of its best sequences is a tender scene between Sanjay and Nandita where he, under severe strain, finally breaks down, wondering ‘Kya main galat tha?’ — but Nandita’s lipstick changing here from crimson to pink to crimson in different shots doesn’t help. Carrying off khaki: John looks haggard and weather-beaten, his eyes plunged either in confusion or conflict. (Photo: Batla House poster)

There are terrific little moments too — ‘Look thare’, says a top cop, addressing a press conference on this ‘cuntrovershal case’, a Shivraj Patil-esque home minister huffily delivers admonition to the police team and there is a very good chase-and-mob sequence in Nizampur — in reality, Azamgarh, UP — where Sanjay catches a surviving terror op from Batla House. As they jump from terrace to terrace in the tightly packed town, you are reminded of a Bourne chase — but it all ends too soon.

Instead, there is too much of Nandita and her plasticky TV studio and too little of the hard action and tight courtroom drama Batla House needed.

In a throwback to his heartthrob days, there are some scenes of John showering, without an inch of spare flesh on his body. Batla House should have been like that — but it's flabbier and wobblier. 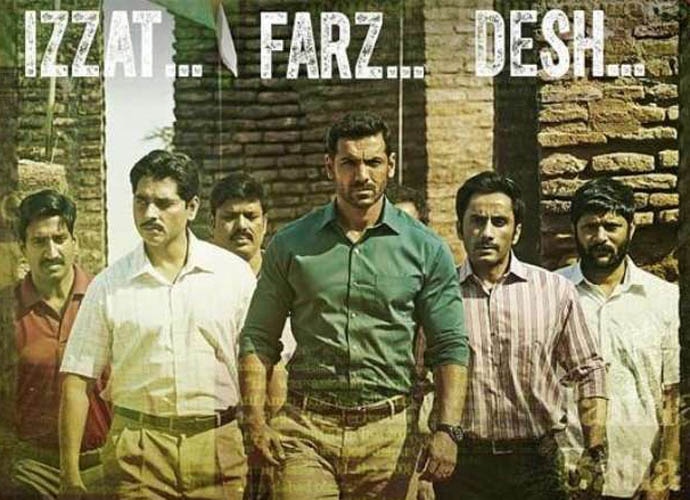 Yet, it's an engaging watch — and at the end, John ties up the loose ends with a rousing patriotic speech. Perhaps the film’s greatest strength is its strong evocation, through ambience and acting, of a time when ruthless politics was played over terrorism, the lives of ordinary Indians brutally sacrificed and the security forces relentlessly questioned.

This Batla House also highlights, quite subtly, how far we have come from that Batla House.

#John Abraham, #Movie ratings, #Movie Review, #Batla house
The views and opinions expressed in this article are those of the authors and do not necessarily reflect the official policy or position of DailyO.in or the India Today Group. The writers are solely responsible for any claims arising out of the contents of this article.