What message did Bollywood send by staying away from #MeToo march at Cannes 2018?

Only two Bollywood actresses joining the march can't be our saving grace.

On May 12, 82 women of cinema staged a powerful march on the Cannes red carpet. The march was in support of the #MeToo movement, which has shaped the narrative of the Academy Awards, Bafta, etc. However, notwithstanding the impressive number of Bollywood stars dazzling onlookers on the red carpet at Cannes every year, there has been a studied silence from our actors on this issue.

Only two Bollywood actresses — Nandita Das and Rasika Dugal from team Manto — joining the march can't be our saving grace.

Moving, historic, 82 women from all countries and professions in cinema have just made the red carpet entrance for LES FILLES DU SOLEIL (GIRLS OF THE SUN) by Eva Husson. #Cannes2018 #Competition pic.twitter.com/0YY9SNbRqg

This reluctance to take a stand comes at a time when Kangana Ranaut made her resplendent debut at Cannes; Sonam Kapoor celebrated her marriage by cutting a cake at the festival. Not to miss, Aishwarya Rai Bachchan, who was present at the festival for the 17th time, was spotted with her daughter, Aradhya. None of these powerful stars said anything about the march — not even on social media.

But, if we go by the precedent Bollywood has set, this fails to surprise us. Of late, several veteran Bollywood personalities have either tried to justify practices like the casting couch, or indulged in victim-shaming. One or two stray protests can easily be drowned out by the ongoing strong attempts to institutionalise nepotism and the casting couch.

But that the big names of Bollywood, who are otherwise vocal, maintained such a safe distance from the march in Cannes, paints a sorry picture for the future of the entertainment industry. It revealed how the actresses, some of whom have also worked in Hollywood, apparently want status quo to prevail in the industry.

A post shared by AishwaryaRaiBachchan (@aishwaryaraibachchan_arb) on May 12, 2018 at 10:15am PDT

The march was not all about #MeToo.

The march was organised by 5050 en 2020, a French movement similar to Time's Up. "While French cinema wasn't shaken by the Weinstein shock wave, it is essential that we move to take concrete action reaching beyond the issue of sexual abuse alone," reads its website.

The number of women taking part in the march was also significant. It was the exact number of female directors who have climbed the stairs of the Cannes Film Festival since its inception in 1946. "In the same period, 1,688 male directors have climbed these very same stairs. In the 71 years of this world-renowned festival, there have been 12 female heads of its juries," Cannes jury president Cate Blanchett said, leading the march.

Standing together on those stairs presented a symbol, wider than #MeToo. As Cate Blanchett said, the stairs of the industry "must be accessible to all".

"We will expect our governments to make sure that the laws of equal pay for equal work are upheld. We will demand that our workplaces are diverse and equitable so that they can best reflect the world in which we actually live," she said. 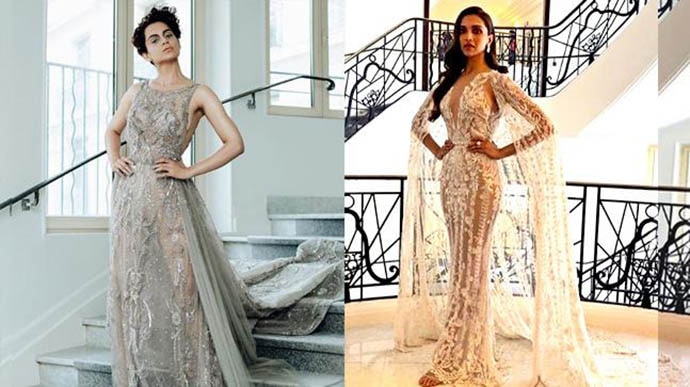 Striking a pose — and that's pretty much what Bollywood did at Cannes.

Bollywood could have been a part of this

Even if we set aside the regular complaints of nepotism and the casting couch that the bigwigs of the Bollywood industry are so keen to sweep under their glittering carpet, the industry is far from conceiving the idea of equal pay.

Similarly, Bollywood has a strangely small number of female filmmakers. The issue of women directors missing from the bigger picture was echoed during the 75th Golden Globe Awards. According to reports, presenter Natalie Portman had called out the Hollywood Foreign Press Association for failing to nominate any female directors this year - including Greta Gerwig, whose film Lady Bird won the Golden Globe for Best Picture, Comedy and Best Actress, for Saoirse Ronan.

Back home, too, the number of women directors getting acknowledged for their works is pathetic. In recent years, Zoya Akhtar, Ashwini Iyer Tiwari and Konkona Sen Sharma have been notable exceptions in a heavily male-dominated film industry.

Yet, the shared cause could not unify Bollywood and Hollywood at Cannes. What women want — And why Bollywood was not a part of this Cannes moment.

Public interest: Who's wearing what?

In 2017, not a single Indian movie could make it to Cannes.

Cannes could have been a wonderful moment for these filmmakers to both showcase their cinema and raise some of the thorniest issues of their industry and time.

But all these possibilities for India's cinema industry got eclipsed by who was wearing what.

A film festival is not a fancy-dress party. It is a bigger platform to discuss issues that are plaguing cinema industries across the world. If Bollywood actresses choose to stay away from such a crucial moment at Cannes, deciding to restrict themselves to creating ripples via their hair and gowns, their Twitter activism won't be taken very seriously any more.

Neither will they be taken seriously at the international arena.

##MeToo, #Entertainment, #Bollywood, #Cannes 2018
The views and opinions expressed in this article are those of the authors and do not necessarily reflect the official policy or position of DailyO.in or the India Today Group. The writers are solely responsible for any claims arising out of the contents of this article.