Daily Recco, May 7: A message from Tagore

We bring you Rabindranath Tagore's most famous poem, Chitto Jetha Bhay Shunyo, on the day that is also his birthday, but not a day Bengal celebrates.

Let us make it clear at the onset — today is NOT Rabindra Jayanti. Bengal celebrates it on the 25th day of the Bengali month of Boishakh. That day falls on May 9 this year. However, since the whole world — from MEA Dr S Jaishankar, the Nobel Foundation and even the Ministry of Education — is celebrating it today, and they are not wrong, by the way, we thought why not join the party and share some gyaan by Gurudev with you. You can get some more gyaan on why the confusion between May 7 and May 9 here.

We're celebrating the birthday of a true great: Rabindranath Tagore, who was born #OnThisDay in 1861 in Calcutta, India. The first non-European Literature Laureate, he was awarded the #NobelPrize "because of his profoundly sensitive, fresh and beautiful verse..."#Tagore160 pic.twitter.com/6iYHlV3OuC

Rabindranath Tagore Ji was a literary genius and a Nobel Laureate who gifted the country with its national anthem and much more.Celebrating the 160th birth anniversary of Gurudev Ji today.Because some figures live forever!#rabindranathtagorejayanti #RabindranathTagore pic.twitter.com/kcdmsEwcim

One of his most famous poems is Chitto Jetha Bhay Shunyo, first published in 1910. It is the 35th poem of Gitanjali — a collection of his poems. Tagore himself translated it, and published it in 1912 in Gitanjali and titled it: Where the mind is without fear. Ring a bell? It should, if you have had even the remotest inclination towards literature — this is considered to be one of Tagore's most anthologised verses.

A simple prayer for his country and countrymen, Tagore wrote the poem long before India's Independence. However, it defies the boundaries of time and age, and is still relevant today. We bring you, both — the original and the translated versions. Read on: 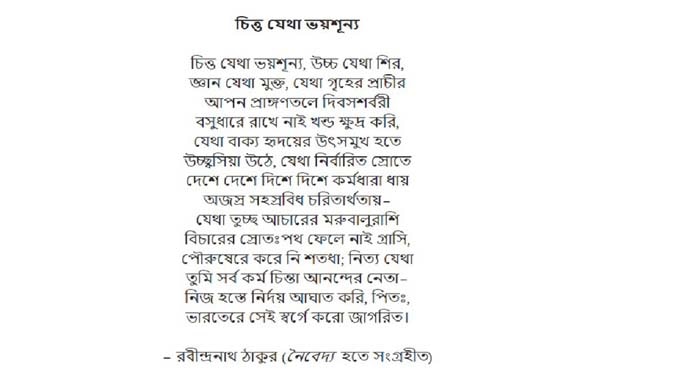 Where the mind is without fear and the head is held high;

Where knowledge is free;

Where the world has not been broken up into fragments by narrow domestic walls;

Where words come out from the depth of truth;

Where tireless striving stretches its arms towards perfection;

Where the clear stream of reason has not lost its way into the dreary desert sand of dead habit;

Into that heaven of freedom, my Father, let my country awake.

Amidst the turbulent times we live in — the Covid crisis, failing governments, an age of communalism and one where humanity has become scarce — we offer the same prayer. Into the heaven of freedom from all malice, my Father, let my country awake.

#Rabindranath Tagore, #Where the mind is without fear, #Chitto jetha bhay shunyo, #Dailyrecco
The views and opinions expressed in this article are those of the authors and do not necessarily reflect the official policy or position of DailyO.in or the India Today Group. The writers are solely responsible for any claims arising out of the contents of this article.