Why shouldn’t Ranveer Singh wear a lehenga at his wedding? Lessons more men need to learn from him

Will you be as shocked if Deepika Padukone wears a suit at her reception?

Actors Deepika Padukone and Ranveer Singh announced their much-awaited wedding a few days ago. Naturally, everyone got really excited. Their friends and family, yes, but mostly people on the internet.

For that entire day, the news of their wedding trended across all social media platforms known to humankind, at least in India. Among the many topics discussed, who’s going to wear what on that auspicious day of course topped the list. What he wears is confidence: Ranveer Singh is not exactly a stranger to lehengas. (Photo: India Today)

Now, I’m no sartorial expert, but Singh really puts on clothes which I have seen no mainstream Hindi film hero put on before, and waltzes around public platforms with the same air of confidence with which I walk around in my boxer shorts strictly on my terrace.

But from the moment the news of their marriage broke, social media was flooded with jokes about what his choice of attire would be on the big day, and how Deepika and he might end up fighting for the same lehenga. I immediately googled and actually found photographs of Ranveer Singh donning the lehenga, and — as they say on the internet today— he slayed.

One can argue that this is simply a take on his —for lack of a better word—unconventional sense of style.

But there’s something more deep-seated at work here.

Imagine a scenario where both Deepika and Ranveer turn up at their wedding reception in tuxedos. I doubt anybody would crack a joke about how she stole it from his wardrobe —because a successful woman in a suit is a norm in our subconscious minds.

However, the opposite is an anomaly.

Because a man in clothes traditionally worn by women is challenging the very notion of masculinity that most of us have been conditioned to believe for years. Sir and his skirts: On different occasions, Ranveer has been known to wear this smart black skirt... ...this 'how to do pinstripes right' manual, 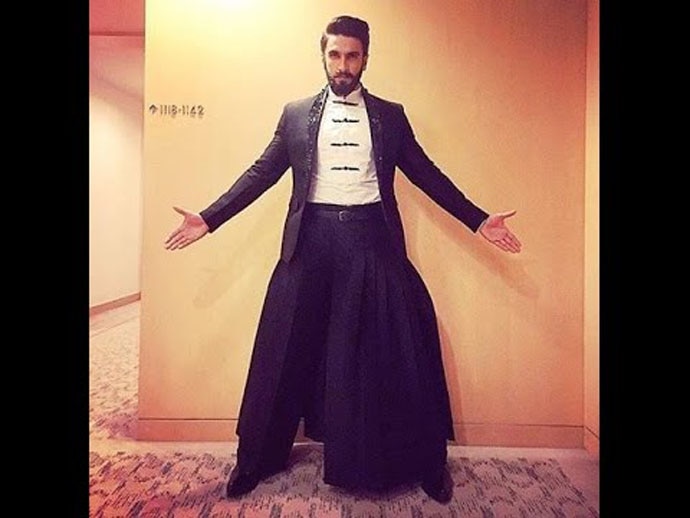 this possibly a palazzo, and this cross between a towel and a lungi. (Photos: Twitter/India Today)

Now, none of us are born with these belief systems. Left alone in a jungle, a kid may grow up to be the feral child Mowgli, while a thirteen-year-old girl forced to hide in an attic from the Nazis in 1940s Germany could turn into the world’s most famous diarist of all time. We are all organisms shaped by our surroundings, and thus, masculinity, too, is nothing but a social construct. The Oxford Dictionary defines ‘masculinity’ as ‘qualities or attributes regarded as characteristic of men’.

But what this definition doesn’t say is how all these attributes are assigned to a man by his parents, his family, his friends and the society at large in which he is raised.

As toddlers, our toys are separated — the dolls go to the girl child while the cars and guns come to the boys.

A little older and in school, we learn to differentiate between ‘us’ and the ‘other’ by looking at our school uniforms: skirts and salwars for girls (in India) and pants for boys — the same colour scheme for all giving a sense of homogeneity, but at the same time, ‘othering’ one half.

In college, Indian men must abuse after every breath they take to belong to a group, follow and talk some sport, definitely learn to smoke and drink, and take on physical fights with other men or groups of men, who behave in the same manner.

Anything else, and you are clubbed under 'wimpy', 'sissy', 'geek' or some other category. But certainly not a 'mard' — never 'masculine'.

In our films, our heroes either chase the girl until she 'agrees' and then defend her ‘honour’ by taking on the big bad world, or become an insignificant and less manly sidekick in the narrative. This is a never-ending chain. Not exactly 'uniform': Schools drill into us the difference between 'clothes for girls' and 'clothes for boys'. (Photo: PTI/file)

‘Toxic masculinity’ is a term which came into use during the rise of the Mythopoetic Men’s movement — 'a term used to describe organised group self-help activities for men undertaken by various organisations in the United States from the early 1980s through the 1990s’, according to Wikipedia, apparently to bolster male bonding as a response to second-wave feminism.

The term is in fairly common use now, especially since the #MeToo storm hit the modern world, bringing in some necessary and long-due cultural and behavioural shifts in our society.

And it’s the excess of this male hegemony among males, operating in packs that forces men to revel in the only way of living which they have learned, ridiculing everything else that comes their way.

This is why every time a Ranveer Singh appears before us in a form which we fail to completely understand, we mock, ridicule and abuse him, because we are unable to fit him into any of the hundreds and thousands of boxes we have been carrying around in our heads since the day we were born.

This is exactly why we, and I mean both men and women, need to take a lesson or two from him on how to remain secure in one’s masculinity without equating it with appearances.

Plus, honestly, these jokes have become stale, lazy and plain boring. If we all keep following the same 'rules', we'll turn into mirror images of each other. (Photo for representation: Reuters)

A younger cousin of mine, who is in his late teens now, often posts pictures of himself in baggy clothes and rosaries, part of his hair was once dyed blonde, he flaunts his ear studs and black nail polish and his strange tattoos. The only thing more or less common in all these photographs is the awkward smile on his face. He is derided, called names — sometimes, by his own family members — all in jest. It’s his ‘strangeness’, perhaps, which they find odd. One cannot simply blame them, because their middle-class Bengali upbringing hasn’t ever made them encounter a reality like my nineteen-year-old ‘strange’ cousin.

But it’s this ‘strangeness’ that we need to acknowledge and celebrate in order to not make him feel like an alien in his own home. Or among his friends, peers and colleagues.

Otherwise, we shall all become splitting images of each other one day. And then, too, perhaps, photographs of my nineteen-year-old nervous and gawky boy will keep popping up every now and then on my timeline, but that familiar smile on his face would gradually fade away.