Two books and two Delhis — one intimate, another intimidating

Two very diverse Delhis find their way into book shelves this season, with humour and sarcasm. Koi Good News? by Zarreen Khan (HarperCollins) explores a young middle class couple and their adventures with pregnancy. This is the Delhi that is aspirational and hopeful, obsessed with keeping up appearances and pushed into marking milestones. So there is the couple Mona and Ramit Deol, her mother Mom and his mother Mummy, a neighbour Laila Haider who likes to do yoga in the tiniest workout clothes possible, a doctor who is as glamorous as she is young and as she is Muslim (which bothers the family no end and embarrasses Mona because she practises at the Tits and Tots hospital), and an extended family that is not so much a family tree as a family forest — "...this Sooraj Barjatya consortium. Sixteen first cousins. Twenty-two second cousins. God knows how many thirds. And that’s only on the paternal side. Everyone we meet on the Amritsar streets is somehow related to us. Bua’s husband’s cousin’s son. Maasi’s daughter’s husband’s brother. Cousin’s mother-in-law’s sister’s husband. They don’t have a family tree. They have a family forest.''

Naturally they have a deep and abiding interest in Mona's love life and why even four years after marriage it is not yielding a prized heir. Hints are dropped, especially during family get-togethers. A young relative who has just popped is eager for Mona to have a baby so her child can have playmate; an aunt runs her hand over Mona's paunch mistaking it for a baby, and yet another refers to her as Kavita's bahu who doesn't have children yet. There are weddings, baby showers, guest takeovers, a sister who moves seamlessly between ashram life, fashion design courses and flirting with the husband's male colleagues, and a husband who spends most of his time communing with his phone. In between there is lots of advice from different quarters. From the mothers: don't listen to doctors, listen to your mother. From her equally pregnant friend Laila, listen to Beethoven and read Pride and Prejudice to the baby (our heroine would rather read Cosmopolitan and listen to DJ Suketu). And from the very fashionable neighbour, the impressively named Tina Tej Mushran, on how to never eat on these domestic flights, even when travelling business.

As she says: "I eat at the lounge. We’re platinum card holders." 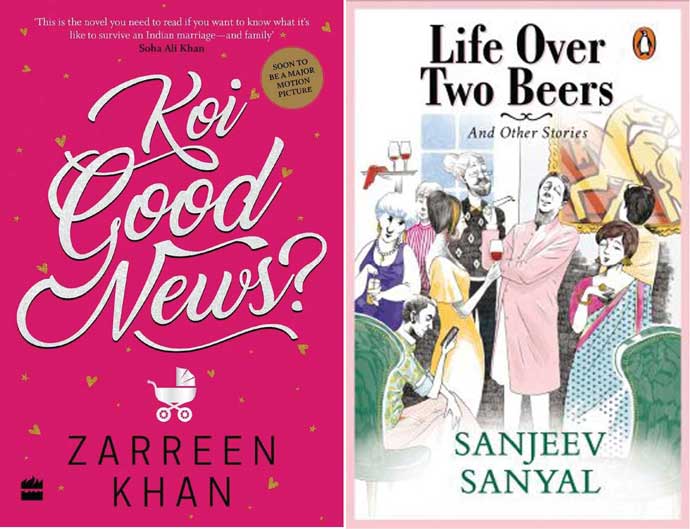 The cast of characters getting ready to welcome the Baby Deol (not to be confused with Bobby Deol) is as formidable as the snacks their bhindi-making cook Lakshmi suddenly offers to fashionable guests. Mothers, aunts, grandmothers, friends, a sister, all wanting to know whether Mona is puking (if not why not?), feeling faint (if not why not?) and regulating her weight gain (if not why not?). From a baby that kicks like he is Bruce Lee (or is a tiny girl with a big foot) to horror stories of women shitting on the labour table while pushing (that really is too much information) this is the perfect feel good quickie in these Veere di Wedding times when full disclosure is the only disclosure.

Written in two and then baby-makes-three different voices, the book is charming. Zarreen Khan is a fine new voice in a world where women are increasingly acquiring the confidence to tell their own stories, however domestic and intimate they may be.

The second book, Sanjeev Sanyal's Life over Two Beers and Other Stories (Penguin Random House), reflects a more complicated Delhi. If Khan's Delhi is warm and cosy (if a trifle chaotic), Sanyal's is intimidating, unless you're an insider or are known to an insider. But Life Over Two Beers shows how easy it can be to get access, even if you didn't go to the same school and same college and don't have the privilege of calling everyone's mum and dad uncle and aunty.

So there is the Saharanpur boy who becomes a used car salesman in small town England only to lose that job to outsourcing in Bangalore — and return to India as the caretaker of a rich cousin's home and gallery only to morph into a television talking head and literary festival grandee. There is the former banker from Singapore who loses his job only to find himself a girlfriend on a trip to Ladakh. Said girlfriend works in an NGO that just happens to fudge figures for foreign funding, something that Sanyal's writing suggests slyly is a common occurrence.

There is the bureaucrat who has been stuck in a committee to take stock of the organising committee of 1982 Asian Games, which has been in existence for more than three decades. This is the Delhi of the golden triangle of India International Centre, Khan Market and Taj Mansingh; of Faqir Chand and Bahrisons, of carefully handwoven FabIndia clothes and of privileged types complaining of Delhi being taken over by the "riff raff mofussil people".

Sanyal writes of the "clubby familiarity between people who tear into each other in newspaper op-eds and TV debates" and of the three keys to surviving the capital: a good cook, a good driver and Mussoorie.

This is Sanyal's first work of fiction and one looks forward to what one hopes will be a Delhi novel that cuts through the smoke and mirrors politics of the city — with its entrenched divas with big bindis and kohl-rimmed eyes who sanction inclusion, its NRI academics who visit like Siberian cranes, its self-styled cultural arbiters who know their Monets and Manets, and its many networks — the network of chummy bosses being mirrored by the network of the underclass of drivers and cooks.

For anyone looking for a way into Delhi society, Sanyal's Life Over Two Beers is a quick guide to unlocking several doors.