Enter the Anthropocene: ‘Climate change is political, so should be art around it’

Artist Vibha Galhotra talks about her gender and her art

It’s an upstairs room in a Delhi housing society — one of those where the view from the window is cut short by smog. On the table is a book, Žižek's Jokes: (Did You Hear the One about Hegel and Negation?), which she found on her trip to Germany.

The small book is a collection of “published jokes” by the contemporary Slovenian philosopher Slavoj Zizek.

“In an old joke from the defunct German Democratic Republic, a German worker gets a job in Siberia. Aware of how all mail will be read by censors, he tells his friends: ‘Let’s establish a code: if a letter you get from me is written in ordinary blue ink, it is true; if it is written in red ink, it is false.’ After a month, his friends get the first letter, written in blue ink. ‘Everything is wonderful here: stores are full, food is abundant, apartments are large and properly heated, movie theaters show films from the West, there are many beautiful girls ready for an affair — the only thing unavailable is red ink.’”

“And is this not our situation till now? We have all the freedom one wants — the only thing missing is ‘red ink’. We ‘feel free’ because we lack the very language to articulate our unfreedom... The task today is to give the protesters red ink,” Zizek writes in the commentary. 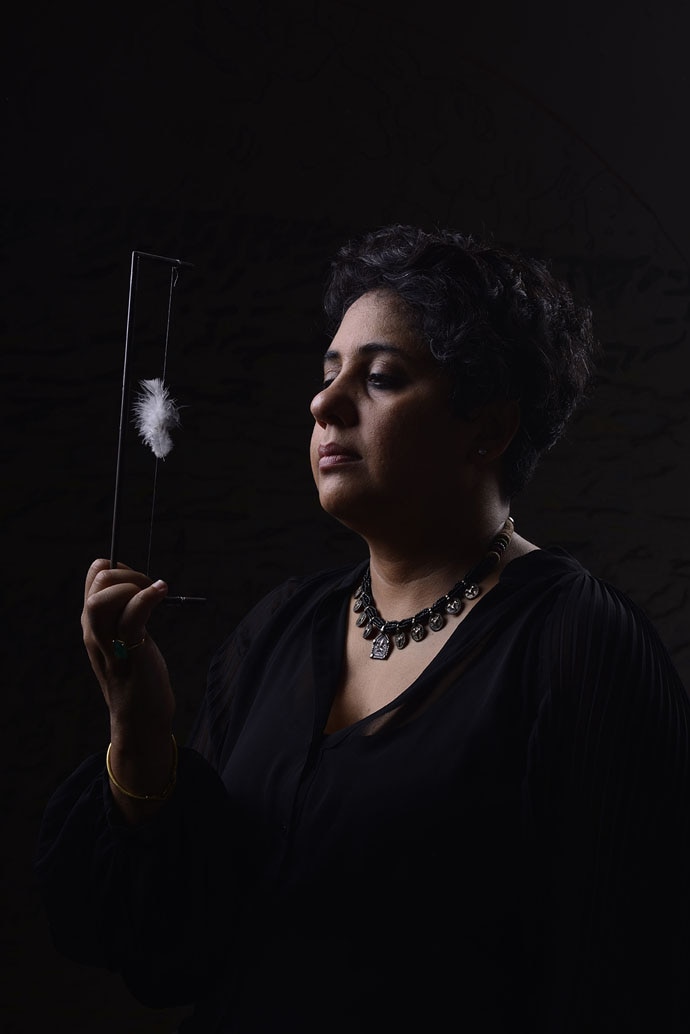 Vibha Galhotra grapples with the questions of origin, climate change and the purpose of art as a healing mechanism. (Photo: Yasir Iqbal)

The book being there is not a co-incidence.

Artists know where to look for truth.

And more than anything, the metaphor of the unavailable red ink is what characterises the work of this important artist.

At first, she denies the gender question.

“Gender doesn’t matter,” she says. “My work is non-gender.”

But Vibha Galhotra, a New Delhi-based conceptual artist, says her large-scale sculptures are often referred to as “very manly”. The denial, then, becomes a complex case of artists who are women trying to free themselves of gendered tags, and become more abstract.

In the era of MeToo, Galhotra’s work is distinctly political. She grapples with questions of origin, climate change and the purpose of art as a healing mechanism.

While endless debates on women’s status in society go on, the Indian art world has been witnessing its own revolution — in terms of women artists who are using the “feminist aesthetic” to explore their social responsibility, and finding vocabulary that is both political and personal.

This year, the Kunstmuseum Wolfsburg in Germany curated an exhibition called “Facing India” that featured six women artists from India. It explored the past, present and the future from the female perspective. Galhotra was one of the participating artists.

As she delves into the question of colonial politics for her upcoming work — to be showcased at the Lalit Kala Akedemi in Chandigarh and the Jack Shainman Gallery in New York the next year — she says she picked up the threads from the research of various space agencies, especially NASA’s work since 2012 to find water beyond earth. She talks of the politics of wealth, and how the poor suffer the most because the rich can always go to other planets. It is a joke — but a cruel one.

Go around Delhi and the poor are huddled under flyovers inhaling toxic air, while the wealthy breathe purified air.

“The eccentric tech big-shot Elon Musk, the CEO of SpaceX, decides to give an option of living on another planet with the proposal of making life multi-planetary. He is selling one-way tickets to Mars,” she says. “This is how we go about conquering. The question of environment is political, as claims to inhabit another planet — in this case, Mars by 2024 — with Musk’s proposal for a ‘spacefaring civilization, with a multi-planetary species’ only hints at a new, scary form of colonisation.”

And, like the legendary artist Joseph Beuys, she uses absurdism and tools of deconstruction and reconstruction to question the utopian idea of Mars being turned into a self-sustaining human colony to escape the crisis on earth. Galhotra’s work has been described as 'too manly' — showing how tightly an artist's gender gets tied to art. (Photo: Vibha Galhotra/Facebook)

I ask her what she sees outside her window in the city.

“Smog and advertised fears,” she says.

It wasn’t always that she wanted to be an artist — but then, she says, you grow up and try to find meaning. That’s how she thought her work could make the environment its focal point. That’s how a restructuring of her social and political beliefs took place.

Climate change is a political thing, a collateral damage of capitalist ideas, she says. Perhaps this is why we have a city enveloped in smog. It is like walking in Gotham City, where the sky doesn’t meet the eye.

That’s why we have a black river foaming at its mouth. That’s we are dying every day.

Her work is an exploration of the state of urban development in India and stems from the fact that she was an “unhealthy child” and felt weak in Delhi, where she came from Chandigarh to practise as an artist.

At the level of art, she says, there is a disproportionately low representation of women.

“There is scarcely any written or visual archive or any form of documentation on the works and lives of women artists from the past. The representation of women artists in museum spaces would be limited to about a meagre five per cent. Even within the realm of galleries, the limited numbers of buyers for art created by women further excludes them from gallery representation. Women, as artists, have to constantly compete for space in the world of art — to display, to sell, to prove their worth at every step,” she says.

Her earlier work was about migration and Metropia — the word she invented to express her situation as a migrant trying to find utopia.

In 2010, when she was invited by NGO Sweccha and Khoj, a Delhi-based art organisation, to participate in their Greenathon project, she became interested in environmental damage in the urban area.

Post-that event, she ended up working on a project, Sediment. Another untitled one was around the Yamuna, where she documented the river for two years by traversing it in a boat, taking pictures. It was on a Sunday there that she saw a family doing an ancestral pooja at the ghat. In all the muck and dirt, the family was trying to take a bath. She tried to stop them — only to be scolded for wearing shoes on the banks of a holy river — and ‘how dare she call it dirty’?

“I was standing in this absurd theatrical space suspended between belief and reality,” she says.

That’s when she decided to get canvases and start painting with the filth.

It was also a performance where she took one canvas every day and later froze the kichar on them with the help of resin. “That body of work changed my practice,” she says.

Galhotra’s work raises the question whether art can become more relevant as we face the destruction of ecology, and is a critical take on the social, economic and political implications of climate change.

Her work could be defined as entering an Anthropocene, where one is faced with the damage one has wrought upon the environment.

Galhotra received her bachelor’s degree in graphics from the Government College of Arts, Chandigarh in 1999, and her master’s from Kala Bhavan, Santiniketan, in 2001. Chandigarh, she says, is a ‘nowhere place’, where she was at a loss to find her footing as an artist. Shantiniketan freed her, she says. In her 365 days, she maintained a daily diary of events, thoughts, behaviours, emotions, philosophies and actions. She made works to reflect her own observations that could be the framework of Theatre of the Absurd.

It is this theatre of the absurd that characterises her experience of being an artist.

And while the concerns are not gendered, the approach is.

“I look at the environment with a motherly concern. And of course you have felt the gender bias. You know it stops you from many things, but you break the wheel,” she says.

Galhotra is also working on her dream project, titled ‘Food For Thought’. It revolves around the theme of 'panchabhuta' or the five elements (water, air, fire, air and ether). She has been working on it for almost 30 months now. It is a public participatory performance, including photographic content, video, research and installation, designed to question issues around ecology, economy, politics, and behavior.

The project is inspired by Judy Chicago’s The Dinner Party and Rirkrit Tiravanija’s Untitled (Free/Still). Her latest is Judy Chicago’s The Dinner Party. (Photo: http://www.judychicago.com/gallery/the-dinner-party/dp-artwork/)

“Don’t you feel that you are living in a plastic and unrealistic socio-political environment?,” she says.

That’s why, like Zizek, she thinks political correctness gets in the way of things. And perhaps that’s how the future of art should be — honest and political.

“This is an emergency and if my work can contribute in any way in correcting the way we see or relate to the environment, it would be my way of giving back,” she says.

From her terrace, the city looks hazy. Visibility is low. This is how you enter the Anthropocene. You stumble through it, coughing while your eyes burn. She looks up at the sky and shrugs.

No stars shine here, she says.

And as she traverses the patriarchal world, her art becomes more pronounced. In her last work that she showcased at an art gallery as part of a group exhibition in Gurugram in December, she cast her own silhouette in bronze, facing a mountain. The inspiration came from Maya Angelou’s Still I Rise. 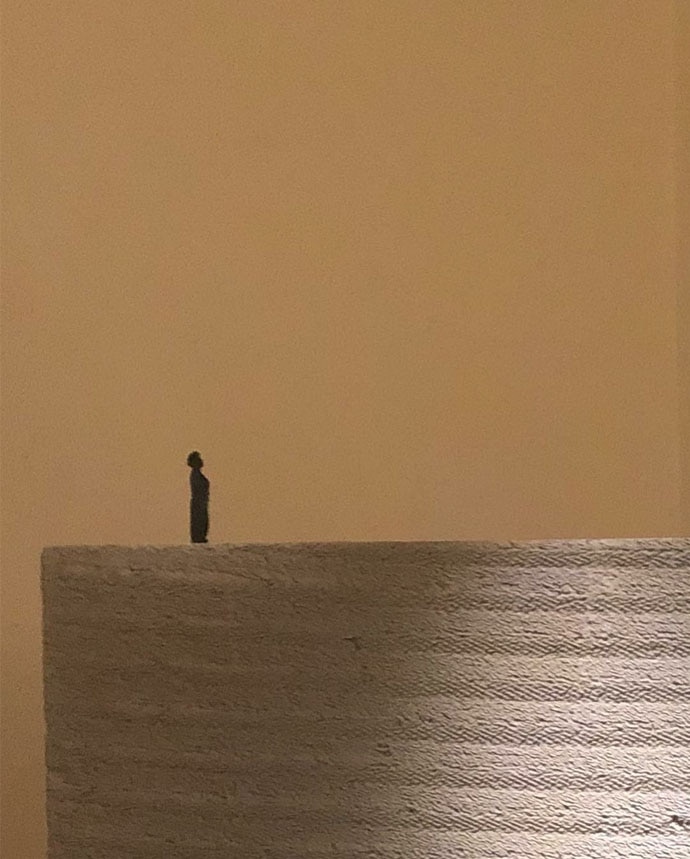 In her last work, she cast her own silhouette in bronze, facing a mountain. (Photo: Vibha Galhotra/Facebook)

Welling and swelling I bear in the tide,” she recites.

And then, she says she knows she likes endlessness, uninterrupted views from where she stands.

“I want to dance to the songs of freedom. I want to smash the mountains with my gaze. I want to say to everyone I am armed with the courage of a woman who has taken up the hammer and the chisel. I can bury the thousand unfreedoms and grow flowers on the ashes,” Galhotra says.

And the gray of her world suddenly seems not composed of bleakness, but of hope and courage.