The ongoing exhibition in Delhi traces the roots of the Indo-French symbiotic relationship from 1750 to 1850.

The paintings, manuscripts, artefacts and displays show how the presence of the French has significantly impacted the power balances in the subcontinent even as far back as the 17th and 18th century. 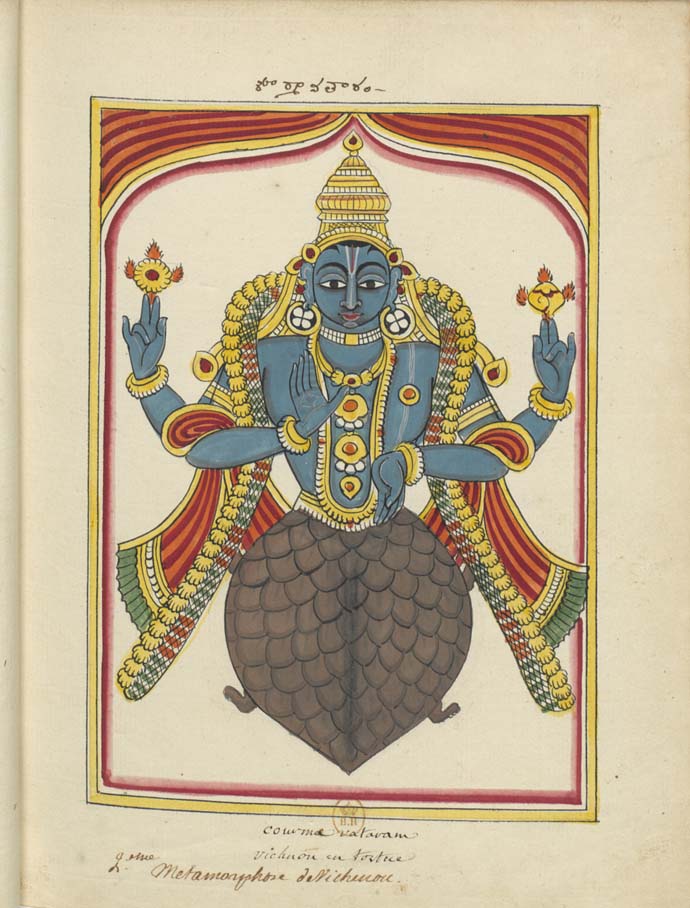 A picture of the Tanjore painting representing an Indian deity commissioned by French administrators on display at the ongoing exhibition. (Photo: Alliance Francaise)

The deep French influence on India is not an aspect the average Indian is aware of.

In the 17th century, the French East India Company established trading posts at Pondicherry, Chandernagore, Mahé, Karaikal and Yanam.  In the Indian sub-continent, France was the dominant colonial power between the 17th and the 18th century.

However, following the 1763 Paris Treaty, French power in India declined, restraining the French presence in India to five settlements. These were returned to India in 1962 under Delhi Treaty of 1954. Today, Pondicherry is the most visible historical heritage of that legacy and is an important French cultural and academic centre till date.

The suppression of French influence in India was inevitable with the adoption of the British method of administration and education. A significant English domination of Indian thought and practices is still prevalent despite several years of Independence.

In fact, India still makes a significant contribution to maintenance of the British Commonwealth War Graves, even though the contribution of Indian soldiers was muted till very recently. The French, more than the British, are responsible for modernising the Indian forces. This can be evidenced by the performance in the interstate wars in the colonial era.

Both the countries have had deep relations with mutual influences and dependencies that go back nearly 300 years.

The exhibition shows aspects of history commonly unknown that go beyond the stories of the colonisation. Many French intellectuals such as Michelet, Cuvier, Anquetil-Duperon, Burnouff, Renan and Taine among many others recognised the richness of Indian culture and philosophy and brought it to the western audiences.

Fascinated by India and "Indian exoticism", there was an eagerness to learn oriental languages. The first school of oriental languages was established in Paris in 1795, with a chair in Sanskrit in 1812 at the College de France, Paris. Even today, one of the largest collections of Indian manuscripts and artefacts outside India is with the Bibliothèque nationale de France and in private collections.

Both countries share similar orientations in foreign policy that is realist and not confined to alliances. This exhibition serves as a reminder of that rich cultural legacy that is usually not celebrated or is lost to louder Commonwealth events.

The symbiotic relationship has stood the test of time as for several years after India’s Independence, France was the preferred nation next to the Soviet Union in terms of defence purchases. More importantly, relations between the countries conspicuously defied Cold War tensions, with the French continuing to supply spare parts to Indian military, contrary to the stance of USA and UK in the sanctions period.

This exhibition, which is on till December 14 at National Museum in Delhi, is a must visit as it brings out the influence of Frenchmen with the patronage of Indian Rajas and Nawabs in developing military and strategic thought, philosophy, education, architecture, town planning, administration, cartography, and in spreading of Indian cultural thoughts and ideas to the western audiences.

#French manuscripts and paintings, #National museum, #Alliance française, #Indo-French Ties
The views and opinions expressed in this article are those of the authors and do not necessarily reflect the official policy or position of DailyO.in or the India Today Group. The writers are solely responsible for any claims arising out of the contents of this article.