Chadha's Independence is tinged by tragedy, as it was in reality, with 14 million displaced and one million dead.

"We had separate schools, separate textbooks and separate elections. You always divided and ruled. Now that you have divided us, you ask me for a solution.''

That is an angry Jawaharlal Nehru talking to Lord Mountbatten in Gurinder Chadha's Viceroy's House; which will be released as Partition 1947 in India. That's not the only scene of communal discord in Partition 1947, which has, all too sadly, echoes in contemporary India. As Mohammad Ali Jinnah's Pakistan comes to be, a country conjured out of thin air, Hindus and Muslims at every level are at each other's throats.

When Jeet, Lord Mountbatten's valet, and Aaliya, Lady Pamela's assistant, indicate they are in love, everyone is aghast. In the upstairs-downstairs world of the Viceroy's House, the servants are divided on communal lines. Outside Punjab and Bengal are burning as Chadha shows documentary footage of overcrowded trains and stacked stretchers. She also recreates the refugee camps in Delhi with people spilling over, waiting for handouts and medical aid - with communal tensions running high there too. Absurd divisions are made of the household effects in Viceroy's House - the tuba will go to India and the French horn to Pakistan.

Mahatma Gandhi wants Jinnah to be first prime minister of India. Nehru will have none of it, saying even if they agree to it, he will be voted out by the majority in the first General Election. Sardar Patel pipes up in a surprising falsetto: Let him take his Pakistan, he will come begging to us in five years. Jinnah himself is intransigent, saying he has no wish for Muslims to live as "Negros" did in America, as second class citizens. He also promises, which he later reiterated in his Independence Day speech, freedom of faith to people of all religions in the new Pakistan.

No one, with the exception of the Mahatma, comes off looking good. Nehru is passionate, articulate and affectionate (he embraces a man who slaps him angrily in the refugee camp) but he is also firm on not giving Jinnah an inch. Jinnah is shown as a man obsessed with his vision of Pakistan--but in remarkably good health for one who was dying of cancer.

"Sometimes surgery can save the patient,'' he says to those who disagree with his idea of a separate Pakistan. Patel's cameo is almost comic. Mountbatten, who starts the film as a hero, the Great Liberator, ends as a patsy, a pawn to Lord Wavell's secret War Cabinet plan to divide India. Lord Ismay, giving the document to Sir Cyril Radcliffe, says "We didn't defeat the Nazis and the Japs to give away the shop to the Soviets."

Chadha relies on the revelations in the controversial The Shadow of the Great Game: The Untold Story of India's Partition by Narendra Singh Sarila, who was ADC to Mountbatten. 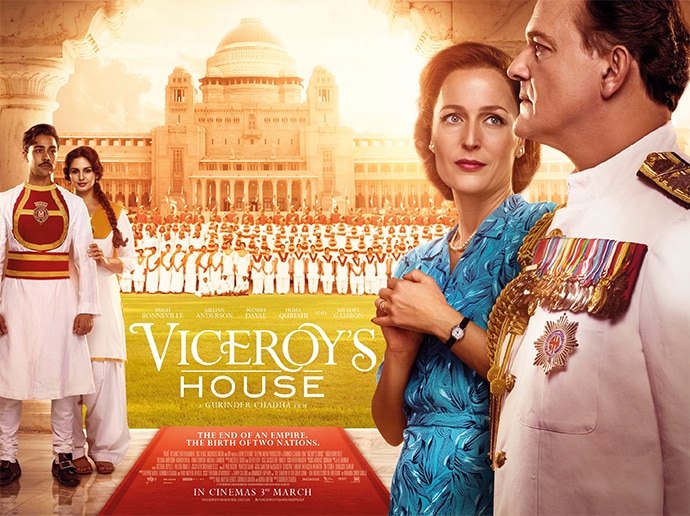 Chadha's Independence is tinged by tragedy, as it was in reality, with 14 million displaced and one million dead. Her grandmother was one of the survivors and Chadha has done that generation a great honour. Her characters may be drawn in broad brushstrokes, and our leaders often portrayed as self serving and intractable, but 70 years on, she has at least reopened the debate on what kind of nation we inherited and what kind of people we have become?

Have we really travelled so very far from the days of savagery and loot? Or were these latent hatreds just simmering beneath the surface waiting to boil over? Recent events in India have shown how much we still have to exorcise. India is her people. "Our spirit can never be broken,'' says Nehru who had a talent for fine words.

"India is what we will make it." Indeed, what have we made of it? Churchill saying "we cannot leave 400 million primitive Indians to their fate" may be galling, but perhaps it is time to note what we did wrong and what we got right.

There are suggestions throughout the movie that India was once a rich nation - indeed Edwina Mountbatten says at one point the grandeur of the Viceroy's House makes Buckingham Palace look like a bungalow and both she and daughter Pamela eat the chicken meant for the dog because they haven't seen food like that since before the war.

Edwina, ever the activist, is aghast that her husband is interested only in politics and not in rectifying the wretched state of literacy and infant mortality, the "legacy of the British in India". England, says a valet, is all slums and bomb sites. India, on the other hand, especially the Viceroy's House, serves food as good as the Claridges.

Freedom, as the Mahatma says, though longed for is a fearful thing. With fear comes violence, it is contagious. Courage is even more contagious, says the Mahatma. It's a message that India needs to heed now more than ever.

Post your comment
#Indian Independence, #Partition, #Lord Mountbatten, #Gurinder Chadha
The views and opinions expressed in this article are those of the authors and do not necessarily reflect the official policy or position of DailyO.in or the India Today Group. The writers are solely responsible for any claims arising out of the contents of this article.