Crassness with Karan: No, Hardik Pandya is not the first time. Karan Johar's show is often rude and crude

From Ranveer Singh asking if Anushka wanted her ass pinched to Karan Johar saying single women had to resort to sucking thumbs, 'Koffee with Karan' has frequently disguised the disgusting under Bollywood glitz.

The Hardik Pandya-KL Rahul video, with the cricketers spouting whatever was in their minds, is now off the Internet.

But everyone has suddenly woken up — and an old video of our ‘dream man’ of 2018, Ranveer Singh, reportedly making nasty hints to Anushka Sharma sitting on the same couch (not literally) in 2011 is all over Twitter now. Ranveer has of course swiftly apologised as well but the words themselves ring out louder in the current context.

"You want your ass pinched? I'm right here" IS THIS YOUR HERO? Also look at how Kjo is laughing. BOLLYWOOD IS FULL OF SCUMS pic.twitter.com/nZbEWiTlp8

There has been a storm over Pandya and Rahul. But, in fact, hasn’t Koffee with Karan always been like that?

What has actually changed? Not the script — the couch, maybe? (Photo: Hotstar)

Isn’t the show scripted and the participants intentionally tread on the risky line between comedy and obscenity/offence?

It's not particularly grown-up humour. But all this has always helped both the show and the stars on it in advancing their respective interests, excepting a few misfires like the Hardik Pandya episode.

But here's the question to us — when will we understand that celebs speaking rapid-fire English, pebbled with a few glam-sounding words, is not 'modernity'? What you say shows how modern — and thus, how cool — you really are, not how you say it. Will we ever appreciate that — and call out regressive junk for exactly what it is?

Until a particular line was breached, we didn't really care either.

That's why this insult to our intelligence has been going on for quite a long time!

Here are some moments from Koffee with Karan that flew under the radar:

'Is that your phone in the back pocket, because that a** is calling me.'

Oh, yes! Ranveer Singh, our current woke darling, said this on his debut appearance upon the show where he came with Arjun Kapoor. (Didn’t that sound wrong? But it's so Koffee with you know who!). 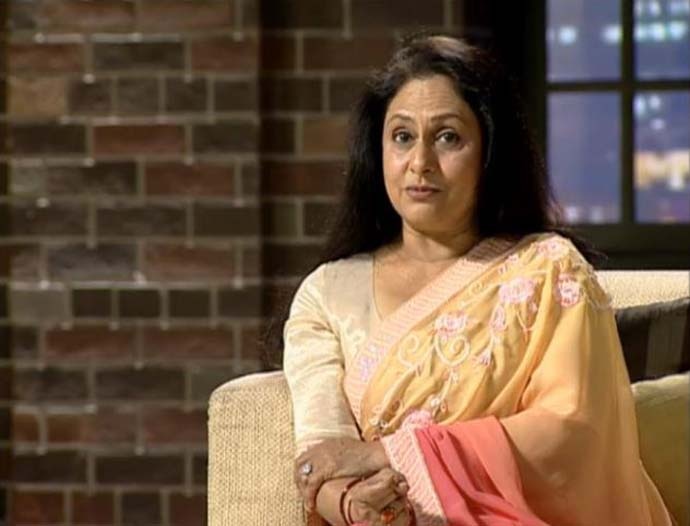 What makes Aishwarya so special? Oh, she never pushes herself. (Photo: Hotstar)

2. Do you think Aishwarya is the ideal 'Mrs Abhishek Bachchan'?

Karan Johar, who gifted us Lust Stories, once asked this to Jaya Bachchan who was telling the whole world how much she liked Aishwarya.

“When we are all together I have never seen her push herself,” Jaya Bachhan said.

The fact that Aishwarya apparently stands behind everyone and keeps quiet were things that made her such a nice ‘bahu’.

And we applauded such modern thinking! Which, on reflection, actually makes a Haryanvi village look cool. 3. Nargis Fakhri — such a funny name!

Of course, Karan Johar asked her how her surname had been mistaken for something else, to which the actress revealed that not only her surname, her first name in Spanish sounds like Nalgas, which means buttcheeks.

4. Because he’s a married man

Karan Johar was talking to Priyanka Chopra about her rumoured link-up with Akshay Kumar. His point to Chopra was mainly that this must have been terrific for her because he is a married man.

Really, that’s your point? How in-depth. 5. Only single girls would have to resort to things like that

This was when Rani Mukerji and Vidya Balan tried to go steamy on the couch and Vidya kissed Rani’s thumb. Then, Karan Johar, pretending to 'unsee' what he just saw, said, 'Only single girls would have to resort to things like that.'

Rate these actresses according to their sex appeal

Have you had sex in a shower/car/sarson ka khet (Anything will do. We just want to know you have had sex. Otherwise, we will observe a minute's silence for your non-existing sex life)

If this is the format of a show, then we really don't know who's to be blamed. And these are just five not-so-talked-about instances which we may find offensive today. Pick up any episode of the show though — you will find Karan making gay jokes with a 'straight' face (that's exactly a 'joke' he recently made with a twinkle in his eye), or actors fighting over 'who gets to be the man' if they are in a homosexual relationship.

Well, how many apologies are coming our way now?

Or, in fact, do we need to apologise to ourselves for having underestimated our IQs to this point?

Also Read: Hardik Pandya is not alone: His sense of crass entitlement can be seen in many stars united by foul behaviour

#Karan Johar, #Patriarchy, #Sexism, #Misogyny
The views and opinions expressed in this article are those of the authors and do not necessarily reflect the official policy or position of DailyO.in or the India Today Group. The writers are solely responsible for any claims arising out of the contents of this article.