"…. A gap was made in the wall of the fort, according to custom, and the body, having been carried out through it on the shoulders of Akbar’s son and grandson, was interred in the sepulchre at Sikandra, three miles distant, where the deceased emperor (Akbar) had begun to build his own monument.

"The members of the funeral procession were few in number. Nobody was mourning except the heir to the throne and certain other persons, who all resumed their ordinary garb at sunset. 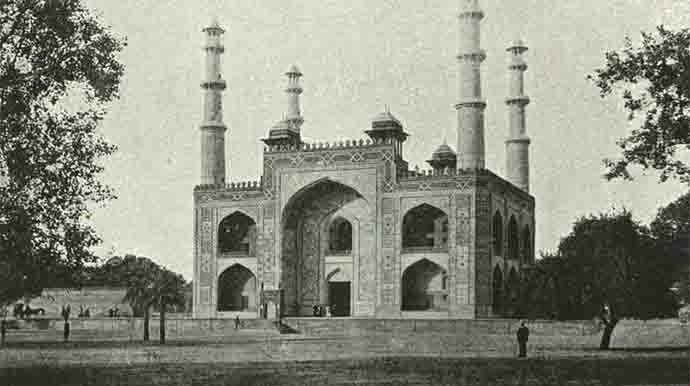 The tomb of Akbar at Sikandra. (Credit: Wikimedia Commons)

"Jahangir took much interest in rebuilding from its foundations the mausoleum at Sikandra, for which he caused fresh designs to be prepared, and he willingly expended large sums on its construction and decoration. The noble monument received high honour from Jahangir and his successors for many years.”

Aurangzeb’s policies and his era were characteristically different from his predecessors.

The Hindus, who were otherwise adjusting their daily lives with the Mughals during their early rule, were shaken with surprise when the ruler of Hindustan changed into a militant missionary of Islam.

He reverted to old and forgotten ways. The jiziya (a special tax for non-Muslims) was reimposed, temple destruction and idol desecration became prominent. “Under imperial supervision, cartloads of broken idols came in from all quarters and were buried under the staircases of the Jama mosques of Delhi and Agra,” writes historian Kalika Ranjan Qanungo.

Hindu religious fairs were abolished and public celebrations of their festivals prohibited. Under these circumstances, opposition to Islamic bigotry found expression in violent rebellions against the Mughal emperor. This open enmity by Aurangzeb unknowingly revived Hindu nationalism. Rebellions and imperial suppression were visible across the country.

Writing about the rebellions, Manucci, an Italian writer who traveled to India during the Mughal period, says, "Usually there is some rebellion of the rajah and zamindars going on in the kingdom.”

In the same circumstances rose the Jat rebellion of 1669.

Other than the obvious religious reason, it is important to note why the Jat rebellion took this nature.

With the accession of Aurangzeb, the Delhi Durbar became a narrow and over-centralised despotic regime.

Such a set-up accompanied by the narrow outlook of the ruler was naturally antagonistic to the democratic values of the Jats. Fiercely independent, these Jats respected their community laws and institutions against any kind of onslaught. 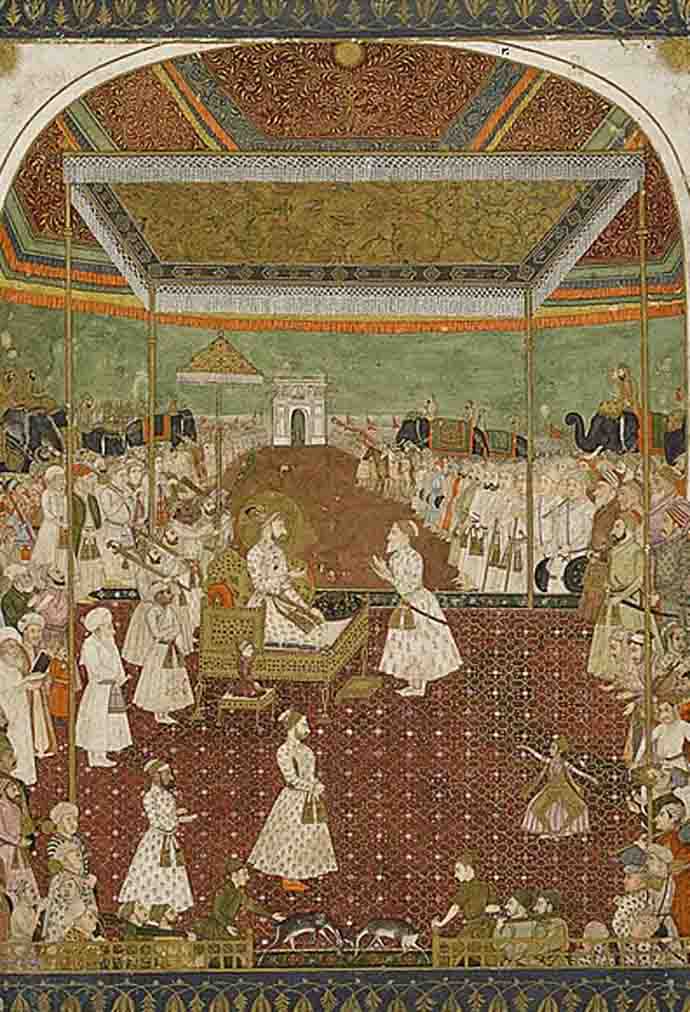 The courageous men from the community had reminiscences of their republican past and this intrusion into their customary laws and bodies was seen as an ugly intervention. So, apart from economic woes and religious factors, the Jats of the region around Delhi were filled with disenchantment for the Mughal emperor.

In the year 1669, the pent-up fury of the Jats turned into a very powerful revolt under the inspiring leadership of Gokula, the zamindar of Tilpat (in modern-day Faridabad, Haryana).

Abdun Nabi, the faujdar of Mathura, was ordered to attack them, where they had gathered at the village of Sahora (about six miles from Mathura). Although gaining early during the fight, Nabi was killed on May 12, 1669.

Following this success, Gokula ravaged the paragana and town of Sadabad (24 miles from Mathura) in the Doab. Turbulence spread further to Agra and the scale increased enough that the Durbar initiated diplomatic overtures.

After a prolonged sanguinary conflict, Gokula was arrested along with his two associates, including Sonki (Uday Singh Singhi), Gokula’s uncle. “Jats displayed their reckless courage and undaunted valour. Their punishment — cut limb by limb on the chabutra of the Kotwali (Agra). Other captives either met the fate of their leader or were put in chains," writes Girish Chandra Dwivedi, eminent historian.

Although the rebellion failed, it had considerable, though indirect, repercussions on the future course of Jat history and, in the long run, on Mughal rule itself.

The military tactics of Raja Ram and Churaman clearly indicate that the Jats had benefitted from the failure of 1669. (A change in military tactics followed and the need for working under a united leadership.)

Brij Raj and the rise of Raja Ram Jat

An uneasy calm had spread over the Jat strongholds for a short spell. Learning from Gokula's failures and weaknesses, we soon learned about the rise of Raja Ram Jat. He was the son of Bhagwat alias Bhajja Singh, the brother of Brij Raj. Brij Raj of Sinsini (16 miles of north west of Bharatpur) had rallied Jat rebels together against Multafta Khan, the faujdar of Agra.

Brij Raj was instrumental in bringing villagers together who had decided to withhold the revenue. Although he assured the Khan of cooperation on revenue demands earlier, Brij Raj gathered the villagers together and “resolved to die rather than pay revenue”.

Driven passionately by Brij Raj’s call for arms, the men fought with their lives on the tip of their swords. The villagers battled with utmost desperation and gave the Faujdar hardly a chance, who was routed. After a humiliating defeat, they set him free but Faujdar Multafat Khan succumbed to his wounds on June 26, 1681.

In 1682, a Mughal contingent pursued Brij Raj up to his stronghold, Sinsini, which was put to siege.

In the battle that pursued, he lost his life, along with his son, Bhao Singh. Sinsini then fell into the hands of the enemy. In this setting of Mughal atrocities, and a history of Jat heroism, rose Raja Ram Jat. "Raja Ram of Sinsini displayed a capacity to learn from the past and an insight into the exigencies of the present," writes Dwivedi.

Raja Ram learned from Gokula’s failures that in order to give a strong and consistent stand to the Mughals, it was important for the Jats to be equipped with proper weapons and be organised under a strong and bold leadership.

With effect, he started working on these glaring defects in the Jat clans that had built over time to counter the Mughal pressures. He fraternised with clan leaders in the region. He consistently professed the necessity of remaining disciplined and obeying the captains. He also made his forts in deep dense jungles and relied on guerrilla warfare, or what is still known commonly as 'Dhar' system. This kind of warfare reaped tremendous benefits to the Jats of the region.

Loots that led to the raid

Raja Ram started organising loots on the outskirts of Agra. The roads became dangerous for caravans and travellers. The roads between Dholpur and Delhi and Agra and Ajmer via Hindon and Bayana were practically closed for normal traffic.

It is said that no place in Mathura was deemed to be safe other than the Jama Mosque. Raja Ram would organise raids and plunder in order to blunt the emperor’s hold in this region. Despite different appointments to punish the rebels, the Mughals failed to capture any of the Jat strongholds.

At one point, the Jat leader even tried to ransack Akbar’s tomb, which was foiled by Faujdar Mir Abul Fazl. Fazl was rewarded with the title of Iltifat Khan and his Mansab was increased by 200 Sawars.

Raja Ram retired to Ratanpur after gathering a rich booty.

Who would have guessed that only sometime later, Raja Ram would raid the tomb again, stripping it of all its glory. The problem became so huge that the Delhi emperor ordered his son, Muhammad Azam, to proceed against the Jats. He was, however, recalled to assume supreme command in Golconda. Raja Ram killed Commander Aghar Khan, who was en route from Kabul to Bijapur, which was a huge boost for Raja Ram's rebels.

In 1668, however, it was Mahabat Khan who was mildly successful in resisting Raja Ram. Khan was encamped near Sikandra when the rebels raided it. A fierce fight followed and Raja Ram was driven back after losing about 400 of his men.

Raja Ram after a while reappeared at Sikandra.

He had been fairly successful in asserting his position in the region. Having strategically outplayed the Mughals, Raja Ram had established himself as a leader that other regional rulers sought support from. Shaista Khan was appointed Governor of Agra. But the new Governor-designate was running late. Raja Ram took advantage of this delay and with his men, ransacked Akbar’s mausoleum.

He plundered the large tomb and took away precious articles. They carried away gold and silver, carpets, lamps, etc., and destroyed whatever they couldn’t. Manucci describes the courage and fury of these men in the following words: "The villagers broke the gates and tore away the ornaments of gold, silver, and other precious statues.”

Their actions grew more shocking. According to Manucci, the villagers apparently even desecrated the emperor's remains.

It is the sheer rawness of that act that stirs the soul. Babur’s remains were taken from his temporary grave and shifted to Kabul. So was Humayun’s body which was exhumed and taken to Kalanur, Punjab. But the alleged ransacking of Akbar’s tomb was an act of utmost rebellion. Attacking the dead emperor's remains was an act of deep disrespect to the departed soul. Throwing relics, as has been written of earlier, reportedly into a fire was a clear sign of Hindu rebellion against Mughal oppression. This was not just a rebellion against Aurangzeb, this was a blow to the intrusion of Mughal rule into Hindu and Jat customs.

It struck the ideological core of Aurangzeb’s religious policy.

As expected, he was very hurt when he learnt about it. He punished the Faujdar — but Raja Ram continued with his rebellion against the Mughals.

During a fierce fight sometime later, Raja Ram was killed by a Mughal musketeer who was hiding in a tree. The story of his rebellions, however, remained fresh. As Vincent Smith writes, ”The pilgrim to Akbar’s tomb visits, although he does not know it, an empty grave.”

Also read: What makes Akbar 'great' and not Maharana Pratap