Fans are up in arms over the singer's claims that she is reviving the great Bhikhari Thakur’s art.

December 18 was the 130th birth anniversary of Bhikhari Thakur, the "Shakespeare of Bhojpuri", the playwright and performer who gave a powerful voice to Purvanchal’s subaltern, the founder of the 20th century theatre form today known as Bidesiya.

Among the programmes organised to mark the occasion was one in Ballia, Uttar Pradesh, where Bhojpuri music’s reigning queen Kalpana Patowary was invited to perform.

Patowary, who seems to have discovered Thakur a few years ago, has since taken to him with gusto. She has sung many of his songs, and even come out with a documentary folk album, The Legacy of Bhikhari Thakur, which was released by London-based music label EMI/Virgin records in 2012 by the then vice prime minister of Mauritius.

Patowary, originally from Assam, started her career in Bhojpuri music in 2003, and owes much of her popularity to vulgar songs that the Bhojpuri music scene has recently been flooded with, and which it is erroneously, but surely, becoming synonymous with.

She has also sung "Uncha Lamba Kad" from Welcome and "Gandi Baat" from R... Rajkumar in Bollywood.

At the Ballia event, while she reportedly tried to sing Bhikhari Thakur’s songs, the audience kept requesting its favourite raunchy numbers. A video of Patowary has since gone viral on Facebook, in which she is seen chiding the audience for being hooked to vulgar music, and saying she will continue to make efforts to “popularise Thakur”.

The video was uploaded on December 24, and split the Bhojpuri audience into two. While many wholeheartedly supported Patowary, others, though agreeing that the audience’s behaviour was wrong, accused her of being a leading contributor to the culture of crass music. Her claim that she was working to popularise a well-loved icon too did not go down well with many.

In the midst of this came an article in a leading Hindi daily, hailing Patowary for her “research” on Thakur. This led to a huge uproar, and the article was taken down.

So what is wrong with one artist trying to pay tribute to another through her work?

The problem, say Bhojpuri music fans, is that Patowary is seeking to appropriate a beloved icon, using him for her own journey of “respectability” from her days as a singer of innuendo-laden songs. Fans, research scholars and literary experts have also claimed that there is no need to “revive” Thakur, as Bhojpuri had never forgotten him.

To understand the outrage, one first needs to understand what Bhikhari Thakur means to the heart of a Purvanchali. Awarded the Bihar Ratna honour, called the “diamond of Bhojpuri literature”, Thakur democratised theatre in the truest sense of the term, telling the stories of the traditionally oppressed in their own dialect, while also making sure his audience was entertained.

Thakur was born into the nai (barber) caste in 1887, considered lowly in a ravaged, colonised Bihar. This was the time when lakhs of Bihari men were leaving home for far-off lands in search of livelihood (yes, they still are). The men left behind broken families – lonely wives, old parents and children who would grow up without them.

Thakur himself went to Kharagpur when he was 30 to earn money. He was deeply affected by the Jagannath Yatra he saw in Puri and the progressive social currents then gathering steam in Calcutta, and came back to his village of Kutubpur.

Here, he founded a new genre of theatre, turning the traditional folk dance nach into a powerful medium of commentary on the prevalent social and economic conditions.

Migration for labour is not just an economic, but also a cultural phenomenon. Thakur can be credited with being among the first to document the pain and struggles of families torn apart by this.

In fact, Bidesiya – his tale of a man who leaves home for work, falls in love with a woman there while his wife fends of a brother-in-law’s advances at home – has now become the name of the theatre form he popularised.

Thakur’s plays, which he wrote and performed in, involved a lot of dance and music, and plots that could have been the story of any of his audience’s lives. The female parts were also played by men.

Through his 29 works, such as Bhai Birodh (enmity between brothers), Beti Bechwa (daughter-seller), Ganga Asnan (ceremonial bath in the Ganges), Bidhwa Vilap (a widow’s lament), Gabarbichor (on the fate of an illegitimate child), Thakur gave a voice to the subaltern within the subaltern – the able-bodied young man had gone abroad, his frail, vulnerable dependents were left to the mercy of the exploitative upper castes.

A book on Thakur’s life, called Sutradhaar, was penned by author Sanjeev. In a conversation published in Forward Press, he mentions an incident that gives a picture of Thakur’s popularity.

Thakur’s Beti Bechwa dealt with the practice of girls from poor, upper caste families being sold off as wives to old, unsuitable men. Sanjeev says that the play “had such an impact in the Bhojpuri-speaking region that at many places girls refused to get married and at other places the villagers drove the grooms away”.

In 1964, the play was staged in Kumardhuvi area of Dhanbad. During one of the shows, more than 500 labourers marched to a nearby Shiv temple and took an oath to never sell their daughters.

Another article in Forward Press quotes Thakur’s long-time colleague, Ramchandra Manjhi, saying that when they performed in Calcutta, mill owners warned the police that if the plays went on, they would have to padlock the main gates of their factories, as after watching Bidesia, workers were likely to leave for their homes the very next day.

So is Patowary wrong?

As far as her claims of taking Thakur to a wider audience go, Patowary is not wrong. She has indeed sung his songs at several national and international fora, thus familiarising people outside the Bhojpur belt with him.

However, trouble begins when she seeks to establish herself as the sole custodian of Thakur’s legacy, which she is at times wont to do. She has written: “I am very much concerned about the inheritance of Bhikhari legacy to my next generation. There are organisations who are also trying to revive him. But practically, none could bring out the artiste from the legend Bhikhari Thakur. Now here, I don’t want to take the credit, but yes I think I am blessed and the chosen one to think and document this project (sic).”

Such appropriation seeks to ignore the work that has consistently been done on Thakur by research scholars in several universities, including at JNU.

Munna Kumar Pandey, who teaches in Delhi University’s Satyavati College and had Thakur as the subject of his doctoral research, says: “There is no question of rescuing or reviving Bhikhari Thakur. A lot of work has been done on him, in 2003, one of his songs, "Re Sajani", was used in Sudhir Mishra’s Hazaaron Khwaishein Aisi. The theatre of the roots movement in Purvanchal focused on him. Thakur was never ‘lost’ for the Bhojpuri people.” 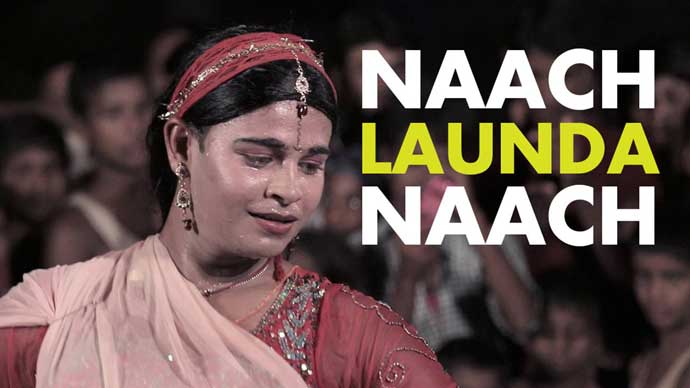 The documentary Naach Launda Naach is a commentary on the "inheritors" of Bhikhari Thakur's art and his craft.

Patowary’s claims are also being seen as an attempt to colonise an icon to “whitewash” her own career.

Atul Kumar Rai, a masters student of musicology at BHU, says: “Artists like Patowary drenched the Bhojpuri audience with vulgar, sexually explicit songs to such an extent that they drowned out the voices of Bhikhari Thakur and Mahendra Mishra. Patowary has sung songs that were used to harass and demean women, those one could not listen to in presence of family members. She can’t suddenly change her image by parroting Thakur’s lyrics. His songs changed the society, can her art ever reproduce that spirit?”

Dharmdev Chauhan, a research scholar at Chandrashekar Azad University, Kanpur, says: “Patowary gained fame through songs such as 'Saiya ji dilwa mangile gamchha bichhai ke (on a bedsheet, he asks for my heart)', and 'Beeche field mein wicket halake, Humse bowling karawlas (in the middle of a field, he made me play with him)'. Artists like her are responsible for the vulgarity prevalent in Bhojpuri songs today. How can she suddenly claim to be a defender of a language she has denigrated?”

Bhikhari Thakur’s art has been colonised before. There have been attempts to discredit it by terming it the derogatory launda naach, or its subaltern identity has been sought to be robbed through the acceptable-to-the-upper-castes name "bidesiya". Little wonder then that Bhojpur is wary now.

Says Munna Pandey, “Patowary’s brand of music has brought down the prestige of the Bhojpuri language. It is not her, but people like Jainendra Dost (who runs Bhikhari Thakur Repertory Training & Research Centre and has made the documentary Naach Launda Naach), who are working hard to keep Thakur’s legacy alive.”

While debate on Patowary’s contributions rages on, one can hope that it will bring into focus the vulgarity in Bhojpuri music today, and artists and fans can come together to restore the glory of the language in which Bhikhari Thakur once so brilliantly expressed himself.

#Bhojpuri music, #Kalpana Patowary, #Bhikhari Thakur
The views and opinions expressed in this article are those of the authors and do not necessarily reflect the official policy or position of DailyO.in or the India Today Group. The writers are solely responsible for any claims arising out of the contents of this article.