If Kangana Ranaut wants to be Bollywood's female Aamir Khan, this isn't going as per script

A real stand on a real issue, that's what we want. Not a controversy's child.

Lightning doesn’t strike in the same place twice. But Kangana Ranaut does. And if the latest debate around Manikarnika: The Queen Of Jhansi is anything to go by, this is exactly where Kangy is going wrong.

For the uninitiated, Krish Jugalmundi has ‘revealed’ that Kangana hasn’t directed 70 per cent of the film, as she reportedly claimed in recent interviews. She’s directed 25-30 per cent at best, he claims, and even those were apparently mostly unnecessary reshoots of scenes and chopping off of other actors' roles. By 'other actor', we mean Sonu Sood, who was to play Sadashiv Rao, the antagonist to Kangana’s protagonist, which role went to Mohammed Zeeshan Ayyub eventually.

That memories of Simran and Kangana’s infamous spat with writer Apurva Asrani would come rushing back is but obvious. Especially given that neither of them stops talking about the ‘traumatic’ experience. But we’re not getting into that. Is silencing everyone the best policy, Kangana? (Source: PTI)

Rangoon and Vishal Bhardwaj too had apparently withstood similar storms, and if ‘little birdies’ talking to various news sites are to be trusted, Kangana’s exit from Ekta Kapoor’s Agent X was also because of similar reasons.

And yes, it bears an uncanny resemblance to Aamir Khan and Amol Gupte’s legendary spat during Taare Zameen Par.

Now, there are two things here: For one, Kangana trying to establish herself as a ‘thinking’ female actor Bollywood needed yesterday. Something modelled after Aamir Khan. And then, Kangana trying to scale that mountain possibly using ‘controversy’ as ropes.

Kangana has come a really long way since Gangster and Woh Lamhe.

We know exactly what an uphill task that was, given that it is never easy for a female actor to emerge over and above their male counterparts. At this point, if there is anyone who can claim the Aamir Khan-content-driven mantle, it is she.

But, no, just controversies won’t do. 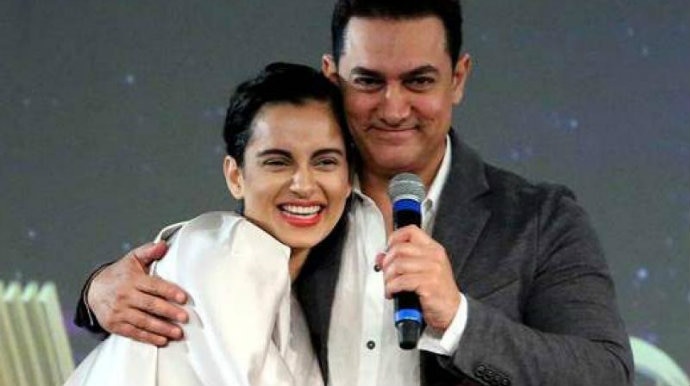 We don't need another Aamir. We need a Kangana. (Source: YouTube screengrab)

We need a representative who is not only aware of socially relevant things but is willing to take a stand too. Not someone who’d choose to toe the line — even if that means to go against the larger consensus, and definitely not someone who has been reduced to a mere keyword on the Internet.

You see, nothing is ever wiped out off the Internet — everything is carefully boxed and stored, and shall be pulled out when needed.

Which is why it is detrimental to Kangana’s hard-won image that she only makes headlines for her spats and not her stands — be it personal or professional.

Here is the proof kangana clearly asked u to come & see the film on 6th December, would u please explain this .... ?? ⁦@DirKrish⁩ pic.twitter.com/bxRCQkBidn

Add to that, her sister, Rangoli Chandel’s sometimes irresponsible tweets and you have a time bomb just waiting to explode. She apparently recently shared screenshots of Kangana’s message to Krish, the first director of Manikarnika, which only reminds us of the time when emails apparently exchanged between her and Hrithik Roshan were leaked.

Our sincere request to Kangana is, stop, take a step back if needed, and re-evaluate. We’re already convinced that you have it in you.

All we want is for you to realise that we don’t need another Aamir Khan, we already have one.

We need a Kangana Ranaut. Can the real one stand up and shake off the unneccessary noise please?