Kesari is a triumph of acting, action – and Akshay! The movie is set in 1897, in the North-West Frontier Province, now Khyber Pakhtunkhwa. (Source: YouTube screengrab)

So, Kesari is a triumph. It is Akshay Kumar’s triumph – but it is also more.

The true story is the most powerful star of Kesari.

Showcasing the Battle of Saragarhi, it is set in 1897, in the North-West Frontier Province, now Khyber Pakhtunkhwa. Here, 21 Sikh soldiers die fighting 10,000 Afghan tribesmen attacking their fort. Despite massive odds, the Sikhs remain valiant to the core. They are led by Havildar Ishar Singh (Akshay Kumar) who inspires with his military acumen, his spirit – and his gentleness.

Akshay Kumar is astonishing as Ishar Singh – featuring no traces of Akshay Kumar. There is none of the star’s swagger or teasing smile here. Instead, Ishar is a simple peasant-turned-soldier who changes upon receiving racist abuse from his British officer. In a slower first half, Ishar perceptibly shifts, from a sipahi doing his ‘tooti’ to a man who fights ferociously – as a free being. Akshay is superb – his face, smaller than usual under a large pagdi and a fulsome beard, looks more gaunt than glamorous. His eyes, when he salutes the racist Brit, swim with hurt. His smiles, during imagined conversations with his wife Malko (Parineeti Chopra in a sparkling cameo), are shy. There is no sign of the flamboyant ‘Khiladi’ Kumar here.

Instead, the real star is the cinematography – shot by Anshul Chobey, capturing the NWFP’s unrelenting landscape, a kaleidoscope of snow-clad mountains and dusty plains, harsh, rocky, an occasional silvery nadi, and everywhere, an implacable, insistent ochre.

Kesari’s ensemble cast is terrific. Each soldier carves out his individuality; there are small touches – a postcard with a child’s handprint, a pair of shoes lovingly bought for an ageing father, the trembling mouth of the youngest soldier, Gurmukh Singh (a notable performance) – that stamp each sipahi as a person from a world of vivid love. This love extends to their comrades, each falling after decimating multiple Afghans, many killed by foul means, not fair combat.

In this, Kesari will touch more than a historical nerve.

The film paints a portrait of the past turbulence of the NWFP – and subtly suggests its present dangers as well. The film’s portrayal of the Afghan Mullah Syedullah, who uses jihad to push towards Hindostan, is spot-on. When the Mullah captures, tortures and beheads an Afghan woman, the grimness underlines how little has changed in that part of the world. The action, especially in the stunning second half, throbs – there are remarkable wide-angle war scenes and closer-focus shots, capturing Akshay’s martial prowess in detail.

There are a few quibbles too.

The Afghans are mostly portrayed as a clump – they are either a bunch of leering, gibbering savages, or plasticky peasants, but there’s little individuality beyond that. An Afghan girl has a small role – but this lacks impact. Most of the actors playing Afghans look oddly miscast while one – an effeminate sharp shooter, all reddened nails and spiteful lip-sticked mouth – remains a mystery, unless the point of his existence was to recall Malik Ghafoor of Padmaavat fame. 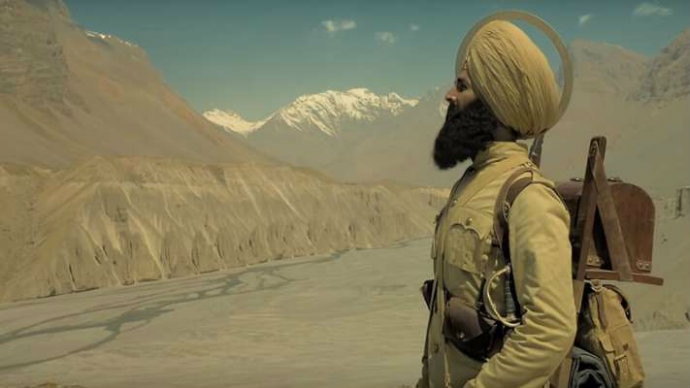 Yet, these are minor quibbles. For the most part, Kesari strides across history – and topography (its Punjab sequences are marvellous too, evoking the exact green of its fields, the vast blueness of its skies, against which a baradari archly arches) confidently. Certain scenes – the ‘suicide bombers’ or Ishar murmuring, ‘Chal jhootha’ to the malevolent Mullah spark applause. And the film’s running thread flames at the end, when the Sikhs lose the battle – but win the war.

Watch Kesari, a vibrant movie which captures one point from the past – that’s relevant in the present too.