Lust Stories: Men? Who needs them when in Bollywood

It's raining vibrators in Bollywood. After a cameo in Veere Di Wedding, opposite Swara Bhaskar, it has made a special appearance in Lust Stories, a collection of four shorts about love and desire in contemporary India.

It's a good thing for several reasons, not the least of which is that it normalises the various forms of female desire (in this case it is a woman climaxing to the chorus in Kabhi Khushi Kabhi Gham in a segment directed by Karan Johar, which is both ironic that it is by the director of a rather dated vision of happy families as well as acknowledgment that it takes more than the national anthem to get women excited – no offence to Kajol.)

Normalising what women want, even if its largely through the male gaze, is a step forward for Bollywood, whose version of romance till now was as stunted as its version of masculinitiy – flex your biceps and stalk the woman into submission.

In the segment directed by Karan Johar, starring the always flawless Vicky Kaushal as the shy boy and a surprisingly luscious Kiara Advani as the young woman who wants more, a newly married woman finds herself being persuaded to have children by her mother in law. Because, you see, poori ho jayegi hasrat, to band karo yeh kasrat. Once children arrive, or so the mother in law believes, the woman no longer has to have sex with the husband, and is free to do what she really wants to, raise children.

But our Kiara, dealing with a tone-deaf though harmless husband, has no such burning desire, and would like to explore her sexuality first, learning to live adventurously via her older colleague, the gorgeous Neha Dhupia, and told by her mother to get married and then have as many ice creams as possible (which I assume is some sort of code for foreplay?). 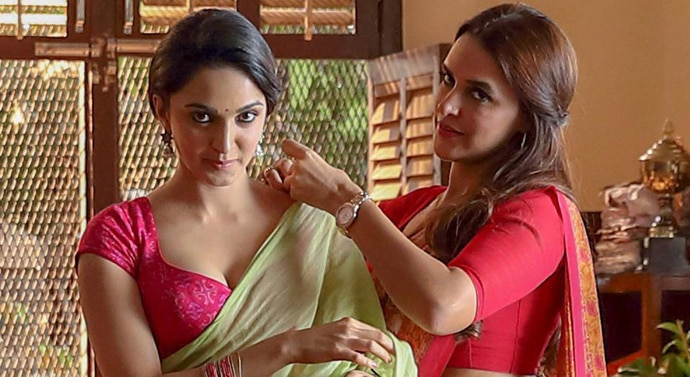 It is also normalising the female form in all its diversity. Just as Veere Di Wedding consciously decided to put the plus size Shikha Talsania in a swimsuit, Dibakar Banerjee's segment puts Manisha Koirala in a one piece too. There are no perfect passions, just as there are no perfect bodies, but that doesn't mean that both have to be hidden from public view.

Manisha Koirala plays a woman who gives up her bank job to raise children and be the perfect mother, wife, and hostess to a husband who seems to value money over all else. Sanjay Kapoor plays her husband, again completely oblivious to his wife's desires, but desperate about keeping up appearances.

Dibakar's social commentary has always been supremely accurate, whether it is honour killings in Sex Love Aur Dhoka or rampant consumerism in Oye Lucky Lucky Oye. Here he has a weary Manisha Koirala telling her husband he needs a mother, not a wife; and the husband quite tamely accepting what seems quite a cosy menage a trois.

Bhumi Pednekar's lusty domestic, whose young employer is happy to sleep with her but cannot quite meet her eye in the cold light of day in Zoya Akhtar's beautiful segment. Radhika Apte's sexually avaricious teacher who cannot keep her hands off a student in Anurag Kashyap's segment.

Kiara Advani's eyeroll when the roses on her wedding bed read Paras Beds Megha. Neha Dhupia's glare as the principal of the school talks exclusively to her cleavage – the same man studiously changes the spelling of loins to lions in a copy of Lolita brought to him by a busybody mother.

Lust Stories is by no means a complete adventure into the recesses of women's mind and bodies, but it's at least well begun. So Radhika Apte's teacher can dream of living like Amrita Pritam, married to Imroz but passionately drawn to Sahir Ludhianvi.

Well the Lust Stories women are not content to be could have beens, or wanna bes. They want to be, be themselves.