Mughal-e-Azam to Manikarnika: How Bollywood is forever in love with history, kings and queens

The past will merge with the present, neither for the first nor the last time.

Moving away from depicting the times they live in, many of them have made extraordinary period dramas. Interesting, larger-than-life characters have come to a second life on screens, among them, kings and queens who live on in public memory.

Kangana Ranaut had once played a middle-class 'queen', the story of a shy and ordinary girl's journey towards spiritual emancipation, in a film of the same name released in 2014.

Five years later, Ranaut will be seen as Rani Laxmibai in Manikarnika: The Queen of Jhansi.

As is well known, Laxmibai, the 19th century queen of Jhansi, had walked down the path of violent confrontation with the colonial British East India Company during the Great Indian Rebellion of 1857.

That shrill battle cry! The Rani Laxmibai movie is a nod to nationalism. (Photo: Screenshot/Still from Manikarnika)

A defining moment in Manikarnika's official trailer has the queen screaming 'Har har Mahadev' on the battlefield, exposing her blood-stained teeth.

The shrill battle cry is a nod to nationalism, reminding the viewer why this queen's bravery against an enemy we love to hate must not be forgotten.

Manikarnika is not the first film on Rani Laxmibai. In 1953, the legendary Sohrab Modi had made Jhansi Ki Rani with his wife Mehtab in the title role. The ambitious project involved technicians from abroad, including the Academy Award-winning cinematographer Ernest Jacob Haller of Gone with the Wind fame. The film was a box office fiasco, resulting in a big financial setback for Modi.

At the moment, it seems that the film has given rise to enough curiosity to attract audiences in the first couple of days. The earlier movie on Rani Laxmibai was a fiasco. (Movie poster/Wikipedia)

Sohrab Modi had also made Pukar (1939), set in the Mughal era. Chandra Mohan played Emperor Jehangir and Naseem Banu was seen as Noor Jehan in a story in which the just monarch faces an unusual challenge, following an incident involving his beautiful wife.

An authoritative actor himself, Modi was seen as King Porus (called Puru) in Sikandar (1941). Prithviraj Kapoor played Sikandar, the Greek king and conqueror, better known as 'Alexander the Great'.

The story of Sikandar and Puru continues to be discussed for its battle sequences and fine performances by the two acting greats of Hindi cinema back then.

The actor-director's passion for making historical dramas also led to Prithvi Vallabh (1943), another of his success stories.

An adaptation of Kanhaiyalal Maneklal Munshi's Gujarati novel of the same name, the film deals with the rivalry between King Munj (Modi) and King Tailap, and what happens after the latter, who seeks revenge for his humiliation, captures the former.

Films with kings and queens as characters create possibilities for showing royal courts and their lifestyle in all their glamour and grandeur. If the script includes a war, sequences showing armies in conflict on sprawling battlefields widens the scope to showcase good cinematography.

'Royal' virtues of benevolence, bravery and justice also seem a lot larger than life compared to the everyday ethics of 'ordinary' men and women.

Several historical dramas have thus been made in Bollywood — but none was more popular and critically acclaimed than K Asif's epic Mughal-e-Azam which took almost 16 years to make and finally hit the marquees in 1960.

The film shows the father-son disagreement between Emperor Akbar and Prince Salim (later, Emperor Jahangir, played by Dilip Kumar), but is essentially the tragic love story of Salim and Anarkali, a courtesan (Madhubala).

The film has great performances and superb songs. Among them, the Lata Mangeshkar classic Pyar Kiya Toh Darna Kya, which was filmed on a grand set, inspired by the Sheesh Mahal of the Lahore court, stands out.

Anarkali, incidentally, has been a favourite with filmmakers.

The story of Anarkali and Prince Salim was later re-imagined by Nandilal Jaswantilal, leading to another Anarkali (1953) with Pradeep Kumar as the prince and Bina Rai as the courtesan. The viewers loved the protagonists and the treatment of the subject, making it a big commercial success. 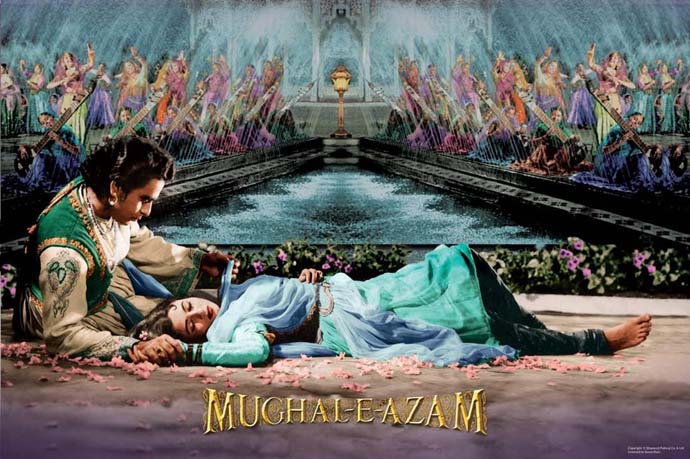 Mughal-e-Azam defined the Bollywood 'historical': This genre has given us unforgettable songs. (Poster/Wikipedia)

The Mughal period has played temptress to several filmmakers. That is probably because the very mention of the dynasty conjures picturesque images of opulence, aesthetics, doomed love sagas and soaring military ambitions.

The romance, which also emphasised religious harmony, ran into several controversies after Rajput groups claimed that Jodhaa was married to Jahangir, not Akbar. Some even claimed Jodhaa was not married to any Mughal at all. Some historians affirmed that the Mughal emperor's Rajput wife's name wasn't Jodhaa. The grand film also sparked off controversies over whether Jodhaa was married to Jahangir or Akbar or any Mughal at all. (Poster/Wikipedia)

These controversies notwithstanding, the grand historical film revealed Gowariker's fondness for the subject. It was sensitively handled, with the two very good-looking leads charming the viewers with their performances.

The typical Bollywood 'historical' with kings and queens shows the protagonists breaking into songs. A closer look reveals that such films have had many memorable songs, some of them beautifully choreographed.

But with the Bollywood 'historical', inaccuracies have also been common for three reasons.

The screenwriter has got his facts wrong. Or, s/he hasn't been overly concerned about them. Or, the film has been based on a novel with royal characters from history. What is made, in other words, is fiction, based on famous names like Akbar or Jahangir and oft-repeated events in their lives. After that, storytelling takes over.

That doesn't mean the directors have blundered while making such films. Unsuccessful at the time of release but acknowledged as a fine film today, director Lekh Tandon's Amrapali (1966) is set in 500 BC. The story revolves around Amrapali (Vyjayanthimala), the royal courtesan of Vaishali, and King Ajatashatru (Sunil Dutt), the king of Magadh who wants to conquer Vaishali.

The two fall for each other after Amrapali attends to the king's injury without being aware of his identity. The story that deals with the ideas of love and enlightenment has fine performances by both the leads.

Some box office turkeys are so big though that filmgoers cannot forget them easily.

Kamal Amrohi's Raziya Sultan (1983) was one such film. The story showcased the first and only woman ruler of the Delhi Sultanate (Hema Malini) who falls in love with a slave (Dharmendra) — the visually impressive film failed to connect with the audiences. Malini was miscast in the title role, which didn't help matters.

The film, which begins with Asoka's early days, and ends with his rejection of violence after the bloody Kalinga war, was well-received by many critics.

Shah Rukh received some criticism for his portrayal of Asoka. But the film was an outcome of ambition and diligence. The Clash of the Queens: Manikarnika will be compared with Padmaavat. (Photo: Twitter/Still from Padmaavat)

Modern-day filmmakers have become far more susceptible to violent protests and irrational demands for bans on their films. Padmaavat faced this, with the Rajput Karni Sena alleging that the queen had been shown in an objectionable manner.

After controversies, death threats for Bhansali and Padukone, and delays, the film was released. It was critically and commercially acclaimed, with Bhansali's direction, Padukone and Singh's performances, cinematography and music receiving special praise.

Manikarnika will be releasing not much later after Padmaavat.

It is possible that the film will be compared to Bhansali's work.

The clock is ticking. Laxmibai will ride into our theatres soon. The past will merge with the present, neither for the first, nor the last time.