Bollywood's surprise gift: How Manoj Bajpayee paved the way for brilliant 'out of the box' acting in Hindi cinema

It is not that Bajpayee hasn't had failures. Yet, his ability to bounce back is commendable. His commitment to excellence and fuss-free attitude also stand out in an industry of bling.

The year was 1999. Actor Manoj Bajpayee was expected on the sets of the Hansal Mehta-helmed drama Dil Pe Mat Le Yaar! — inside a mill in Andheri, a Mumbai suburb.

The actor walked in a few minutes after my arrival for an interview with him, animatedly discussing a shot with the director.

The shot over, I caught up with Manoj during his dinner break. He suggested we go inside a trailer van, where he would have his meal and answer my questions.

Inside the trailer, the actor’s Man Friday served up a modest meal of khichdi and mashed potatoes, known as aloo chokha in Manoj’s birthplace, the hamlet of Belwa in Champaran, not far from the Nepal border in Bihar.

Humility personified and acutely aware of working in an unpredictable industry, the actor summarised his approach to life remarkably, “Yaar, pehle jeb mein paisey nahin hotay thhay. Ab gaadi khareed liye hain. Agar fir kisi din jeb khali ho gaya, toh wapas gaon chaley jayenge.” (Friend, there was a time when I had no money. Now, I have bought a car. If my pockets get empty once again, I will go back to my village).

When we got talking about his work, one of his first statements was, “I have a simple philosophy in life — kaam karo aur kat lo.” (Do your work. Go back home).

Throughout the interview, he conveyed the impression of being a seeker of better acting skills. And he didn't hide his fanboy-like reverence for Amitabh Bachchan, whose action drama Zanjeer was the reason why he decided to become an actor. 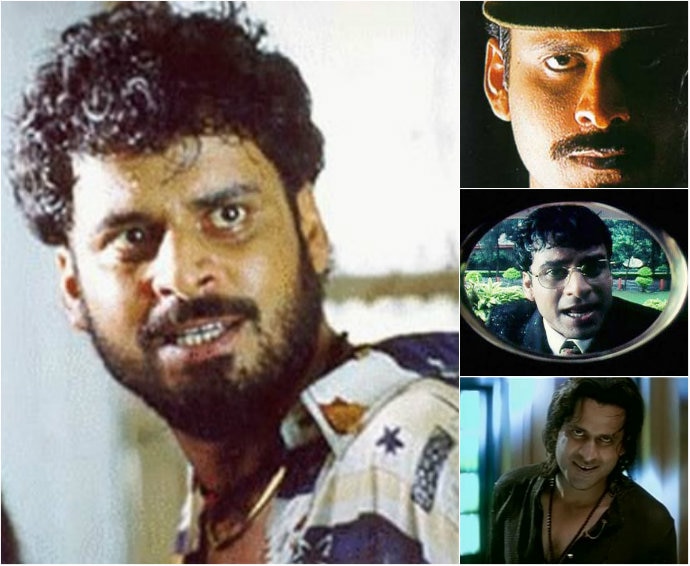 Form Satya to Shool, Kaun to Aks, each character Manoj essayed has stayed with us. (Source: YouTube screengrab. Collage: DailyO)

Bajpayee’s captivating portrayal of the Mumbai don Bhiku Mhatre in Ram Gopal Varma’s edgy crime drama Satya (1998) was his ticket to fame. Discussing his nationwide recognition after Satya's success made him uneasy — the actor hadn't been able to accept the fact of being famous until then.

He felt better off being an ordinary man.

Exactly two decades after the interview, Manoj Bajpayee is widely known as one of the best actors in contemporary Indian cinema. He has been recently honoured with a Padma Shri, an award, one believes, that has come to him rather late in the day.

A bona fide method actor who failed to get admission at the National School of Drama (NSD), but was later offered a teaching position in the same institute, Manoj benefitted from attending a workshop conducted by the redoubtable Barry John. The workshop had another attendee — Shah Rukh Khan. He became a popular stage actor in New Delhi and started Act One, his own company, in 1990.

He was first noticed on a relatively big scale as Man Singh, the dacoit who joins Phoolan Devi, in Shekhar Kapur’s dacoit drama Bandit Queen (1994).

But Bhiku Mhatre, the megalomaniacal don of Satya, is his most popular character until today — the realistic film that set the tone for gangster films in Hindi had many memorable moments.

The film has a sequence in which Bhiku is standing on a cliff near the seashore. He laughs hysterically and reminds everybody, “Mumbai ka king kaun? Bhiku Mhatre.”

The sequence focusing on Manoj was a short one. But it showcased the actor in him, suggesting that he had a great future.

Today, it is obvious that Manoj has chosen many good scripts. He has walked down the path of both commercial and offbeat cinema, but not many of his characters have been stereotypical.

In RGV’s minimalist psychological horror drama Kaun (1999), his character of an eccentric man makes us wonder whether it is the serial killer on the loose. Shot in 15 days, the experimental film kept the viewer hooked because of its sinister atmospherics and superb performances by Manoj and Urmila Matondkar.

In E Nivas’s crime drama Shool (1999), he is remarkable as an idealistic sub-inspector who runs into a crime-politics nexus in his town. The story ends with an act of brutal vengeance — after it has already shaken up the viewer with its realistic treatment of the theme.

In Rakeysh Omprakash Mehra’s supernatural drama Aks (2001), he magnetises the viewer with his performance of a serial killer, with his eerie body language, quirky delivery and strange ways of eliminating hapless victims. The character gets killed much before the film ends — yet its impact and presence can be felt until the last minute.

In Chandraprakash Dwivedi's Pinjar (2003), based on Amrita Pritam’s widely acclaimed Partition novel, he is simply marvellous as the Muslim abductor of a Hindu girl. The manner in which their relationship redefines itself gives a nod to national integration.

In Prakash Jha’s political thriller Rajneeti (2010), which was inspired by The Mahabharata, he is a politician whose character has shades of Duryodhana from the Ved Vyasa epic.

Despite acting in a multi-starrer packed with powerhouse performers like Naseeruddin Shah and Nana Patekar, Bajpayee made a significant statement of artistic individuality in the film. In the first part of Anurag Kashyap’s two-part magnum opus Gangs of Wasseypur (2012) that takes the viewer deep inside the world of the coal mafia in Dhanbad, Jharkhand, his character is involved in shady business dealings and grave crimes. He is eventually shot dead in a gripping sequence no viewer can ever forget — here, too, he is brilliant.

In Neeraj Pandey’s heist film Special 26 (2013), he captures the viewer’s attention as the CBI officer pursuing a gang of cunning operators, who conduct fake raids and take off with valuables. As the character on the right side of the law, his standout performance is all the more remarkable because the focus is mostly on a bunch of crooks out to make easy money.

In Hansal Mehta’s Aligarh (2016), based on a real story, he is Professor Shrinivas Ramchandra Siras, a professor of Marathi at the Aligarh Muslim University, who was suspended from his job on grounds of morality after a TV crew filmed him having sex with a rickshaw puller. Aligarh will always stand out as one of Manoj's most powerful performances. (Source: YouTube screengrab)

Siras’s dignity is restored after the court revokes his suspension — but he is found dead before he can get back to work. Manoj’s powerful portrayal of the protagonist earned him appreciation and awards — two things that have come to him easily and appropriately for the most part of his career.

Manoj has also been guilty of acting in mediocre to bad films like Fareb, Bewafaa and Acid Factory — which threatened to facilitate his disappearance from the film industry for a while.

What makes him stand apart though is his acting in many excellent films, while his real significance lies in the fact that he has opened the doors for some really talented ‘unusual' actors in Bollywood.

The immensely gifted Kay Kay Menon told this writer, “It is because of Manoj that an actor like me found acceptance in an industry that flourishes on marketing stereotypes.”

That’s an achievement Manoj can be proud of — while he waits for the release of his next film.

Also Read: Kalank Movie Review: ‘It's bombastic, bizarre and Bhansali-lite. But 'Kalank' does touch your heart!’

Post your comment
#Sonchiriya, #Aligarh, #Rajneeti, #Gangs of wasseypur
The views and opinions expressed in this article are those of the authors and do not necessarily reflect the official policy or position of DailyO.in or the India Today Group. The writers are solely responsible for any claims arising out of the contents of this article.