You know it's more than worthy of a watch when Vidya Balan shines over Akshay Kumar in a film headlined by him. I'm going with 4 stars out of 5.

​There is absolutely no true way of knowing if the Mangalyaan mission that's famed for its cost-effectiveness actually stemmed from a simple poori-frying experiment. But we have grown up reading stories of how gravity was discovered after an apple fell off the tree, thereby proving that sometimes, the biggest of achievements have the simplest of ideas behind them.

There is also no way of knowing if the woman scientist who suggested we take the spare parts from Chandrayaan 2 instead of letting them go waste since that mission has been held off indefinitely — a mission-saving and potentially face-saving suggestion — was met with a response like, "Women! They will feed you yesterday's leftover dinner for breakfast, so that it doesn't go waste."

Is it heartbreaking to see a woman's homemaking skills being credited for her scientific achievements and breakthrough ideas — and not her years of education, hard work and presence of mind?

Does it take away from the film Mission Mangal? Only if you are willing to look at the film that way. 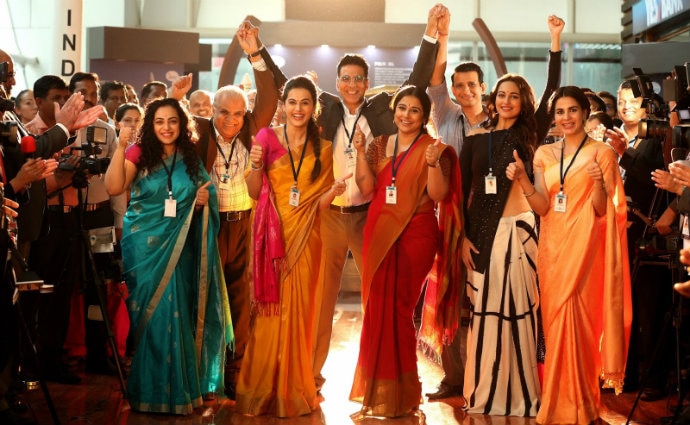 I am going to go ahead and call Akshay Kumar's Mission Mangal his Chak De! India moment.

Leading a team of underdogs to glory when nobody really believed that you could win is just the kind of story we love watching — especially on August 15 when the mood is tricolour.

It definitely helps that Akshay Kumar, the hero, did not resort to his usual heroic antics. He is not seen dancing or romancing even with the likes of Sonakshi Sinha, Taapsee Pannu, Kirti Kulhari and Vidya Balan in the cast.

The problem with having Akshay Kumar in an ensemble cast today, however, is perhaps similar to what in the 70s, film writers faced when they were to cast Amitabh Bachchan, the 'angry young man.' The audience loved to see Big B do what he does best, so much that writers were either scared to portray him differently, lest he isn't accepted, or just failed to think outside the box. Akshay Kumar has been stereotyped in that sense too — and is expected to be the superstar, no matter what.

Which is why you can expect some long preachy dialogues meant to encourage you, even if that means bringing up the 1983 World Cup and Kapil Dev at least twice.

Vidya Balan, though at times reminding you of Tumhari Sulu, has really outdone herself, if that was even possible. In Tumhari Sulu, Vidya's oomph — something she carried over from Dirrty Picture — seemed really out of place in the body of a regular middle-class woman. In Mission Mangal, however, she stayed simple, and thus becomes the most endearing character in the cast.

Sonakshi Sinha and Taapsee Pannu have clearly picked this film simply because of their working relationship with Akshay, but then, no one can deny that it's a great career move. Their roles are small, restrictive and with little or no meat, and to be honest, it could have been done by just about anyone else.

Sharman Joshi will break your heart, not because he under-performs, but because you are reminded of the potential this man has and how Bollywood has not been able to tap it completely. Despite that, you can still see how impeccable his comic timing is. And even though his role is as small as Sonakshi's or Taapsee's, you see that he brings to the table something perhaps no one else could.

A special mention here to Sanjay Kapoor, seen in a substantial role after a really long time as Vidya's husband. Though we never really get to know what he does for a living (and we eventually find out that he even forgot to pay the electricity bill), he portrays a cynical man always at loggerheads with his teenage kids, quite to perfection. Breaking into an impromptu jive at a bar when he requests the DJ to play Akhiyan Milaye Kabhi — his best hit from back in the day — did little for the story overall, but it was fun to watch, simply because of its nostalgia value.

The film, to its credit, portrays the planning and execution of the Mangalyaan mission quite well. You see an idea and then you see it developing into something far beyond that. One needs to commend Jagan Shakti (director) for his attention to detail. It was never meant to be a Hollywood sci-fi movie. It was always meant to be a simple story of extraordinary achievements — and the film delivers just that.

In keeping with the spirit of the Mangalyaan — which was essentially about eliminating the frills —  the film could have easily done away with the 'cleaning song' where the team of scientists assigned on Mission Mars were seen sweeping, dusting and painting the old dilapidated building they were given as the Mars headquarters. Of course, what is a Bollywood film if it doesn't have a few songs injected here and there? The preachy (read 'encouraging') dialogues could also have been cut down.

On the whole though, this is just the film you'd love to spend Independence Day watching.

#Movie Review, #Movie ratings, #Sonakshi Sinha, #Vidya Balan
The views and opinions expressed in this article are those of the authors and do not necessarily reflect the official policy or position of DailyO.in or the India Today Group. The writers are solely responsible for any claims arising out of the contents of this article.