Was actor Mithun Chakraborty one of the original 'urban naxals'?

[Book extract] Like thousands of impressionable Bengali youth in late 1960s, the actor too was swayed by the extremist ideology.

Presenting an exclusive excerpt from Rasheed Kidwai's new book Neta Abhineta: Bollywood Star Power in Indian Politics (Hachette), which explores politics, cinema and the point where the two intersect. The book traces this phenomenon through intimate and compelling portrayals of some of the most popular actors in Hindi cinema who have, from the years leading up to India's independence in 1947, entered Indian politics for reasons ranging from a sense of social commitment to a desperate quest for a second chance at fame when their star power dimmed. Politics, cinema and the point where the two intersect. (Photo: Hachette)

Actor Mithun Chakraborty was an original “urban naxal”, a term that is currently used to describe a section of left-liberals. The supporters of BJP-Sangh parivar insist that presence and threat of urban naxals on nation’s sovereignty is both potent and real and not a figment of the imagination as liberals insist.

Born on 16 July 1950 into a lower middle-class Bengali family as Gouranga who had renamed himself as “Mithun”, was like thousands of impressionable Bengali youth in late 1960s, swayed by the extremist ideology on which the Naxalite movement was founded.

His brother’s death in an accident shook him, however, and made him question the illusionary notion of an armed struggle leading to the birth of an ideal society. Due to the police crackdown on Naxals in West Bengal then, Mithun had to go into hiding and remained a fugitive from justice for quite some time.

It was only after he had joined the Film and Television Institute of India (FTII) in Pune that he managed to exorcise the ghosts of his political past.

Speaking to journalist Ali Peter John, the actor recalled how his name had already reached Bombay before he landed there.

“People in the industry and outside it knew all about my involvement with the Naxalite movement in Calcutta and my close links with Charu Mazumdar, the fiery leader of the Naxalites. I had quit the movement after there was a tragedy in my family, but the label of being a Naxalite moved with me wherever I went, whether it was the FTII in Pune or when I came to Bombay in the late seventies,” he said.

In Bombay, Mithun had another screen name for himself, albeit briefly — Rana Rez.

He met writer and film-maker Khwaja Ahmad Abbas, who offered him the lead role in his film The Naxalites (1980), based on the movement. Mithun was reluctant to accept it, however, fearing that it would rekindle memories of the days when he had always been on the run.

For Mithun, The Naxalites remains one of the most memorable films of his career. (Photo: Screengrab)

“But it was the name of Abbas sahab that inspired me to do the film,” he would admit to John. “I was being branded as a dancer and a fighter more than [as] an actor and it was the chance of playing a Naxalite in a film directed by Abbas sahab that made me accept the challenge of ‘living’ the life of a Naxalite.”

For the actor, The Naxalites remains one of the most memorable films of his career.

To begin with, he was enthusiastic about working with Abbas, who was a living legend at the time. “I had only heard about him at the FTII and knew that he was the writer of some great films made by Raj Kapoor and had made his own films which were very different from the run of the mill films made in Mumbai,” Mithun told an interviewer later, adding, “it was a mind-blowing experience coming in touch with a simple man with high values of life and his own simple ways of working as a writer and a filmmaker.”

Abbas was firm in his stand that Mithun would have to give up wearing fancy clothes that were not compatible with the character he was playing in the film. He also made it clear to the actor that there would be neither private make-up men nor hairdressers in attendance nor even any conveyance allowance. In fact, Abbas encouraged his actors to travel by train from Bombay to Calcutta for the film’s shooting and that too in second-class or third-class compartments.

The Naxalites did not do well at the box office, though it did capture the spirit of the political movement, but by then, Mithun had gained recognition for his role in Mrigayaa, which was released in 1976 and became his debut film. 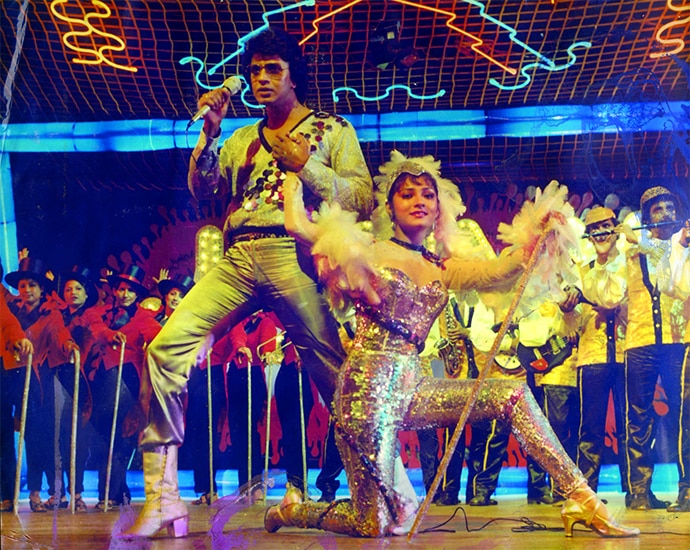 A fighter and a dancer — Mithun has donned both hats in his life and his career. (Photo: Screengrab)

Decades later, a crematorium was certainly an unusual setting for a political debut.

Mithun was in Kolkata when Bengal’s beloved film legend and yesteryear actress Suchitra Sen died. Mamata Banerjee, chief leader and head of Trinamool Congress (TMC), reportedly conveyed her decision to give the ticket to the actor at the Keoratala crematorium on January 17, 2014, where Suchitra Sen’s last rites were being performed. “Ami bhebe niyechi (I have decided),” Mithun quoted Banerjee as saying.

Interestingly, prior to joining Mamata’s TMC, the actor had once been associated with the Left, but had distanced himself once the Jyoti Basu era ended. He was also close to the late CPM leader Subhas Chakraborty during those years, and flew down to Kolkata when Chakraborty passed away on August 3, 2009. Mithun made his way to Writers’ Buildings, the Bengal government secretariat, to pay his last respects to the departed leader of the masses and then joined the crowd that accompanied Chakraborty’s mortal remains to the Keoratola crematorium.

Trinamool leaders like Sultan Ahmed (now dead) felt that Mamata Banerjee must not have attached much importance to Mithun’s past links with the Left, as everyone was aware of the actor’s proximity to Subhas Chakraborty during the heyday of the Left Front government. In fact, on every occasion that Mithun visited Kolkata, he invariably headed to Chakraborty’s house for lunch or dinner. “Subhas Da”, in turn, would put up at the actor’s hotels, enjoying free hospitality. The Mithun-Subhas bond led to the actor hosting "Hope ’86", a song-and dance show organized to raise funds for flood relief, at Calcutta’s Salt Lake stadium in 1986. Much to the CPM’s delight, Mithun had brought along Amitabh Bachchan and Rekha as participants. Even Chief Minister Jyoti Basu (“Jyoti Uncle” to Mithun), who was not particularly known for his inclination for cultural affairs, had responded to a personal request from the actor and attended "Hope ’86".

Every time a fund-raising programme was launched by the CPM government, Mithun gave live performances, free of cost. However, it was only when Basu’s successor Buddhadeb Bhattacharjee took over as Bengal’s chief minister in 2000 that Mithun’s ties with the Left began unravelling.

Bhattacharjee not only held masala Hindi films in low esteem, but also openly disapproved of many of Subhas Chakraborty’s decisions and activities.

Mithun holds a degree in Chemistry from Calcutta’s famous Scottish Church College. In his college days, he had won numerous bouts in Greco– Roman-style wrestling.

Also Read: Manto is a film of genius, audacity – and pure love

Post your comment
#West Bengal, #Jyoti Basu, #Urban naxal, #Mithun chakraborty
The views and opinions expressed in this article are those of the authors and do not necessarily reflect the official policy or position of DailyO.in or the India Today Group. The writers are solely responsible for any claims arising out of the contents of this article.