Naushad passed away on May 5, 2006 - 15 years ago. But old masters never die. The music lovers and connoisseurs still adore him. Like a diamond, a genius is forever.

Shanmukhananda Auditorium in Mumbai cannot be accused of being a small hall. Far from it, it is one of the biggest in Asia with a seating capacity of more than 2,700 people at three levels. If you add the aisles and other spaces on the sides and at the rear, then the audience can swell up to 5,000. About three decades back, I attended a felicitation ceremony for a music director who was no longer active. It was his birthday. The entry was free, and the hall was packed to the rafters. Before the official program began with Dilip Kumar as the main speaker, short clips of his songs were screened on one side of the empty stage. The crowd, mostly on the wrong side of the 50s, was in raptures.

But what was this?

Everyone thought that he had hung up his baton, but the Master of Ceremonies announced during the program that he had just been signed for Akbar Khan’s Taj Mahal- An Eternal Love Story (it was released a few years later in 2005). There was thunderous applause. The virtuoso would be weaving his magic a little bit longer!

About 20 years earlier, in 1982, at the same venue, Noor Jehan had sung his Awaaz De Kahaan from Anmol Ghadi (1946), the eternal song of hers sung during a brief tenure in India before Partition, defining her musically in the Indian consciousness. The maestro wielded the baton that day too, 36 years after wielding it in the studio.

His hold over the musical firmament in Hindi films was not commensurate with the number of years he spent in the industry and the meagre number of films (just 65) he had to show for it. But it is the best work that God (and the public) wants, not the dregs of exhaustion. 26 silver jubilees, eight golden jubilees, four diamond jubilees are what Naushad’s CV reveals, besides many other things.

Why was his output so low? He insisted on doing only one film at one time. He laboured hard over his compositions and this required time. When he would construct the superstructure of the song, he would go into the minutest detail every step of the way.

If a particular word did not do the trick, he would ask the lyricist to change it or alternatively, to alter the line — never mind even if the lyricist was Shakeel Badayuni who was indelibly linked with Naushad, having done a large part of his oeuvre. It would take Naushad a minimum of 15 days to compose a single song. Tunes upon tunes would be composed till he eventually settled on a melody that satisfied him, keeping the film’s requirements in mind. He had the Midas touch — he was a trendsetter with a long line of musical hits. He was an arbiter of public taste.

He rejected a huge monetary offer for Azad (1955) because the producer wanted the songs within a month. Naushad wanted at least a year. C Ramchandra was made the music director and delivered the songs within a week (his condition was that he be paid a rupee extra over the offer made to Naushad). The songs were great hits. But Naushad was cut from a different cloth.

He straddled the two pillars of classical and folk music like a colossus and rode to the pinnacle of popularity during the 1940s, 50s and early 60s.

He was one of the first composers to bring folk music into films. With Rattan (1944), he showcased the immense appeal of folk music very early in his career. In later years also, he created several lively songs with a folk base and flavour that make them easy on the lips as well as ears. Some examples are Gaadi Wale Gaadi Dheere Haaq Re (Mother India, 1957), Nain Lad Jayi He (Ganga Jamuna, 1961), Mere Pairon Mein Ghungroo Bandha De (Sunghursh, 1968). He did something unique. Even when a song had a classical base, he introduced elements of folk. The classical blended imperceptibly into folk. His tunes were a rare blend of folk music energy and classical gravitas.

To adapt classical music to film music is a mammoth task. Naushad modernised classical music and added colour and freshness to it. But he never wandered off the limits of the musical boundaries. He believed in the purity of melody and never compromised in inserting an offending note to lend novelty. He never pandered to popularity. He had complete command over classical music and used it to enhance the song's appeal — Mohe Panghat Pe (Mughal-e-Azam, 1960) began in Raag Pilu and slipped into Raag Gaara. Yeh Dil Ki Lagi Kam Kya Hogi, from the same film, in Raag Jaijaiwanti had each antara in a different tune — according to the prevailing evening mood. In Baiju Bawra (1952), each situation had an appropriate Raag — Mohe Bhool Gaye Sanwariya (Bhairav), Bachpan Ki Mohabbat Ko (Maand), Tu Ganga Ki Mauj (Bhairavi), Jhoole Mein Pawan Ke (Basant and Pilu). Even Ustad Bade Ghulam Ali Khan broke his rule of keeping a distance from film music by singing two bandishes — Shubh Din Aayo and Prem Jogan Ban Ke.

He adorned his pieces with aesthetics which made the songs eternal. Listen to the concluding bars of O Duniya Ke Rakhwale (Baiju Bawra, 1952), the climatic onrush of melody in the second stanza of Meri Kahaani (Deedar), the choral effects of O Dur Ke Musafir (Uran Khatola), and so many others. His music was all about dignified eloquence and chaste reverence.

For Naushad, the melody was of course important, but the polish, more so. He knew every instrument in his orchestra and the best use for each in different parts of the song. He innovated with their pairing, say the flute with the clarinet, the sitar with the mandolin. He introduced the accordion — listen to Tarara Tarar from Dastan (1950), composed on waltz beat, the been, the brass instruments and the vibraphone. He was instrumental in improving recording techniques and modernising the orchestra. His songs were composed and arranged in a manner to bring about a vigorous nod of appreciation by the listener. They demanded a serious ear, not a casual play in the background.

Yet, it was not that the composition and its recording were planned to the last detail before entering the studio. The singers would come to his house for oral rehearsals. Mukesh made 23 trips to Naushad’s music room in his house — Ashiana — in Bandra, Bombay (now Mumbai) to rehearse Tu Kahe Agar from Andaz (1949). But they had no idea what the orchestra would be, which was also being readied separately. When the singer and the instrumentalists eventually came face to face at the time of recording, that was the first time the oral and orchestral integration was achieved. Moreover, at recordings, he would sometimes ask the singer to get experimental.

He believed in the power of the chorus to enhance the song's effect. The chorus was not used merely as filler but as an integral part of the song — O Door Ke Musafir (Uran Khatola, 1955), Dukh Bhare Din Beete Re Bhaiya (Mother India, 1957), Aayi Hain Bahaarein (Ram Aur Shyam, 1967). The song More Saiyan Utrenge from Uran Khatola has basic instrumentation and is almost entirely carried forward by the chorus replacing instruments.

He has many other firsts to his name- first to use of a 100-piece orchestra, first to use Western notation in India (the notation of Aan was published in a book form in London).

In the 1940s and 1950s, when Naushad led others followed. So gripping was his hold over the listeners’ imagination that film distributors would stand to attention whenever his name was mentioned. In the honours list in the film credits, his name would appear after the main hero and heroine. He would charge Rs 1 lakh, plus Rs 10,000 for orchestral charges. The producer could be present during the song recording, but not open his mouth. There was so much aura surrounding him that the trailer of Dastan (1950) that showed how he composed music for the film while hailing “Naushad, Naushad, chaalis karor mein ek hi Naushad”. His musical clout was unmatched. 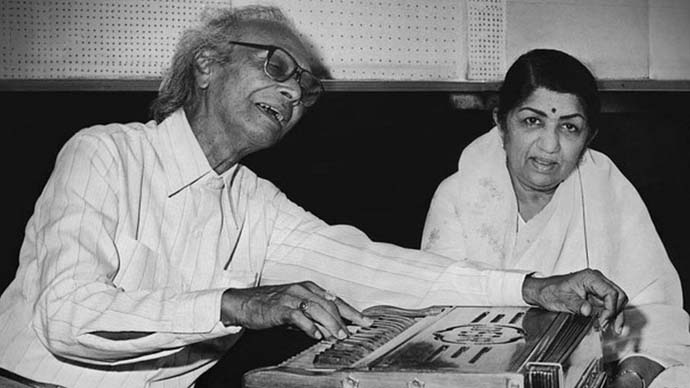 The four songs in Andaz sung by Mukesh and pictured on Dilip Kumar: Hum Aaj Kahin, Tu Kahe Agar, Toote Na and Jhoom Jhoom Ke, turned Dilip into a tragedian — as per the actor’s own admission. He was not happy with the tunes which were instrumental in creating the melancholic mood for him. But his misgivings were brushed aside. These songs have become legends. Similarly, Dilip objected to Lata Mangeshkar being the female singer, questioning how a girl from Maharashtra could ever sing in Urdu. Naushad again had his way. This was Lata’s first film with Naushad. Lata’s Uthaye Ja Unke Sitam, Tod Diya Dil Mera, Meri Ladli Ri Meri Ladli and others give a measure of the impact the singer had made and the faith that Naushad had in her.

Once Talat smoked in front of Naushad after recording his first song for him – Mera Jeewan Saathi Bichchad Gaya from Babul (1950). Talat in Babul was a huge success on Dilip Kumar. So popular the songs went on to become that Mehdi Hassan began climbing the ladder of success on the back of two songs (including Talat’s Husnwalon Ko Na Dil Do from the same film) at a public performance in Karachi in 1957. But that did not matter. As a punishment, he was replaced by Rafi, on the same Dilip Kumar, in Deedar. Naushad was a martinet in the music studio. His word was musical law.

In the later years, with the change of Naushad’s fortunes, Lata stopped coming to his music room for rehearsals. In Aadmi (1968), Naushad (who had a very successful run with Talat) was arm-twisted by Manoj Kumar to take Mahendra Kapoor as his playback singer in the song Kaisi Haseen Aaj Baharon Ki Raat Hai. This is despite the fact that Talat had done the recording and the album had been released. So, the film had Mahendra Kapoor while the album had Talat.

With the advent of the 1960s, Naushad’s sway lost a bit of steam. Films like Leader (1964), Saaz Aur Awaaz (1966), Dil Diya Dard Liya (1966) had outstanding songs. However, even those could not save them from sinking. This took their toll on Naushad’s stature — slowly but surely. The latter half of the 1960s saw a change in the taste of listeners. Naushad bravely soldiered on and reinvented himself in Ram Aur Shyam (1967), Saathi (1968) and others. Saathi saw a complete makeover with Kersi Lord arranging the musical pieces. The result was totally unlike anything heard in a Naushad film till then.

In the 1970s, the face of film music changed completely. Naushad could not reconcile with modern times. He was considered outdated and out of style. Tunes composed to themes that defied logic and reality did not work. His musical arteries had hardened in the changed scenario. His music and films flopped, and he gradually faded away.

Naushad passed away on May 5, 2006 — 15 years ago. But old masters never die. The music lovers and connoisseurs still adore him. His music can never blur his image, even with the changing times. Like a diamond, a genius is forever.

I remember an incident in the mid-1960s very vividly. Shanti Mathur, the playback singer, had just finished singing her song Nanha Munna Rahi Hoon (Son of India, 1962) at my uncle’s (music director Late Satish Bhatia) place. Every person in the room was teary-eyed. The sentiments it roused — the emotional fervour, the pride and hope, the love of country — are fresh in my mind even today. That this song still retains its original sheen came as a pleasant surprise when my daughter told me it was one of her favourite songs and that my grandson had also loved it and started learning it.

Also read: Why there cannot be another Talat Mahmood