Sanjay Leela Bhansali has hopefully managed to assuage the fears of the Rajput Sena and Hardik Patel.

Now that Indian Express has announced that the dream sequence permitting Allauddin Khilji to romance Rani Padmini is to be scrapped (poor Allauddin, sigh! A visionary emperor but forbidden to dream), Sanjay Leela Bhansali has hopefully managed to assuage the fears of the Rajput Sena and Hardik Patel.

Their fears cannot be dismissed as unfounded, for Bollywood and television, like fables, have a greater hold over popular notion than history texts. As Napoleon once famously remarked, "What is history but a fable agreed upon?"

Saving our history from being mangled is desirable. Until now, history text writers had their way, leaving the modern generation fairly lost. But what of historical fiction? That surely is open to reinterpretation? I, for one, look forward to a celebration of our women against the magnificent backdrop of exotic India set in a time period when wealth was so abundant that ignoring it was the norm. Popular notion screams poverty but that is another story.

Bhansali calls his film Padmavati after the work of the sufi saint of Jais (a city in the Amethi district of Uttar Pradesh) - Malik Muhammad Jaisi - who flourished during the reign of Sher Shah. His poem, written in Awadhi with a sprinkling of Persian - the lingo of the times in North India - is dated to 1540 AD.

It was a time when Indians were still getting used to the newly introduced rupiya and the laying of the Grand Trunk Road was underway, promising even higher returns. Oblivious, the one-eyed saint walked from village to village beating his drum, telling a story that was over 200 years old. A story, not of his tribe but of his people. Paying homage to god and his prophet, the Quran, and to Sher Shah without whom such a task would be impossible. He recited:

Their black hair floated on the water like poisonous snakes, which bore lotuses in their mouths, and met the waves. Up rose they like tender shoots on pomegranates or vines. Yea, it was as if the very branches of love uplifted themselves.

They were, as it were, tendrils prepared by the new spring, and become manifest, full of nectar. The lake could not contain the whole universe, for the moon had entered it with all the stars to bathe.

Padmavati, then a lithe young teenager, was playing with her friends in the waters of a lake in her homeland, Sri Lanka. Each child, regardless of her complexion, was a beauty in her own right. Their young faces lifted out of the water like white lilies and were ringed around the red lotus face of Padmavati.

Jaisi’s Padmavati was an ode to the beauty of Indian women. The women of Sinhala are all Padminis, says he - Chitrini, Shankhini and Hastini being the other three kinds.

Of the 12 chapters, ten are devoted to the period before the king of Chittor even set his eyes on her. The first dwells on the opulence of Sinhala (Sri Lanka) and reads rather like the description left behind by Marco Polo and Barbosa, the Portuguese businessman who came to survey the markets in 1502. One small chapter describes Chittor and the lineage of Ratan Sen. 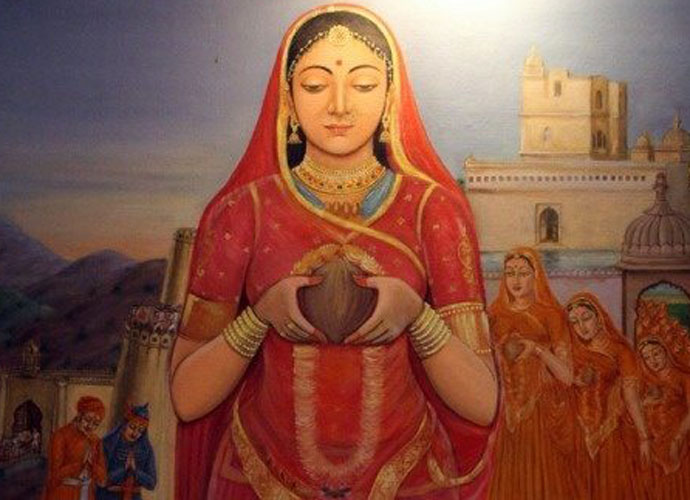 Sanjay Leela Bhansali calls his film Padmavati after the work of the sufi saint of Jais.

The remaining eight are dedicated to the beauty of Padmavati (also known as Padmini): the growing girl at play, consulting with her talking parrot Hira Mani (a Brahmin in a parrot’s body), Hira Mani’s description of Padmavati to the beauteous narcissistic Nagmati, who like Snow White’s stepmother lived in constant need of validation, and finally having escaped an attempt on his life, Hira Mani regales the king with the grace and intelligence of his young mistress and her sandal-fragrant limbs.

Grierson, who states that only a part of the work is by Jaisi, does not include the two last chapters in his translation, making one wonder if the story, as we know it, was ever a part of the original.

The Modern Vernacular of Hindustan published by The Journal of the Asiatic Society in 1889, presents a synopsis of chapters 11 and 12: Ratan Singh goes to Ceylon dressed as a mendicant, succeeds in marrying Padmavati and brings her back home.

Raghav, a dismissed astrologer of Ratan Singh’s court, joins Allauddin’s court and makes sure the beauty of the queen of Chittor becomes common knowledge. Allauddin, in a mad bid to possess her, lays siege but is unsuccessful. Stratagem is resorted to and he succeeds in capturing Ratan Singh’s person. He would be held hostage until she surrendered.

Deb Pal, Raja of Kambhalner (Kumbhalgarh), a subordinate, chooses the moment to woo the defenceless Padmini and is spurned. Ratan, released from his dungeon by the valour of two heroes - Gora and Badal, the former laying down his life for his king - seeks instant revenge for the injury caused to the dignity of the queen. Attacking Kambhalner, he kills Deb Pal but is in turn critically wounded. He is brought back to Chittor to die.

His two queens, Padmini and Nagmati, immolate themselves on his pyre. Allauddin’s advance guard breaks through the defences. They enter the fort only to be greeted by the piles of still warm ashes.

A poet receives no recognition in his own land or amongst his own people, said Jaisi and as he wandered through Hindu villages he called out to the scholars and bards to correct his verses.

Research, peer review, publishing and holding on to copyrights were always fraught with difficulty. Less than 50 years went by and Firishta, the historian, changed the name of Rawal Ratan Singh to Bheem Singh and the duration of Allauddin’s siege of Chittor to 13 years.

Rani Padmini changed from the queen of Chittor to the wife of the regent overseeing the kingdom during the minority of the legitimate king. And her supreme sacrifice changed from sati to jauhar.

Of the two Rajput texts available, Khuman Raso, said to be composed during the reign of Rawal Khuman in the 9th century, was written in 1715 during the reign of Maharana Sangram Singh II, and it is unanimously agreed that only parts of Chand Bardai’s Prithviraj Raso are original.

Written in Braj-bhasha, it tells the story of the 12th century Rajput emperor Prithiviraj Chauhan. The remainder was composed after the 15th century. Prithviraj Raso does not tell the 13th century story of Padmini. Instead, it refers to Sanyogita, Prithviraj’s beloved, as Padmavati.

Albert Roussel’s musical titled Padmavati, last performed in 2008 at Paris, was directed by Sanjay Leela Bhansali. Roussel has chosen to follow Jaisi’s version of the story with fanciful little touches of his own.

Queen Nagmati has been left out of the tale and Padmini, at the behest of her husband, raises her veil before Allauddin Khilji, a departure from the story of her reflection in the mirror or pond. She stabs her dying husband with a long spear or trident in the end, rising with him from the flames of the pyre to ascend the steps of the after-world.

The Mewar Encyclopaedia, put together under royal patronage, acknowledges that the story is an embellished version of Khilji’s siege of Chittor and the jauhar that followed. It was the fourth Rajput fort to fall, Jaisalmer being the first in 1294 AD, Ranthambore in 1301, Asirgarh in 1302 and Chittorgarh in 1303.

The sultan was in the process of securing the trade route by which caravan loads of goods made their way to the ports of Surat and headed out for sale in the international markets. The Rajputs who conducted lightening raids and disappeared back into the security of their hilltop forts needed to be curbed. Padmini was a bardic creation to soften the blow for the generations to come.

#Sanjay leela bhansali, #Deepika Padukone, #Padmavati
The views and opinions expressed in this article are those of the authors and do not necessarily reflect the official policy or position of DailyO.in or the India Today Group. The writers are solely responsible for any claims arising out of the contents of this article.