Let us not forget that Tamil Nadu is not a film set.

"To be, or not to be." This is one of the most oft-quoted lines in the English language. These are the opening words in the so-called nunnery scene in William Shakespeare's Hamlet, a gripping play that has all the treacherous elements of modern-day politics. And the line, once again, seems so apt in what is happening today in Tamil Nadu – sheer confusion confounded with some leading men in tinsel town generously adding to it.

The latest addition to this disorder is a quip by a very interesting southern Indian actor, Prakash Raj, who for years and years was dumped into doing the most villainous and vicious of roles in movie after movie. But there have been moments of sunshine in his acting career when we saw him in Priyadarshan's Kanchivaram (where the actor essays the role of a terribly impoverished silk weaver in a temple town close to Chennai) and, among some others, Mani Ratnam's engaging O Kadhal Kanmani (as the caring husband of a woman stricken with Alzheimer's).

The other day he came out with a famous quote: "Actors in politics are a disaster." He said during a media interaction at the Press Club of Bangalore: “I do not subscribe to the idea of actors Rajinikanth, Kamal Haasan, Pawan Kalyan and Upendra launching political outfits just because they are actors, though I am a fan of all these stars.

“They should not enter politics only because they are popular. It is a disaster. They should come up with a clear focus on issues facing the country and win the trust of the people. And we should not vote as fans. But as responsible citizens.

“I won’t vote for them just because they are actors. When an actor ventures into politics, I want to know, what his manifesto is, how would he understand the problems being faced by people like me. If I am convinced, my vote will go in favour of him and his party. I will not endorse them and their parties just because I am disillusioned with other political parties,” Prakash Raj said without mincing words.

In recent weeks, the actor has been trolled and seen as a Left-wing sympathiser, because he questioned Prime Minister Modi's silence on the murder of the Kannada journalist and social activist, Gauri Lankesh. “My comments stemmed out of sheer concern. I don’t speak to please somebody,” he clarified then. 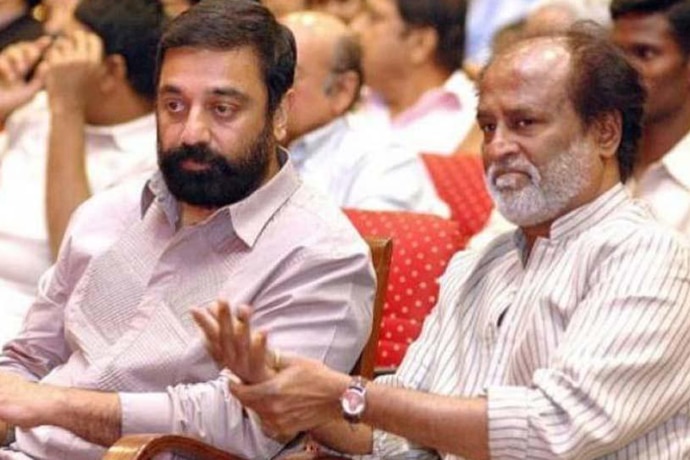 Does a Haasan or a Rajini have any political acumen or foresight or experience to run Tamil Nadu?

Prakash Raj's comment on actors and politics follows months of uncertainty in Tamil Nadu after the death of chief minister J Jayalalithaa last December, and the frequent to-be-or-not-be-a-politician and get-into-Fort-St-George by Haasan and Rajinikanth has merely added to the dilemma and disorder.

We have Haasan, sitting on the fence – wondering whether to be or not be a politician. We have also been watching Rajinikanth, do the same – a man whom the masses in the state feel is the real hero, the real superman. Not Haasan. Rajinikanth has for years been keeping his adoring fans on tenterhooks. Will he or will he not jump into the administrative arena and lead his millions of admirers to “salvation” in a state gone to seed after Jayalalithaa.

There are stories, and rumours too – now doing the rounds – of Rajinikanth announcing a new political organisation on his birthday, which falls on December 12. He will turn 67.

In an already-vitiated political atmosphere in Tamil Nadu – with several power centres vying for a foothold in Fort St George - the state desperately needs administrative stability and ability. This Haasan or Rajinikanth may or may not be able to give, because we have seen political novices in India emerge in a blaze of glory, promising people the moon, only to vanish soon after in a fog.

Be that as it may, I feel that what Prakash Raj said made sense. Politics in India has become one big game of hero worship and idolisation – a fact that has been in some way responsible for the mess this country is in today.

After all, does a Haasan or a Rajini have any political acumen or foresight or experience to run Tamil Nadu?

Does Haasan or Rajinikanth have a clear political agenda to address the multitude of challenges facing Tamil Nadu? I have my doubts, and serious ones at that.

As is often being done, it is pointless to compare these two Tamil actors with men like CN Annadurai, MK Karunanidhi and MG Ramachandran (who all came from a cinema background) – who had a clear-cut ideology and worked hard on the ground before asking for people's mandate. Dravidian ideology – which was propagated by both the Dravida Munnetra Kazhagam and the All-India Anna Dravida Munnetra Kazhagam – had a well defined purpose that tried to solve societal inequalities, brought about by age-old caste supremacy and divisions and prejudices.

In the final analysis, Prakash Raj had a point when he cautioned people against voting as gushing fans or admirers. Yes, voters must pause and ponder before they press the button on the electronic machine.

Let us not forget that Tamil Nadu is not a film set - where actors are given scripts to play their parts and directors push and prod the painted men at every turn of the camera.

Also read: Kamal Haasan, a big dream, but only a small sure step till now

#Rajinikanth, #Kamal Haasan, #Politics, #Prakash Raj
The views and opinions expressed in this article are those of the authors and do not necessarily reflect the official policy or position of DailyO.in or the India Today Group. The writers are solely responsible for any claims arising out of the contents of this article.